A star is not yet born in the revival of Funny Girl. Beanie Feldstein is just a gleam in her producer’s eye. It’s a charming gleam, possibly a lucrative glint, but not the sunburst of ambition and verve the actress playing Fanny Brice requires to transform this 1964 backstage musical with a gorgeous score and a so-so book into a vehicle for voracious, unstoppable talent.

Feldstein (Booksmart) has oodles of pluck and mugs like a mischievous child for indulgent parents, resorting to the explosive cackle that made her turn in 2017’s Hello, Dolly! such a delight. But Fanny, the legendary Jewish comedian and singer who becomes a stage darling before and after World War I, needs more: She has to be nervy, messy, a bit crazy, and of course armed with a voice that knocks the rafters out of their sockets. Jule Styne’s brassy, rollicking, jazz-carnival of a score gives its leading lady a show-offy comedy brag “I’m the Greatest Star,” the syrupy but unforgettable love ballad “People,” and a get-outta-my-way, anthemic showstopper: “Don’t Rain on My Parade.” That’s just the first act.

It’s such a bonanza of great tunes and comic bits, what Broadway dreamer could resist? I wish the gamble had paid off. Feldstein comes across as too sensible, too sane, too body positive to incarnate the cauldron of self-mocking, self-aggrandizing, and self-doubt that drives Fanny to success in the Ziegfeld Follies and then into the arms of handsome Nicky Arnstein (Ramin Karimloo, suavely solid). The latter, a debonair professional gambler, was supposed to be the love of her life, but he becomes an emotional and financial weight around her neck. In the end, Fanny has but one paramour: the spotlight.

If Feldstein had sheer lung power and intuitive richness in phrasing, you could forgive her acting for being merely cute and eager, unable to touch the sadness and anger in the character. But her singing is as studied and limited as her scene work. She has a thin, nasally voice that no amount of manipulation by sound designer Brian Ronan can coax into sonic depth. I don’t mean that Feldstein sings badly—she can belt a button or smolder in the gentler numbers—but she doesn’t let the music flow through her or show lyrics popping into her head.

This is the first Broadway revival of Funny Girl, whose original run closed two years before I was born. So it’s fair to ask where I get off saying how Fanny should and shouldn’t be played? The sacred name must be uttered: Barbra Streisand. She originated the role on Broadway and starred in the 1968 movie version. Streisand’s nimble, soaring, honey-and-steel vocals are there on the cast album; as an actor, her ineffable blend of sexy and zany are on celluloid. Her Fanny was a unique blend of Mae West, Groucho Marx, and Greta Garbo—saucy, irreverent, and suffering soul in one package.

No actor should have to fill such vast footwear, so let’s discover what Feldstein does instead of a Streisand impression. In her earnest, somewhat naïve approach, she turns the story of Funny Girl from the rising up and wising up of a great, if troubled, trouper into the wish-fulfillment fable of a moderately gifted young lady. Who knows? Maybe that angle is what Feldstein’s fans would prefer, in an age where anyone with an Instagram account and 17,000 followers thinks they’re celebrity influencers. But on the stage of the August Wilson Theatre, one feels a hollowness—a well-rehearsed and dutiful hollowness—where there should be restless combustion.

Despite all, there’s much to divert: hearing Styne’s glorious music under the baton of Michael Rafter; plentiful, joy-giving tap numbers choreographed by Ayodele Casel; eye-popping scenery by David Zinn that combines the bricks and steel of Brooklyn slums with the glossy limelight of Broadway; and racks of gorgeous costumes for both Follies girls and poker-playing ladies devised by Susan Hilferty.

Director Michael Mayer gathers all the elements in a visually sharp, tight-paced production stuffed with ace supporting players: Jane Lynch as Fanny’s loving but cynical mom; Jared Grimes as her tap-happy friend and booster, Eddie; and Peter Francis James as a starchy and imperious, but ultimately fatherly Florenz Ziegfeld. Jokes and dialogue in the original Isobel Lennart book have been sweetened and freshened up here and there by the great Harvey Fierstein, even if the second act remains a draggy downer. Unexpectedly, Fierstein’s involvement made me think, for better or worse, of his past projects: If I wanted Tracy Turnblad, I’d stream Hairspray, but I expected a funny girl. 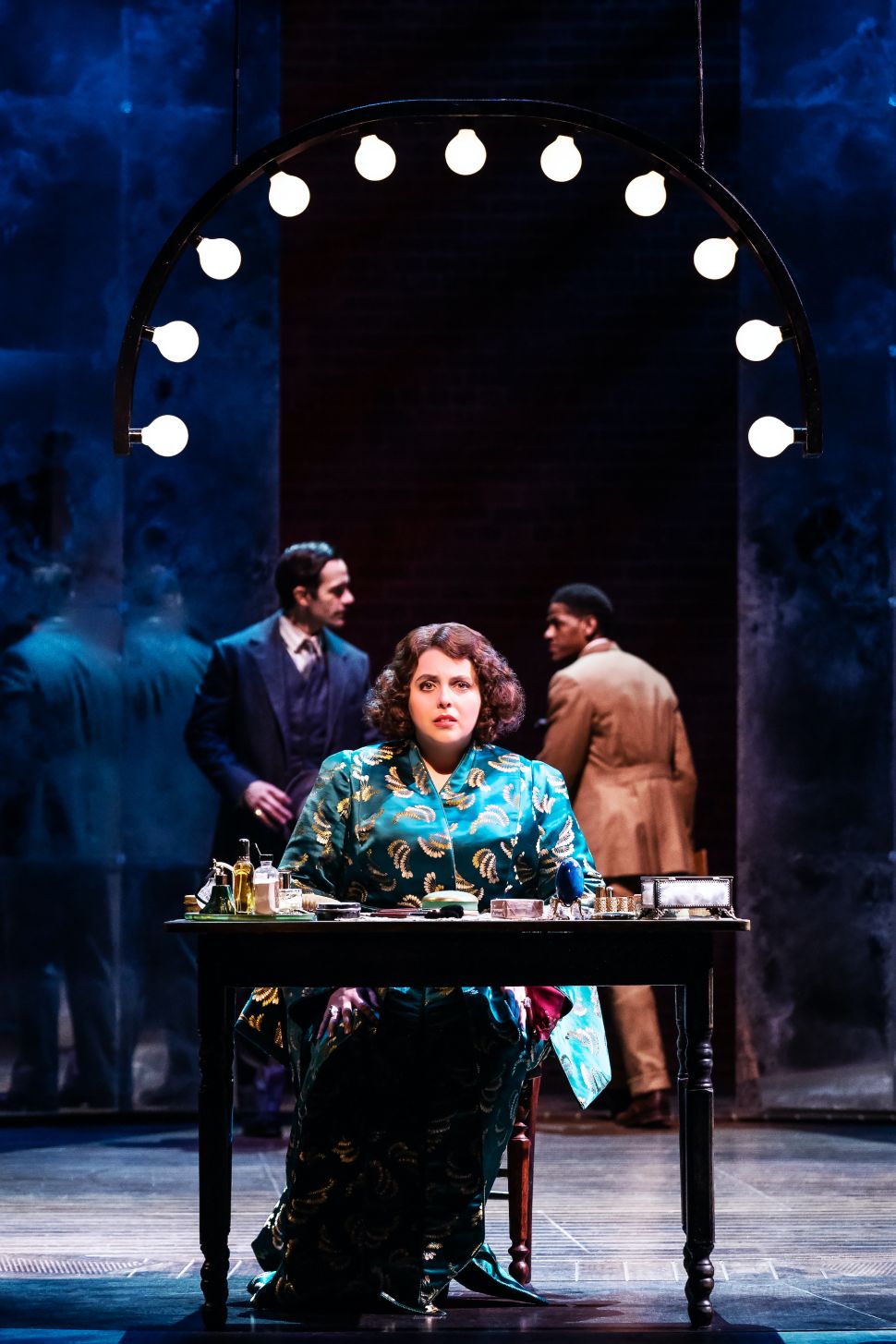