“What was the soup?” My friend kept asking on the subway. We had just seen the Daniel Craig–Ruth Negga production of Macbeth directed by Sam Gold on Broadway, which ended with the cast sitting before the curtain ladling out bowls of stew from a large pot that previously served as the Weird Sisters’ cauldron. Bobbi MacKenzie, the youthful actress who plays Third Witch, sang something wistful (I learned later it was “Perfect” by Gaelynn Lea). I scribbled a lyric: Tragedy viewed from its own lens / But just out of frame sits an old friend. Evocative.

“What was the soup?” Came the consommé query again. He was asking not only its ingredients—is it vegan, is it yummy—but what did the soup signify? During the course of Shakespeare’s gory tragedy, we watched the witches combine chopped celery, veggie broth, fresh soldier blood, and a bucket of puréed human leg. By applause time, after the regicidal Scots tyrant had been beheaded and his scheming, somnambulating wife had died, the actors were chilling, slurping communal chowder. Had we witnessed a satanic ritual by a group of traveling cannibal players? Were all the characters witches? Or was it a joke, taking the piss out of Shakespeare, the idea of tragedy, and us?

I have more questions than answers for this engaging if unfocused production, but I will venture this interpretation: Sam Gold’s Macbeth is about a group of downtown hipsters (some of them famous film stars!) who…put on a production of Macbeth. A deeper dramaturgical or academic reading’s above my pay grade. (Anyway, what do critics mean when we talk about a coherent production of Shakespeare? As if these 400-year-old texts are consistent with modern dramaturgical models, especially if played uncut or obsolete language goes un-tweaked. We really mean a coherent butchering of Shakespeare.) Some of the director’s choices are cheeky, such as casting the dryly funny Michael Patrick Thornton—a voice clone of the late comedian Norm Macdonald—who rolls his wheelchair around the stage dispensing lines in a sardonic deadpan that turns a murderer into a smartass. Other devices are more conventional but pumped up to eleven-plus.

Take the fog. There’s tons of it, easily triple the volume of cloudy stuff than you get in a standard-issue Macbeth (almost approaching the aviation hazard achieved in the Joel Coen movie). A couple of backup witches (Eboni Flowers, Che Ayende) distribute the fluffy matter through handheld smoke machines. When the murdered Banquo’s ghost appears to the raving Macbeth at the banquet, multiple figures in rain ponchos cross the stage with fog pouring out of the hoods. Looks cool. No idea what it means.

But what an ensemble. For anyone who has followed Off-Off experimental theater for the past 20 years, the cast is a surprise birthday party you didn’t expect. There’s the rascally Paul Lazar of Big Dance Group, a saucy noodle of a man, doubling as a potbellied Duncan and an abject Porter. That princess of whimsical sorrow, Maria Dizzia, marinates First Witch and Lady Macduff in her vinegar wit. Whatever he’s in, my eye always wanders to Phillip James Brannon (Second Witch, Ross) who exudes tremendous empathy and skepticism, always something roiling beneath his sweet exterior. And the radiant Amber Gray, a mama-bear Banquo, delivers her verse with a musicality and clarity that should be taught in schools. I’d watch her speak the speech of every role in the Scottish Play.

Yet other actors must be given a chance, like Daniel Craig and Ruth Negga. These extremely good-looking celebrities are old hands at live Shakespeare. Before the pandemic, I delighted in Negga’s valiant, teen-heartthrob Hamlet at St. Ann’s Warehouse. In 2016, Craig’s Iago went full-psycho for Sam Gold’s militarized Othello at New York Theatre Workshop. The slender, live-wire Negga, whether sheathed in designer Suttirat Larlarb’s cascading golden dress or a simple shift for bed, makes an iron-willed Lady Macbeth, her Irish brogue drumming out the iambic pentameter with peaty precision. She endows Lady M’s greatest hits—“unsex me here,” “I have given suck” and “out, out, damn spot”—with a sensual assurance and feline restlessness.

Mr. Ex-James Bond is easily her match, crafting an unsentimental portrait of Macbeth as a conceited and shallow bully, with a cowardly streak. This privileged slab of a man sulks and skulks about Dunsinane in his pajamas, a vain little ruby ring on his pinky, shrugging on a fur coat for his Act IV facetime with the witches, strutting and fretting as he realizes what a colossal mistake he and his spouse made. I like the anti-romantic take on Macbeth, who’s only a hero to cops, fascists, and Elon Musk. These Macbeths might be a fan-favorite hatewatch on The Real Housewives of Birnam Wood.

So, we’ve got a cast strong on personality and technique; stylish, sexy costumes; striking tableaux boldly (and blindingly) lit by Jane Cox; a minimalist tricksy set by Christine Jones (walls literally close in on the villain) that deconstructs most gracefully; and a vague horror-movie vibe (the kitchen witches’ wholesome menace gave me Ari Aster chills). What more could you want? Personally I have no desire for Macbeth set during the Civil War, or in space, or  the Trump Administration. I won’t say I felt completely satisfied (for that, give me a truly kickass Macbeth-Macduff fight). But I was entertained, and heard some great language spoken by legends of my time. And evil, in the end, was defeated. I think.

What was the soup? Whatever you want it to be. 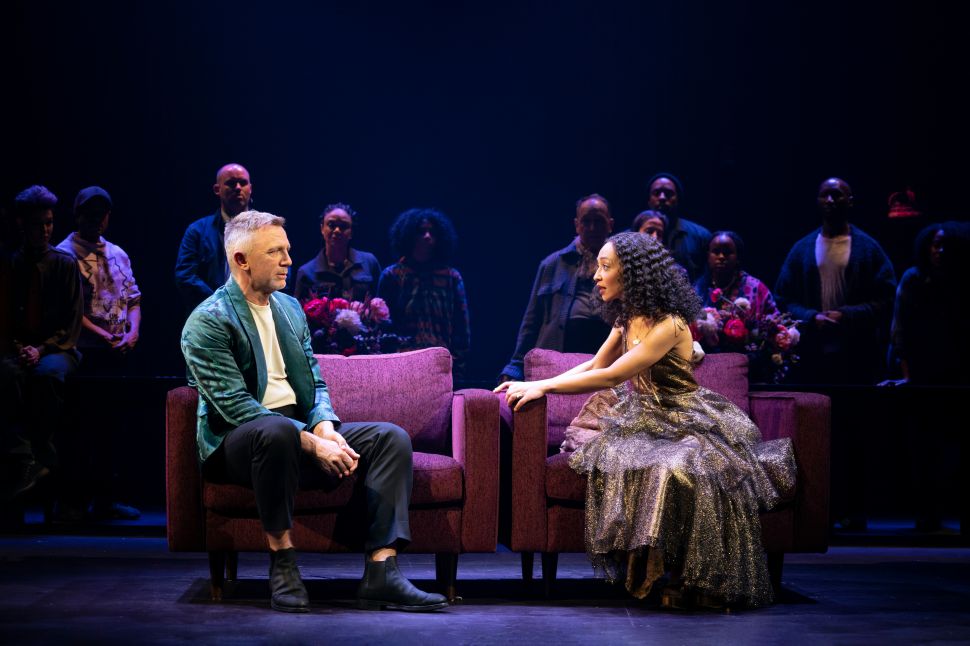