I’m quite curious who producers of Martin McDonagh’s Hangmen think the audience is: fans of the Anglo-Irish playwright who’ve somehow never seen a play by Harold Pinter or Joe Orton? Or is it those who have, and don’t care if McDonagh is lazily aping them for a shaggy, lightweight satire on capital punishment?

Whichever, it’s clear that, after deciding to write about the end of hanging in England circa 1965, McDonagh went straight to those masters of subversive black comedy (plus the lesser-known David Mercer) and never looked back. He’s got the Ortonian quip down pat (“If you’d’ve just tried to relax you could’ve been dead by now”); he distributes a handful of Pinter Pauses; and his allusions to gorillas and girls in mental hospitals rings the Mercer bell. Angry Young Mod Peter Mooney (Game of Thrones’ Alfie Allen) insists that he’s not “creepy” but “menacing,” an adjective eternally applied to Pinter’s verbal evasions. Sure, it’s a cool period to imitate, but when you mix such a derivative method with McDonagh’s adolescent glibness, the vibe is mildly funny and mostly irritating.

After some scuffling, our man gets the rope and the hole in the floor, and the scene flashes forward two years. Harry has retired and runs a pub in Oldham in the north. He’s a bullying, self-satisfied walrus of a man, blustery king of his castle, with a peppery but submissive wife, Alice (Tracie Bennett), and a mopey 15-year-old daughter, Shirley (Gaby French), both female-shaped sketches rather than characters. Harry’s regular customers are a dimwitted trio of hangers-on: Charlie (Ryan Pope), Bill (Richard Hollis) and the elderly Arthur (John Horton), whose bad hearing requires jokes to be repeated with diminishing comic returns.

The government has just abolished death by hanging and local newsman Clegg (Owen Campbell) begs Harry for a quote. Harry gruffly puts the reporter off, until Clegg threatens to go to Pierrepoint, at which point Harry’s ego gets the better of him. Meanwhile, Mooney arrives, a young and impudent Londoner who draws Harry’s suspicion and dislike immediately. The stylish lad quickly insinuates himself with Alice as a potential lodger, and with Shirley as a potential love interest. When Mooney’s behavior becomes erratic, and he disappears the same time that Shirley goes missing, Alice and Harry start to worry.

Compounding Harry’s concern is a visit from mousy, stuttering Syd (Andy Nyman), Harry’s old assistant, and a man he turned into police for distributing pornography. Syd raises new concerns about the innocence of a man they hanged years ago, who may have taken the fall for the very Mooney who visited Harry in his pub. Is Mooney a killer, come back to gloat at his would-be assassin?

After intermission, McDonagh gives his Plot-o-Matic a few more cranks, but what keeps you focused on Hangmen is the retro mood and the superb ensemble, not innovative storytelling or genuine insight into character. His plays are tightly constructed, with dialogue that uses repetition and profanity to musical effect, but they are woefully mechanical. Once you realize that McDonagh’s M.O. is crudely to undermine expectations, you expect the undermining, and boredom sets in. After nearly 30 years, his view of humanity has barely evolved: men are brutal bastards, women aren’t much better, law and justice are a farce, and I’m rather handsome.

Matthew Dunster orchestrates a production rich in dank, muddy period detail (you can practically smell the stale lager and cigarettes wafting off Anna Fleischle’s sets and costumes). Perhaps he leans a bit too hard on the “louder, faster, funnier” directive, since the actors’ northern accents combined with hysterical shouting at an accelerated pace often blurs sense (McDonagh puppets spew verbiage, but in Shirley’s final, flustered outburst, there’s story to catch). Otherwise, the highly talented ensemble rises to and above their jokey, mono-level material, with Threlfall intimidatingly good as an obtuse functionary who has let routine strangle his empathy. In the end, justice isn’t served, no one changes, there’s just a corpse to dispose of. There could have either been a devastating tragedy or an outrageous farce in the story of England’s second-best hangman, but this one’s dead from the neck up. 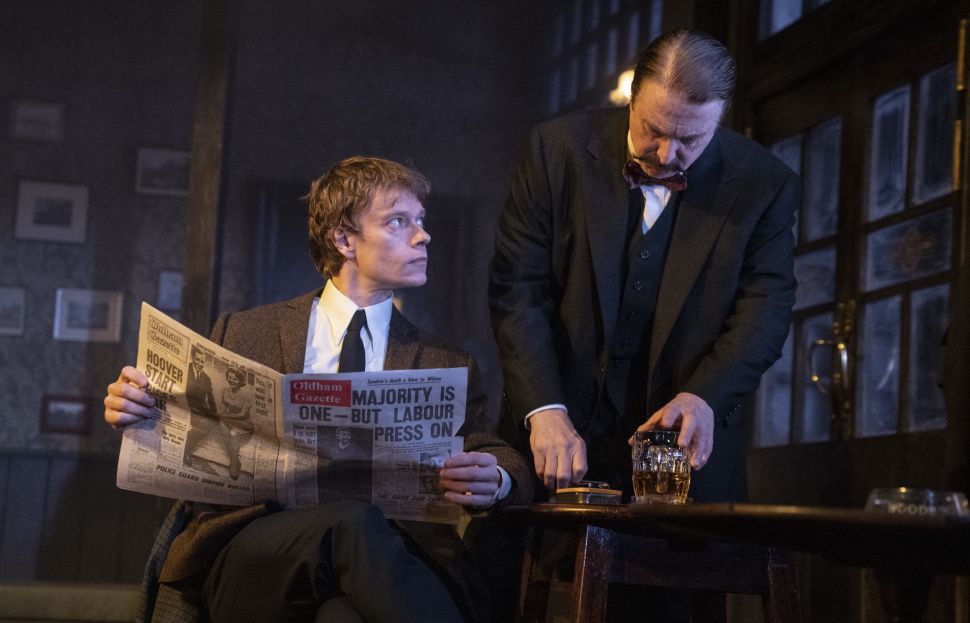