In the weeks leading to its premiere, hundreds of online opera lovers trolled—sight unseen–Simon Stone’s updated, relocated production of Lucia di Lammermoor on Facebook and Instagram. Many insisted that changing its setting from 17th century Scotland to contemporary America betrayed its creators’ intentions. But the biggest shock at the Metropolitan Opera Saturday night was how traditional Stone’s vision of Donizetti’s beloved opera of madness, murder and suicide proved to be.

Commentators took special offense that the new Lucia would take place not in a sumptuous castle but in a poverty-stricken, drug-infested Rust Belt town. But rumors that Lucia would be a crystal-meth addict proved to be unfounded; Nadine Sierra, lovely and sympathetic, was first seen in blue jeans and a puffy jacket, just another girl unlucky in love. Tricked by her nefarious brother into believing her lover is faithless, she bashes to death with a fire extinguisher the poor rich guy chosen to save her family on their wedding night after which she sings opera’s most famous Mad Scene!

Reimaging familiar works from the past, particularly moving their time period to the present or near-present day, has become so common over the past few decades that it’s no longer trendy. Regietheater–where a director’s sometimes wild ideas can overwhelm the music—has become the accepted and expected practice in much of Europe, but at the Met it continues to stoke controversy even in its mildest forms.

Lucia’s checkered production history at the Met dates back thirty years: Francesca Zambello’s 1992 much disliked version starring June Anderson amid a stage full of coffins was replaced just six years later by Nicolas Joël’s blandly traditional take. Theater director Mary Zimmerman then made her Met debut on opening night of the 2007-08 season with a Lucia in which the ghost the heroine sings about in her opening aria actually appeared on stage. More problematic was Zimmerman’s decision to bring back Lucia as another ghost to “assist” her grieving lover in killing himself. Yet that production, updated to Victorian time and conceived as a vehicle for Natalie Dessay, lasted more than a decade, considerably longer than the previous two.

On the other hand, it’s difficult to imagine Stone’s complex, technically challenging version will be around for very long. Like the theater stagings of Belgian director Ivo van Hove that have intrigued New York theatergoers over the past decade, Stone’s Lucia relies heavily on live and pre-recorded video for much of its immediacy. One of the production’s most serious defects though arises from demanding that the audience frequently split its attention between the action transpiring on stage and the often-contrasting video feed above it. Mercifully, English subtitles translating the Italian text are projected eliminating the need to consult the Met titles console.

In addition, Lizzie Claehan’s remarkable enormous turntable set depicting locales in the town in which this Lucia takes places never stops spinning! We visit Lucia and Enrico’s house, the food mart where Edgardo works, the pharmacy from which Lucia retrieves her daily Methadone dose, a water treatment plant, etc. For no good reason, during the first-act duet, the lovers take a 360° walk around the seedy drive-in which is inexplicably showing My Favorite Brunette, a 1947 Bob Hope-Dorothy Lamour comedy. Similarly, the normally tense Wolf’s Crag confrontation between Edgardo and Enrico became a drunken stroll through town. If the Met’s turntable ever malfunctions, the company will have to call off that night’s Lucia!

And yet for all its misfires, Stone’s intricately deglamorized Lucia was never boring. Sierra clearly inspired the director: her movie star looks and quiet charisma were compulsively watchable. Unfortunately, her fiercely committed portrayal lacked a needed fragility that would foreshadow the sad girl’s descent into murderous mania. While being browbeaten by Artur Ruciński’s toxic, vividly inked Enrico or denounced by Javier Camarena’s cuddly, yet enraged Edgardo, Sierra continued to radiate a sturdy independence that suggested she’d survive just fine.

Drenched in blood à la Sissy Spacek’s character in Carrie, Sierra’s searing mad scene inevitably involved an elaborate promenade through Rust Belt-ville, followed by Matthew Rose’s frustratingly ineffectual priest and half the town. For once the video above the stage illuminated rather than distracted: the film contrasted the mad girl’s hoped-for happy life with Edgardo as she encountered the grotesque corpse of her unwanted husband.

If the soprano embodied Stone’s concept with heartbreaking pathos, Sierra’s singing failed to fully live up to the exacting bel canto tradition embraced by previous Lucias. Nearly all of the world’s acclaimed coloratura sopranos have appeared in Donizetti’s iconic opera at the Met since it was presented by Marcella Sembrich on the second night of its inaugural season in 1883. Subsequent new Met productions featured superstars Amelita Galli-Curci, Lily Pons and Joan Sutherland. While Sierra’s florid singing was often efficient, it consistently lacked the hoped-for bravura thrills, she attacked her numerous trills oddly. However, the warm middle register and plangent legato made her interplay with the glass harmonica during the mad scene unusually affecting.

Her warmth clearly inspired Camarena, usually not the most detailed actor, to partner her effectively. Their striking first-act interplay from his rescuing her from a knife-wielding mugger to their ecstatic motel-room “Verranno a te” gave a fresh complexity to their relationship.

The question of whether the demanding role of Edgardo suited Camarena’s lightish tenor wasn’t definitely answered Saturday night. He seemed off-form for much of the first two acts though high-note fanciers will be delighted to know that he took the high E-flat in love duet! It’s possible he may have been depleted by what must have been an exhausting rehearsal period. But he gallantly rose to the demands of the final scene singing with the open-hearted earnestness that won him the hearts of Met audiences over the past decade.

In the powerful Wolf’s Crag duet, however, he was consistently overmatched by Ruciński’s aggressive Enrico. The Polish baritone whom the company has been featuring as Marcello in La Bohème and Manon’s Lescaut gave the Met notice that it might have a new star on its hands. Many nights one’s mind may wander during the Enrico’s opening scena while impatiently awaiting Lucia’s entrance, but instead Ruciński’s melting aria followed by two fiery verses of his cabaletta capped by a very long-held, blazing high note elicited the performance’s first rousing ovation.

Rose delivered his empty platitudes as Raimondo in a most mellifluous manner, though his narrative recounting the murder could have been more arresting. A potent and sympathetic Deborah Nansteel returned to her debut role of Alisa, while tenors Alok Kumar’s chaotic Normanno and Eric Ferring’s reedy Arturo let down the home team.

The Donizetti Opera Festival in Bergamo, the composer’s hometown, knew what it was doing when it grabbed Riccardo Frizza for its music director in 2017. Where bel canto works at the Met are often compromised by lax batons, his Lucia crackled with excitement while still affectionately accompanying his principals.

If one turned off the video and positioned Stone’s personenregie in an anonymous setting, it would likely strike most as a conservative, unsurprising Lucia. The vigorous booing that had been predicted when the production team appeared for its bow failed to materialize. Sure, there were some half-hearted jeers but they were quickly drowned out by hearty cheers.

Some may find the entire enterprise a too demanding, distracting way to present Donizetti and Cammarano’s familiar, doomed characters, though Millennials and GenZers might welcome its multi-media approach. In any case, Stone doesn’t at all rewrite the drama the way he did recently with Wagner’s Tristan und Isolde at France’s Aix-en-Provence Festival.

His frustrating yet frequently gripping Lucia may not be a keeper for the Met and it is difficult to imagine it without the luminous Sierra, so definitely try to catch it in the remaining eight performances or via the HD transmission scheduled for May 21. 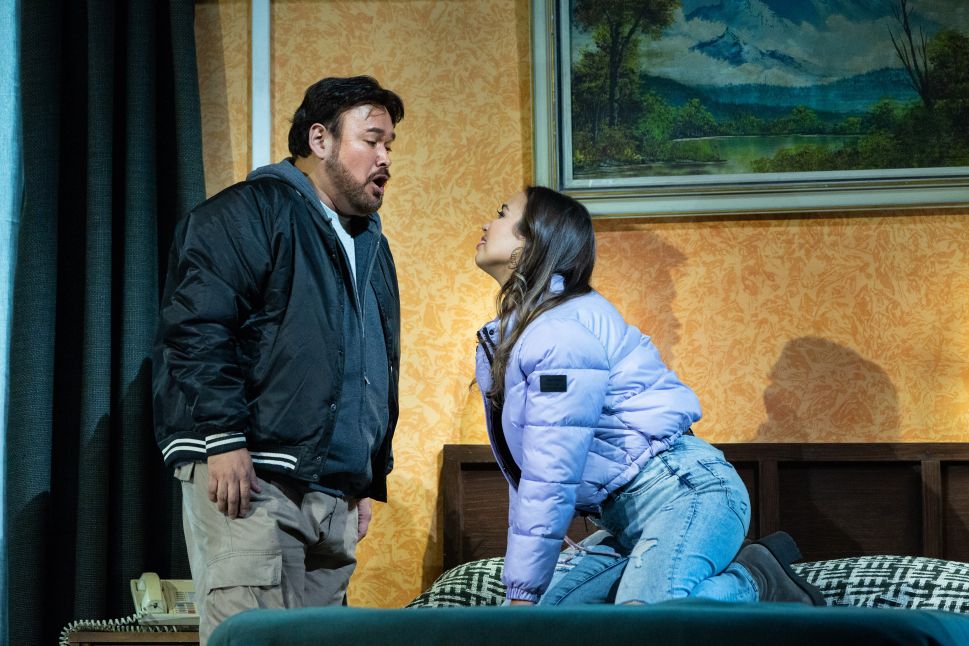