Twenty years ago, Take Me Out, a brave, powerful, poignant play about a gay professional baseball player who comes out of the closet at the top of his career to balance the personal challenges of freedom in life with the maintenance of racial and sexual discrimination in sports, took Broadway by storm and won a ton of awards, including the coveted Tony and a nomination for the Pulitzer Prize. Astoundingly, while everything has changed in real life since then, so little has changed in baseball that it is unquestionably the right time for a second look. The nightly standing ovations at the Helen Hayes Theatre for the excellent new revival of Richard Greenberg’s must-see autopsy on baseball are a testament to the watch cry “Play ball!” as well as the outdated but still socially accepted way to do it. (You can count the number of gay baseball icons who have come out of the closet on the fingers of one hand.)

Set during the 2002 season, Take Me Out is about Darren Lemming (popular Grey’s Anatomy star Jesse Williams in a compelling performance of winning naturalism), a racially mixed star centerfielder for a team called the New York Empires. They were losing before Darren came along, and then their fortunes escalated. Now they are contenders for the pennant and even the World Series. Suddenly, in a galvanizing personal choice to honestly redefine his true self at the top of his game, Darren’s risks everything by becoming openly gay, a decision that costs him friends, fans and purists who worship the all-American institution of baseball as a sacred monument of purity, manly competition, moral superiority, fame and…money. He’s less vilified by his teammates, who have private misgivings about showering with a “faggot” but refrain from joining the chorus of public boos. They just want to win. The blatant exception is new Empires pitcher Shane Mungitt, a stupid, hateful redneck played with a sneer on a face as appealing as limburger by Michael Oberkholtzer. Shane insults and humiliates Darren in the press and gets temporarily suspended, but when his punishment ends, on the day before he’s set to return, Darren announces he’s leaving the fame and retiring from the sport forever. With the backing of an admiring and supportive teammate (Patrick J. Adams, from TV’s Suits) Darren faces the odds and stays on, and the tragedies that result are not always convincing, but Greenberg’s writing never wanes.

The action does not take place on the field, but in David Rockwell’s stark locker room set, where every member of the team is required to strip down and shower full-frontally naked while acting out the play’s most dramatic scenes. The original 2003 production provoked shock, controversy, titillation and even a bit of virtuous outrage because of the liberal use of total nudity. Subsequent directors have been forced to decide which road to take; in the current production, veteran director Scott Ellis goes the full monty. Believe me when I tell you that before it ends, you’ll get to know the entire team intimately. They’re a varied lot: including two who speak no English, a Japanese pitcher who was brought up in an internment camp for foreign born U. S. citizens during World War Two and has a liberal point of view about the unjust prejudice aimed at Darren. The actors are individually and collectively wonderful, especially Jesse Tyler Ferguson (a weekly favorite on TV’s Modern Family), who plays Darren’s gay business manager Mason Marzac as a twitching, hysterical neurotic, fully clothed throughout, without removing so much as a pocket handkerchief. To each character, baseball is a multiple choice metaphor. For every man, the sport is a metaphor for freedom. Even for the homophobic Shane, who was raised in orphanages, the game is a home when he has nowhere else to go. For the foreign born teammates, baseball is an even bigger metaphor for hope in a Democratic society, and they’re all in it together. Finally, when Darren guides the Empires to win the World Series before his final inning, baseball becomes the ultimate metaphor—for survival and moving on.

Scott Ellis’ grounded staging spotlights and underlines the conflicting emotional subtexts in Richard Greenberg’s profound script, in a production of Take Me Out that is an alternately tense, funny, and heartrending toast to America’s favorite pastime. 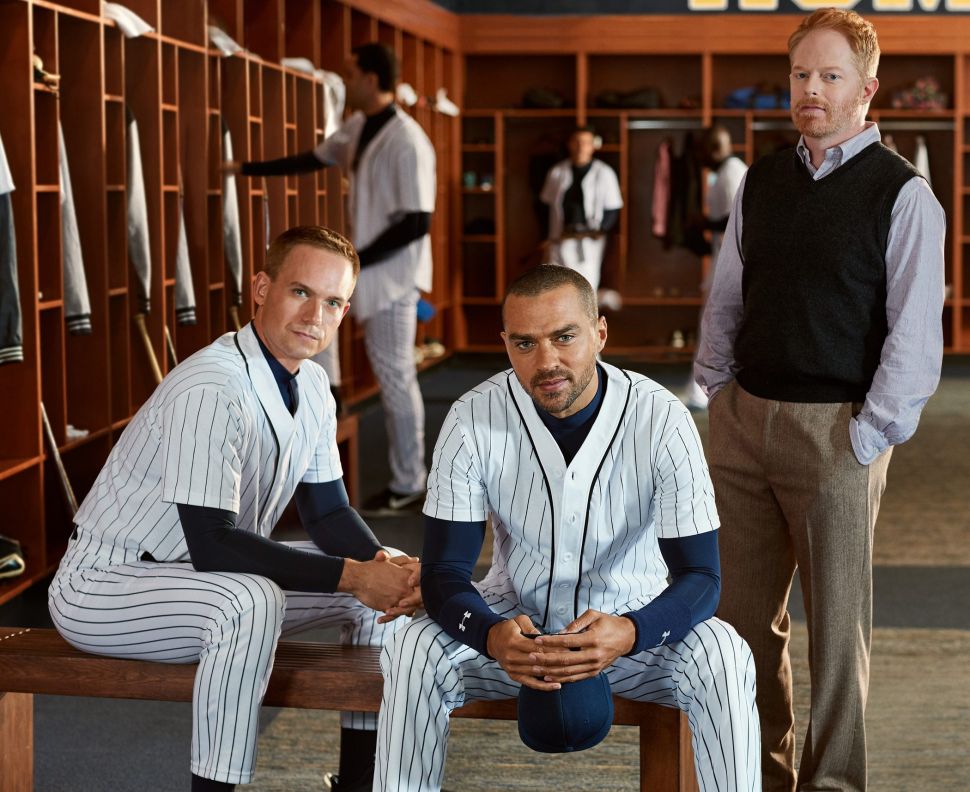 Filed Under: Arts, Theater, Entertainment, Theater, baseball, Take Me Out