Tracy Letts is a Renaissance man in a rock-and-roll world, whose catalog of plays aimed at clarifying the troubles and shocks in the morally disintegrating world we live in usually succeed even if they seem complicated and infuriatingly exasperating in the process.  His latest to open on Broadway is The Minutes, a sharp, caustic, often brilliant, funny and sometimes confusing political satire that runs 90 minutes without an intermission.  You will probably leave at the end with very mixed feelings, but you will talk about it, think about it, and go away with the knowledge that you have never seen anything like it.

The Minutes was world premiered by Chicago’s esteemed Steppenwolf Theatre in 2017, scheduled for a Broadway transfer in 2018, and then derailed by the coronavirus pandemic until now, arriving at last with its original director, Anne D. Shapiro, intact, along with its amazing set designer, David Zinn, and several original cast members. When you enter the converted  dance floor of New York’s infamous old Studio 54, you’re blasted by patriotic marches and awed by the setting: the huge  arched-ceilinged conference room of a small-town city hall replete with tables, desks, and walls of maps, plaques, proclamations and other relics of political detritus on a harsh and noisy stormy night.  The occasion is a city council meeting attended by nine board members in a hamlet called Big Cherry. There is one empty chair belonging to Mr. Carp, whose absence concerns the board’s newest and youngest addition, Mr. Peel (played with a keen conscience and a sense of responsible civic pride by popular Schitt’s Creek star Noah Reid, making his Broadway debut)—a clean-cut, idealistic, fair-minded and liberal-thinking (but naive) dentist who missed the last meeting because he had to attend his mother’s funeral.  The two men had shared similar ideals and become friendly allies, and Mr. Peel wants to know what happened at the crucial meeting he missed, what his friend Mr. Carp did to invite dismissal, and why he has subsequently mysteriously disappeared.  But no one will acknowledge his request for information or respond when he asks for a reading of the minutes from the previous week’s meeting.  When he persists, the crafty mayor becomes indignant, then belligerent.  (Author Tracy Letts takes on this rapidly divisive role and distinguishes himself in the part.)

While the mystery of the unfinished minutes grows, we get to know the diverse flaws and character peculiarities of the nine council members with amusingly ironic names, from the ancient Mr. Oldfield (veteran actor Austin Pendleton) and matronly, long-winded Ms. Innes (Blair Brown) to lecherous, ass-grabbing and aptly named Mr. Breeding (Cliff Chamberlain) and self-serving Mr. Blake (K. Todd Freeman), who wastes everyone’s time trying to talk his fellow council members into sponsoring a money-making scheme called the “Lincoln Smackdown”, a racially-charged caged boxing match between paid townsfolk and a martial arts expert dressed like Abraham Lincoln. The uniformly outstanding cast, many of whom appeared in the original Chicago run, includes the town clerk (Jessie Mueller) responsible for the missing “minutes”, and Mr.  Carp himself (terrific Tracy Letts regular Ian Barford) who at last re-enacts the raucous meeting Mr. Peel missed in a violent flashback.  To say more about either of them would amount to a fatal spoiler.  The present meeting, played in real time, catalogues issues, large and small, that reflect the board’s self-serving incompetence as well as the town’s corruption, including the reveal that a series of the town’s stolen bicycles were illegally sold for greedy profits that went to the sheriff, whose brother is one of the board members, the proposal to spend money on a fountain with handicapped access that will benefit another board member’s sister, and the discovery that the annual civic-minded Heritage Festival celebrating the man who saved the town from the marauding Sioux Indians in 1872 has been a sham for 152 years.  Mr. Peel’s horror when he learns it was the Sioux who were massacred for their land, not the so-called town “heroes” who were in danger, he rebels.  The story of Big Cherry has been a fiction perpetrated through   generations of patriotic Americans by the city council.  The outraged Mr. Peel isn’t buying it.  They tell him if he doesn’t like it, he can get out.  Which is exactly what he does.  But after a corny horror-movie ending I wish the playwright had managed to avoid, underscored by the town’s failing power grid, he comes back for reasons that are open to endless interpretations but are never entirely clear.

Ending in a weird mixture of historic lies and weird antics that wouldn’t make it past a first table reading for an old Twilight Zone episode, The Minutes is an allegory of small-town politics as a mirror image of polarized big-time American power that will not appeal to everyone, but it vows to keep you interested and amused at the same time. At a time in American history when you hear everyone from journalists to housewives say “This is not who we are” and “This is not the Democracy we have always been”, Tracy Letts has written a profound indictment of who we really may be after all.  Maybe violence, greed, dishonor, cruelty, self-aggrandizement, intolerance and treason are the talismans that always defined us—and still do.  Idealism has all but disappeared.  In the age of Trumpism, the battle for political and cultural survival is waged daily. The Minutes is staged on the front lines.  The city council is a metaphor for Congress.  The members are stand-ins for both sides of the aisle—divided into factions of the liberal Left and the radical Right, directed to display a primarily stoic indifference that belies their inner malevolence.  The haunting resolve before the curtain falls on 90 minutes of heated debate is that nothing can be done to change it.  The inevitable result, reflected daily on front pages from sea to sea, is bloodshed.  By the end, The Minutes is filled with so many metaphors you can’t keep them all straight, the play blurs its vision, and Tracy Letts loses his grip on both reality and logic, plunging the audience into a morass of moral confusion—but there’s a lot to think about while you wait for the next reading of the minutes. 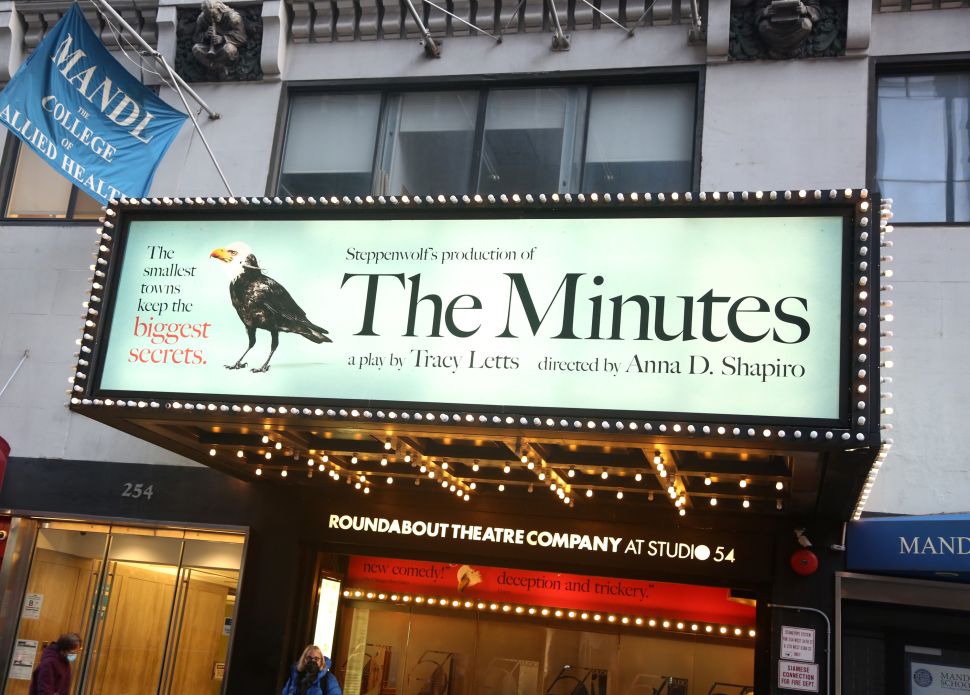