Mixtapes & Roller Skates at LeFrak Center at Lakeside on August 2, 2018 in the Brooklyn borough of New York City. (Photo by Michael Loccisano/Getty Images for HBO)
By Natalia Petrzela • 04/15/22 1:32pm

Starting today in Rockefeller Center, a sleek new 70s-style roller rink opens until October, the first time that roller skating has been permitted there since 1940. It’s a fitting tribute to a roller-skate revival that’s been underway for a few years. What’s behind the return of roller skating in general, and the Rock Center revival in particular? Part of it is the pandemic, Samantha Duane, a former roller derby player and now personal skate coach, told me. Roller skating can happen outside, requires relatively little equipment, and allows human connection even from afar: “the vibe is just so infectious,” Duane gushed, “that it not only brings joy to the skater but the observer: people smile, beep, wave, and yell ‘that’s awesome and so cool!’”

The midtown pop-up is a reboot of Flipper’s Roller Boogie Palace, a roller disco emporium that operated in Los Angeles for three wild years from 1979 until 1981. Its splashy website makes no mention of the pandemic but definitely reflects the political moment, featuring a montage of racially diverse skaters and flashing bright yellow block letters announcing its ethos of inclusivity: “ALL ARE WELCOME!” As Liberty Ross, daughter of Flipper’s co-founder Ian Ross, tells it in her recent coffee table book about the roller rink’s brief, brilliant heyday, it was an egalitarian, technicolor utopia. Celebrities like Jane Fonda, Patrick Swayze, and Prince intermingled with “all the misfits of LA,” she told LA Confidential: “It is because Flipper’s was so diverse that made it so unique and special… It opened people’s eyes to other cultures and opinions, music and fashion. It was the opposite of exclusive: It was a home for everyone.”

Was it though? If the energy at Flipper’s was electric and unconventional, such easy universalism overlooks the fraught racial dynamics that affected the rink, and the much longer past and present of roller culture. In a racy 2016 British GQ interview, the elder Ross (who is white, as is his Flipper’s cofounder, music impresario Denny Cordell) described first hearing about roller skating as something “uptown girls” went downtown to experience at the all-Black Empire Rollerdrome in Brooklyn. He traveled from London to Brooklyn to investigate. Energized by what he saw, he determined that somehow, he would open his own Los Angeles outpost. “The nearest thing we had to a coherent business plan was ‘Play That Funky Music, White Boy’,” he recalled.  On opening week, Cordell described his vision for Flipper’s to the Los Angeles Times: “it won’t be elitist, but it will be exclusive.”

That Brooklyn rink was so homogeneous due to larger patterns of residential segregation, but also because roller rinks, like pools, gyms, and amusement parks had long been policed to prevent “race mixing.” At times, like in the 1940s and 50s, the policy was outright exclusion. Some protests, like the one by the Congress for Racial Equality at Chicago’s White City Roller Rink in 1946, succeeded in desegregation.

More frequently, and well into the 1960s, white rink owners sometimes reluctantly scheduled Black-only “Soul Nights” or “Martin Luther King Nights”. Ross and Cordell forcefully rejected such racial exclusivity at Flipper’s, though the emphasis was more on a come-one, come-all party—as much as that was possible at a private club—than political equality. One patron’s example of such bonhomie was that she would regularly “take home one of the gorgeous black skate instructors.” Ultimately, the persistent complaints of “uptight white people” with the Saturday night funk-and-soul party, which attracted Black patrons from Watts and Compton, contributed to its closure.

Such segregation in recreational spaces understandably attracts less activist and academic attention than exclusion from essential services such schools, housing, or transportation, but getting shut out of fun is also important, and unjust. Whether on Black-only nights, in a small number of Black-owned rinks, or in diverse groups like the Central Park Dance Skating Association that have for decades gathered informally—and affordably—in parks and gyms, spaces borne of exclusion have often come to be defined more by a collective sense of joy than of injury. The 2018 documentary, United Skates, charts how Black roller rinks were important incubators for hip-hop and rap. Finding such community on skates is no bygone phenomenon: Jocelyn Goode, who organized a Queens pop-up skating event in 2020, told the New York Times, “It was the first time I had seen joy all year… and it was Black people being happy.” Inspired, a few months later, she established the African-American Roller Skate Museum to honor this tradition.

Such joy on wheels can come from the thrill of the kind of bacchanal the original Flipper’s offered, where a permanent cloud of pot smoke apparently hung over the rink, but modern enthusiasts are more likely to tout its health benefits than its hedonism. Duane describes roller skating as “a non-competitive athletic endeavor that anybody can do,” and waxes poetic about its effects: “just like a marathon runner gets that runner’s high, a swimmer gets in the flow, skating becomes part of your being. It becomes your breath.” One skater who joins the free weekly gathering in Central Park described the experience of “total mind-body freedom” in a wellness idiom more often associated with boutique fitness.

In addition to injury claims, parking and overcrowding violations, and the fickle nature of LA nightlife, the opening of the upscale Beverly Center nearby shot up property values and absolutely hastened the rink’s demise. Given the closure of New York City rinks due to the same sort of real estate pressures, there’s an irony in Flipper’s returning as the centerpiece of one of the most expensive commercial real estate districts in the world, in partnership with developer Tishman Speyer.

Cecile Klaus, a roller dance choreographer and founder of the Paris-New York City roller dance troupe Miss’ile Team, is excited about the rink’s opening: “It is great for visibility for roller dancing.” But the rink’s small size, high prices, and short shifts mean it will likely remain a tourist attraction, and only a symbolic win for the local roller skating community, long resourceful out of necessity. “We have learned to make our own parties,” Klaus told me, “outside, in empty gyms, or wherever we can find.”

Flipper’s of yore and its revival are sure to share one throughline: kids. Despite serving fine wines and A-list celebrities, the original Flipper’s found its daytime youth sessions were as popular as the star-studded Saturday nights. And like the more famous ice rink it temporarily replaces, today’s reboot is sure to entice children craving an active interlude in crowded midtown. Not to mention their parents, as likely then and now to connect to their inner child through skating. “That’s the thing about roller skating,” Duane, who had never heard of Flipper’s, and first encountered the activity at birthday parties growing up in New Hampshire in the 1980s, told me, “it’s just very childlike and freeing.” I’m taking my actual children and my inner one—as well as my new skates—next week. 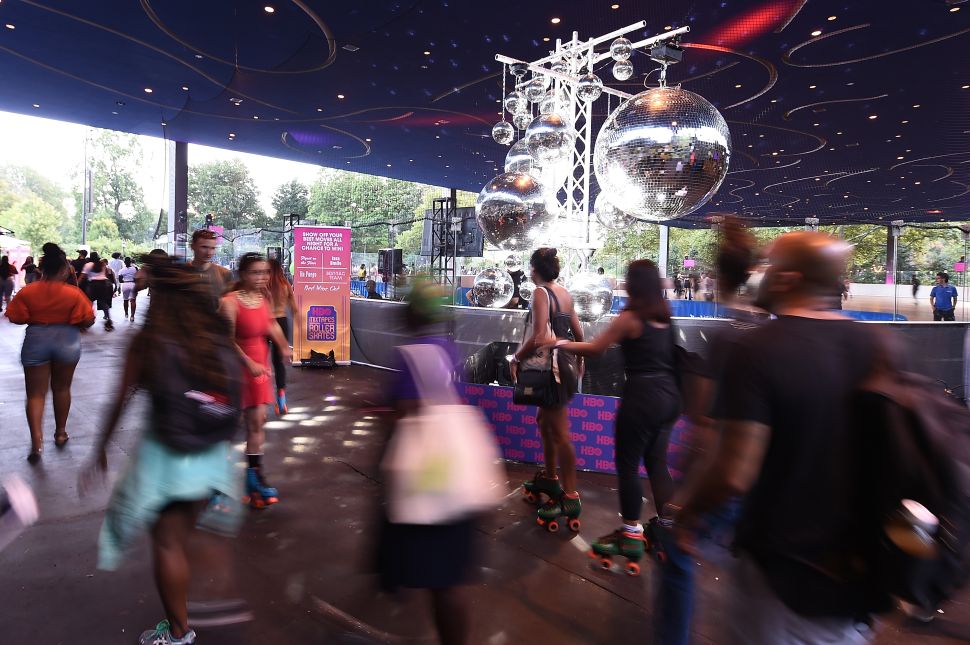