Historically, going to space has always been part of a government-backed effort that require extensive training, funding, and a justifiable mission. A crop of commercial space companies are vowing to change that.

From Space Perspective‘s balloon stroll in the stratosphere to Virgin Galactic’s suborbital thrill ride to Axiom’s weeklong stay on the International Space Station (ISS), private space travel packages offer a myriad of experiences at every altitude. And they’re available to anyone who can afford a price tag ranging from just over $100,000 to $50 million.

Most human spaceflight companies are still a few years away from regularly flying paying customers. But they are already attracting prospective customers and, trailing in the wake of the would-be passengers, luxury travel brokers who believe space tourism is the next big pursuit for the ultra-wealthy.

For the space industry, these travel agents can help them find customers in the narrow slice of the population with both the means and interest to go to space. And for the mega-rich curious about a jaunt into orbit, a space travel agent can handle the messy process of vetting the vendor, negotiating a price and booking tickets.

SpaceVIP, a service launched in early 2021 by Roman Chiporukha, a New York-based consultant who helps the very wealthy plan vacations, has booked three group flights with Space Perspective, a Florida startup offering a slow-speed ride to the stratosphere in a sightseeing capsule lifted by a giant hydrogen-filled balloon.

The entire journey is about six hours, including two hours hovering at peak altitude of about 100,000 feet (19 miles)—which isn’t technically space, but still three times higher than where commercial airplanes fly. Because both the ascent and descent are slow, the trip doesn’t require any training. Within the space tourism community, Space Perspective is thought of as a gentle—and cheaper—alternative to Virgin Galactic’s 90-minute suborbital flight, which requires basic astronaut training. Space Perspective cofounder Jane Poynter said many customers on her company’s reservation list are also future passengers with Virgin Galactic.

SpaceVIP’s website says it can help secure tickets for 11 different space travel programs. The programs that can be completed in one day and require minimal training like those offered by Space Perspective and Virgin Galactic are the most popular among his clients, Chiporukha said, and he expects tickets to sell out quickly once regular flights begin. (Virgin Galactic says it has booked more than 700 reservations. Space Perspective said it has more than 600 people on its reservation list.) Chiporukha was one of the early birds.

Space Perspective expects to launch its first paying customer sometime in 2024. Chiporukha said SpaceVIP hasn’t found enough passengers to fill up the three flights (24 seats) it has booked, but he wants to “ensure full inventory” for future clients, especially those wanting to fly in groups. “They may want to fly with seven friends before a particular date but there are only two available,” Chiporukha said.

Space Perspective charges $125,000 per person, and Virgin Galactic charges $450,000 (recently raised from $250,000). Although no trivial amounts, both price points have huge addressable markets: it’s estimated more than 2.4 million people in the world can afford them. “There is a real appetite for these experiences,” Chiporukha said.

On the seller’s side of the business, especially the high end of the price spectrum, some space companies rely on intermediaries to help find customers.

Rey Flemings, a consultant who manages estates and lifestyle needs for the ultra-rich, is helping Axiom Space, a Houston-based startup proposing to build a commercial space station, look for passengers willing to spend $60 million to vacation on the International Space Station. So far, he is coordinating a trip for one prospective astronaut. “There aren’t that many people out there who have $60 million,” Flemings said, laughing.

In November 2020, before officially launching SpaceVIP, Chiporukha helped find a passenger for a 10-day trip to the ISS using a SpaceX Crew Dragon launch system organized by Space Adventures, a Washington, D.C.-based space tourism company. The mission was cancelled in October 2021 due to the expiration of Space Adventures’ contract with SpaceX.

Recently, Virgin Galactic opened up ticket booking to the public. Space Perspective is marketing its service in a similar way. But even with tickets available online, there’s still a niche for brokers.

The primary reasons are the sheer amount of money involved and the nascent nature of space tourism. Most of the firms providing civilian spaceflight have little track record, and their business relies on a relatively small group of clients committing hefty amounts of money to future service.

Flemings’ firm, Myria, vets both sellers and buyers before booking a trip. Everyone must undergo identity verification, net worth verification, availability of funds, and anti-money laundering checks. Throughout the coordination process, buyers and sellers are asked to continuously rate one another for “kindness,” or how easy they are to work with.

“Everyone is fully vetted, substantially reducing the risk of fraud and encouraging everyone’s best behavior,” Flemings said. “Sellers can rest assured that every buyer is fully qualified, interested, and capable of completing the transaction.”

Another job of travel agents is to find the ideal combination of activities for every budget. Because most suborbital and higher-altitude programs are not available yet, these brokers help clients find Earth-bound alternatives, such as centrifuge simulation training and living in artificial “biomes” that mimic the environment of extraterrestrial planets.

For a beginner’s budget of $100,000, for instance, SpaceVIP’s Chiporukha would recommend starting with a zero-gravity flight and then a centrifuge simulation training program (both cost less than $10,000). Some of these programs are also prerequisites for suborbital and orbital flights. If there’s enough money left, he would recommend reserving a seat with Space Perspective.

Many aspiring space tourists say what excites them the most about going to space is the so-called “overview effect,” a mind-shifting experience reported by some astronauts after they’ve seen first hand the reality of Earth from outer space and realized how fragile and tiny our planet is in the grand scale of the universe.

“Like so many astronauts have said, that changed their perspective,” said Sharon Hagle, a Virgin Galactic customer who reserved two tickets for herself and her husband, Marc Hagle, back in 2007. The couple were also customers of Jeff Bezos’ Blue Origin. They flew to space with three other passengers on Blue Origin’s fourth human spaceflight on March 31.

Views of a borderless Earth from space #NS20 pic.twitter.com/0FIHvvMs69

For the ultra-wealthy, it’s probably not too difficult to justify the price tag for a brief ride to space. This community routinely spend over $1 million on vacations anyway, said Flemings. Still, many of them feel the need to assign some sort of a higher purpose to their trips to space, especially considering that civilian spaceflight for now is often a highly publicized event and not as discreet as a party on a superyacht.

“When you get to the point of being able to afford a $1 million experience, the price become less important than what you are trying to accomplish and how other people feel about it,” Flemings said.

Flemings believes the early-stage space tourism industry could open a door to what he calls “experiential philanthropy,” where wealthy clients contribute some of their vacation funds to more meaningful projects like scientific research. “There are countless research projects in space that could use additional funding,” he said.

“When I come back, I want to share the experience with elementary school kids and inspire the next generation. That’s what SpaceKids Global is all about,” she said ahead of her Blue Origin flight. She has five grandchildren ages 5 to 18. 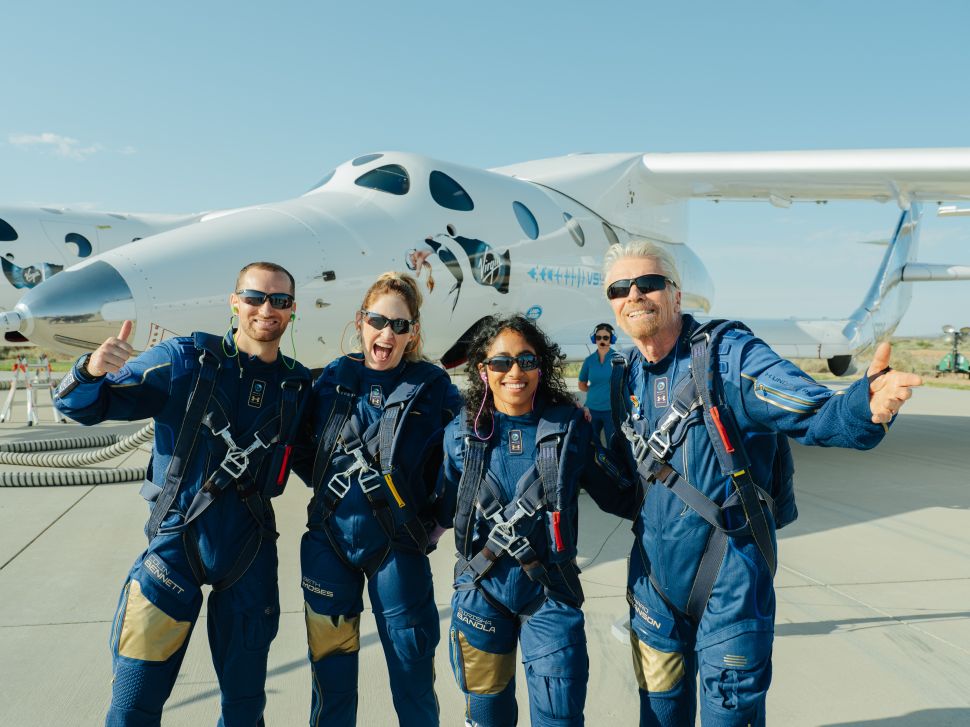