This season of Star Trek: Picard has shown its ensemble cast a lot of love, giving each series regular some time in the spotlight. This week, however, we spend some quality time with the title character, digging deep into a defining moment of childhood trauma with the help of a fantastic guest star.

Most of Picard’s story in “Monsters” takes place within his mind, in a pair of parallel coma dreams. In one, Picard is being taunted by a Starfleet analyst as part of a mandatory psych evaluation. The analyst, portrayed by James Callis of Battlestar Galactica fame, has a biting wit and no patience for Picard’s emotional obfuscation. In an effort to pierce Picard’s emotional defenses, the analyst challenges Picard to improvise a simple children’s story, and Picard begins spinning a yarn about a benevolent queen and her young son being threatened by a monster who resides in their home. The other dream is the story he’s spinning itself, in which the characters are represented by a young Jean-Luc (Dylan Von Halle) and his mother (Madeline Wise). (While not named at any point this season, TNG establishes her first name as Yvette.) The fairy tale unfolds in fits and starts as the analyst prods Picard to finish it, but it’s also interrupted by the arrival of Tallinn, who has psychically projected herself into Picard’s mind in an effort to wake him from his catatonic state.

The scenes between Picard and the analyst are among the best of the series so far, such that I almost wish that this episode (or at least, this subplot) had been a two-man play. Patrick Stewart and James Callis play off of each other beautifully. Callis’ character picks apart Picard such that he cannot sustain his practiced calm, and finds himself shaken and struggling for words. We’re seeing flashes of the fragile child who he used to be, not just in the fairy tale world, but in Stewart’s performance. The analyst, being born of Picard’s own psyche, knows his weaknesses and cuts through his repression, but his real edge is the form Picard’s subconscious has given him: that of his late father. (His name also goes unmentioned here, but it is Maurice.) Picard doesn’t recognize him until late in their confrontation, and I believe that this isn’t only a convenience of dream logic. Until the end of this story, Jean-Luc Picard hasn’t really seen either of his parents as human beings.

In the fairy-tale dream, Picard and Yvette are pursued through the catacombs of the family chateau by ghoulish creatures. Young Jean-Luc is left alone as his mother is dragged away by some unseen force, and he refuses to move out of fear that she won’t be able to find him again. When Tallinn arrives, she helps him face the darkness, which seems to stir up some courage in the older Picard in the parallel therapy dream. Eventually, the dreams combine, and Picard and Dream-Maurice unlock the true story that he’s been repressing for decades. While Jean-Luc’s memories of his parents’ fraught marriage are real, they have been absent some essential context: Yvette suffered from a mental illness which, though not named, is described very much like bipolar disorder. One day, Yvette rushed off in a panic to the dangerous catacombs beneath Chateau Picard, with a twelve-year-old Jean-Luc in tow. When Jean-Luc’s foot became caught in a broken floorboard, Yvette left him behind. Maurice found him three hours later, then confronted an unstable Yvette, which Jean-Luc has long remembered as an aggressive act rather than a protective one.

I’m pleased that the implication from this season’s premiere that Maurice was an abusive husband turned out to be more than it seemed. That Picard was actually the child of an unwell mother is no less cliché, but it does at least create some complicated new feelings for Picard who, having venerated one parent and vilified the other all his life, now has to see them both as real people. His mother loved him dearly, but her unwillingness to accept treatment for her mental illness is as responsible for his scarred childhood as was his father’s course, stubborn heart. The story doesn’t totally exonerate Maurice, either, as coping with an unstable spouse doesn’t excuse his cruel and dismissive attitude towards Jean-Luc and his Starfleet dreams. All it means is that Jean-Luc no longer needs to blame himself for failing to protect his mother from his father. It’s a relief to learn that Maurice isn’t a monster, he’s just kind of an asshole. For Jean-Luc, who has feared becoming his father his whole life, that could make a big difference to how he sees himself and the risks of becoming someone’s partner.

Meanwhile, the romance subplot between Chris Rios (Santiago Cabrera) and Dr. Teresa Ramirez (Sol Rodriguez) marches forward thanks to some refreshing, if potentially timeline-shattering honesty. Hoping to make up for his prior deception, Rios offers full transparency and even beams Teresa and her son Ricardo aboard La Sirena as a gesture of trust, though probably as much as a demonstration of how cool he is. This storyline continues to charm thanks to the chemistry between Rodriguez and Cabrera, but gets cringey just about any time Ricardo is involved. This is not a specific knock against the young actor who plays him; almost no story about grown-ups is improved by the presence of an excitable child, especially when we’re clearly meant to see him as just the cutest thing. We also see a bit of Seven and Raffi’s investigation into the missing Agnes Jurati, though only enough to catch them up with the audience. Love is definitely in the air, as their scenes together represent the only time all season that we’ve seen the couple acting at ease with each other.

Waking from his coma, Jean-Luc tries to make sense of why Q would set him on this path to begin with. He extrapolates that, since Q clearly wants him to know himself better, that perhaps he should be trying to know Q better. Usually, when Q comes around, Picard is preoccupied with trying to make him go away; he’s never really tried to learn what makes him tick. Now, he may have to reach out to him in order to put an end to the threat to the timeline. I’m generally of the opinion that Q is better off being mysterious and unpredictable, and that Q’s fascination with Picard or humanity has never required explanation. I have my doubts that any backstory for Q could be satisfying after 35 years of mystery, but given that this is likely John de Lancie’s final run with the character I’m game for a more intimate story as his swan song.

We’ll have to wait a bit for that, however, as Picard and Guinan’s (Ito Aghayere) attempt to summon Q using an ancient El Aurian wine decanter inexplicably fails. (Guinan’s call receiving no response is pretty ominous. It seems pretty clear that Q is on death’s door, but might the entire Continuum be ailing? Star Trek: Discovery sets the Federation’s last known contact with the Q somewhere in the 26th century, and this could be the beginning of their demise.) Instead, Guinan’s bar receives a visit from the FBI, who place her and Picard under arrest under suspicion of being space aliens. While I enjoy the dramatic entrance of the lead agent (Jay Karnes), who seems at first as if he might be another Q who’s come to mess with them, this is a plot complication I am not terribly excited about. Didn’t we just rescue a crew member from government custody two weeks ago? As has become standard for Picard, the stinger setting up the next chapter keeps this one from really sticking the landing, but otherwise, this one’s a winner. 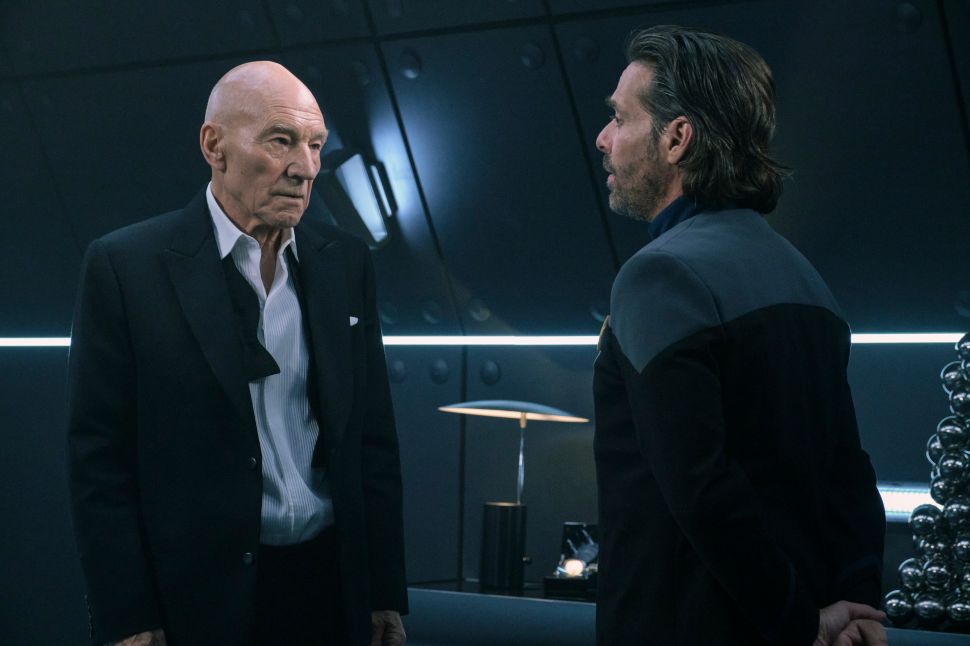