I’m not fond of the term “filler.” Critics sometimes use it to describe any scene, subplot, or chapter in a larger narrative that doesn’t push the plot forward, as if these moments only exist to help a movie or episode reach a certain runtime. I’ve seen last week’s episode of Picard described as filler, and I disagree; its investigation of Jean-Luc’s repressed childhood trauma is valuable to the emotional background of the story, and if you’re not interested in exploring Jean-Luc Picard more deeply then I’m not sure why you’re watching this show in the first place. For this week’s episode, however, I’m trotting out the “F” word. “Mercy” brings multiple running storylines to a rolling stop at a single intersection, and adds one more subplot on top that goes nowhere and does nothing.

“Mercy” finds Picard and Guinan (Ito Aghayere) in FBI custody being interrogated by Agent Wells, a less sexy Fox Mulder played by Jay Karnes. Wells has spent his career searching for proof of extraterrestrial life ever since he stumbled across a spooky Vulcan survey party as a young boy. Now he believes, correctly, that his quest has finally borne fruit. Wells knows that Picard’s presence has something to do with the Europa Mission and threatens to scrub the launch, which in turn endangers the future, so Picard and Guinan must either assuage his suspicions or gain his trust in order to preserve the timeline and affect their release. Ultimately, they decide to tell him the truth, offering him answers about what happened to him as a child and a role to play in saving the future. There’s not much more to say about it —when Picard meets up with Raffi later, she asks, “Where have you been? Y’know what, never mind.” And that basically sums it up.

The problem isn’t that “Mercy” places a new obstacle in our heroes’ paths only to swiftly resolve it in the space of one episode. That’s honestly something I’d like to have seen more of this season. (In the old days, they called this “television.”) It’s that the conflict with Wells provides very little that we didn’t get a better version of in the previous episode. In “Monsters,” Picard is interrogated by a psychic manifestation of his father, who forces him to revisit and recontextualize a traumatic memory from his childhood that he had distorted into a dark fantasy. In “Mercy,” Picard is interrogated by an FBI agent who has his own distorted memory of a childhood trauma, and Picard has to help him see the full truth of it. Picard is applying the lesson he learned from his recent experience, but he’s passing that education on to a character we just met whose traumatic memory is—from the perspective of a Star Trek fan—totally mundane. That all of this drama takes place seated in a bland little cell only adds to the feeling that this is a deescalation of what we saw last week.

While Picard is alone with Wells, Guinan is pulled aside to chat with another FBI Agent, which turns out to be Q’s delayed response to her “summoning” ritual. Guinan puts two and two together and, when challenged, Q admits that he’s at death’s door and that whatever he’s up to is an attempt at giving some meaning to his life. There’s not a lot of new information here, but there’s one line of dialogue that may hint at what this has all been about. “Can a single act redeem a lifetime?” asks Q, with a sad quiver in his voice. Q has committed countless acts of selfish cruelty in his day, but there’s only one that relates directly to the story we’ve been watching: pitting the Federation against the Borg. Has Q contrived this entire adventure in order to put an end to that conflict, and to allow Jean-Luc to play a key role in making the peace? If he has, it might be the most drawn-out apology in the history of time.

Beyond the speed bump of the FBI plot, “Mercy” also splits its time with three other storylines, each of which only gets a few scenes. This is Raffi and Seven’s second episode of following the trail of the Borgified Agnes Jurati, and while it does provide some exposition on the villain’s current M.O. and an opportunity for some half-assed character development, the way it’s spread out across the episode makes it feel thinner than it is. Seven (Jeri Ryna) and Raffi (Michelle Hurd) engage in a fistfight with the Queen that ends at about the 16 minute mark, and they pull themselves off the pavement a full 15 minutes later, after three other plots have rotated through. The chopped up narrative also makes it easy to lose the emotional through-lines in each subplot. For example, this week Raffi faces up to passive-aggressively bullying Elnor into remaining at Starfleet Academy for her benefit, leading to his death. However, this doesn’t really land because it seems to come out of nowhere, with any other indications of Raffi’s manipulative behavior happening weeks ago, or worse, off screen during the Raffi/Seven romance that occurred between seasons.

More satisfying is this week’s morsel of Rios/Ramirez romance. While little Ricardo is still too cutesy for his own good, Chris and Teresa continue to navigate the unusual circumstances of their relationship in a manner that’s exactly cute enough. Its built-in expiration date gives it a youthful sweetness, but they’re also grown-ups who have been around the block a few times, and that’s all there in both of their performances. Moreover, this is the one subplot that feels as if it should be advancing at a relaxed pace, since it’s mostly isolated from the season’s sci-fi jeopardy. The plot is about to converge on La Sirena, where the family Ramirez is playing house, so one assumes that this subplot’s peaceful tone is about to be interrupted in violent fashion, but the oasis has been nice while it lasted.

Finally, there’s the story with the wicked Dr. Adam Soong (Brent Spiner) and his genetically engineered daughter Kore (Isa Briones). Kore finally accepts that she was made in a test tube, confronts her father about his lies, and walks out into the sunlight, apparently cured of her genetic defects thanks to a gift from Q. Briones has had to do a lot with very little this season and she gives a compelling performance this week. When Kore faces her father, she already suspects that she’ll be leaving him behind, and there’s a sense that she’s anticipating how painful and scary that will be. But, once she’s made up her mind, it’s like she’s ripped off a Band-Aid, and she can confidently move on with her life. (To do what, exactly? Where’s she going? She’s never been outside the house before. Does she have Internet friends she can stay with? Does she have cash on her? Are there even any records of her existence, and if not, how’s she going to get a job or an apartment? We are not meant to ask these questions. “Good for her,” we say, and move on.)

The episode ends with our many threads finally meeting, as the Borg Queen enlists Dr. Soong to help her defeat Picard, steal La Sirena, and start conquering the galaxy with a new hive of drones. (She probably leaves that last part out of her pitch.) In exchange. Soong uses his military connections to secure the Queen a private military strike force, who she promptly assimilates. In exchange, the Queen promises to help Soong sabotage the Europa Mission, guaranteeing his place as a historical icon to the evil Earth Confederation of the future. Their alliance comes together very quickly, but I’m not going to look that gift horse in the mouth. At last, it seems as if we’re entering Act Three, which should put an end to anything resembling filler for the rest of the season. 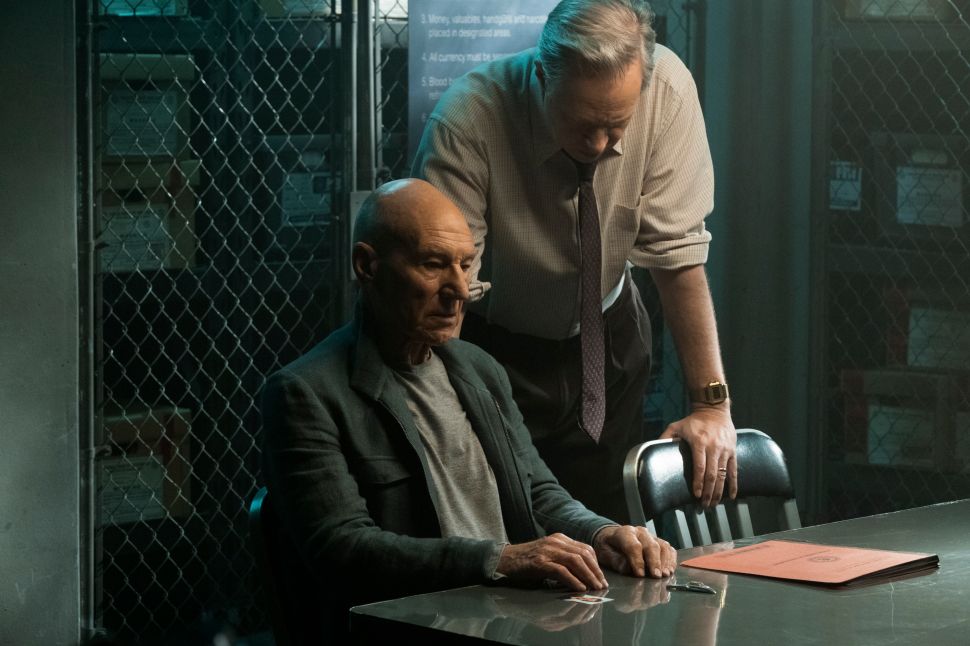