In 2020, the  global GDP amounted to about 84.97 trillion U.S. dollars. Citibank analysts recently projected that the Web3 economy will reach $13 trillion by 2030. It’s the beginning of an entirely new economy. While the concept of the metaverse (Web3) has been around for a while, the metaverse economy has recently attracted some of the biggest brands, including banks, entertainment companies, global fashion brands, and even governments.

“This year will be the peak hype cycle,” says 8th Wall’s VP of Product, Tom Emrich, in his  “Trends to Watch for in 2022″” (Emrich’s company was recently purchased by AR giant, Niantic.) “Right now the metaverse is more mirage than miracle,” he says. “The more we get into this, the more we’re going to realize that there’s a lot of work that still needs to be done.”

But the billion dollar idea is for the metaverse to be one gigantic immersive and interoperable experience where you do everything you might do in a real world, just virtually. At the moment nascent metaverses are more like nation-states than a universe. Decentraland is based on its own currency called MANA. SAND is the native cryptocurrency of the Sandbox. Roblox uses Robux; Fortnite uses VBux. You get the idea. Others like Superworld and Axie Infinity rely on cryptocurrencies, typically Ethereum, to make purchases.

The ideal, arguably, is to have a metaverse version of a euro that is interchangeable across lands. If I buy an outfit for my avatar in Decentraland I’d love to wear it in The Sandbox. Presumably, this is what Facebook had in mind with its abandoned Libra/Diem currency, although this month the Financial Times reported that “Zuck bucks” are still being planned.

“These tokenized networks are attracting capital, talent and technology giving them a nation–state (with their economic structure and in-network currencies) status but also are market places and laboratories of co-creation between various projects,” says Nitin Gaur, who just left his role at IBM to head to pursue metaverse projects.

Activities range from huge concerts featuring avatars of meta artists like Travis Scott and Ariana Grande. Branded stores for avatar clothing from Gucci, Nike, Ralph Lauren and Vans. Games from NASCAR and Forever 21, all focusing on meeting a young demographic where they’re at. Tami Bauhumik of Roblox, a metaverse with 50 million (mostly young) users per day says, “Roblox is focused on aging with its users.” Roblox, The Recording Academy and MasterCard hosted a version of the Grammy Awards where viewers could interact with avatars of featured musicians  and buy merchandise. A gala Metaverse Fashion Week held in the Decentaland showcased major brands like Dolce Gabbana, Estee Lauder, Tommy Hilfinger and Selfridges offering a mixture of catwalk shows, NFTs redeemable in the real world, and sales of digital couture.

Some, like Facebook’s Meta, require special VR or AR headgear. Decentraland already has an immersive shopping center a la LA’s Rodeo Drive. Most of these require entry as an avatar, a digital representation of yourself.  Sometimes that means you’ll appear as a cartoon-like floating torso; other times you can dress as anything from a unicorn to a punk rocker. Tricking out your avatars with bling accessories or digital weapons has become a serious business with $80 billion dollars a year in virtual goods being sold.

The Metaverse on Blockchain

A true metaverse will keep a record of everything that’s bought, sold, and traded on a blockchain ledger. Your purchases—even if they’re only a bunch of digital pixels—reveal an immutable proof of ownership. And that’s where things get complicated.

To own something in the metaverse you need a digital wallet. And the wallet can’t be filled with cash or credit cards, since transactions need to be recorded on the blockchain. This requires opening a crypto account (Ethereum is the de facto standard but there are plenty of new wannabes—such as Solana  and Terra—as the currency for the metaverse). And because the crypto needs to get put into your wallet you’ll need to go to exchanges like Binance or Coinbase where you can exchange your fiat currency (US dollars in my case) for an equivalent amount of cryptocurrency.

Every stop along the path to setting yourself up for commerce on the metaverse is “hitting roadblock after roadblock,” reports Katie Canales in her painfully epic diary of becoming the owner of a 14-second animated cartoon of a pig. “And now I have no clue what to do with it,” she adds. Processing fees (called gas fees), third party sites to connect accounts, long strings of public and private crypto keys—these are just a few of the migraine-inducing obstacles you’ll come up against as a metaverse tycoon.

Enter NFTs: The Ticket to the Metaverse

If the metaverse is an immersive destination and crypto currency is what you’ll spend while you’re there, one of the most important assets in this new world are NFTs. NFTs are basically tokenized digital representations of everything from artwork, to fashion, to event tickets, games. They can even be used as tickets, redeemable for experiences in both the physical and virtual world.  Once purchased they are part of your digital portfolio.

Depending on how an NFT is coded, once you own it you can unlock member-only experiences, buy and trade or just show it off. Some of the value of collections like  Bored Apes or  CrypoKitties are thanks to scarcity—just a few NFTs were minted (or created) for sale. Today, there are no universal standards and no rules except for what’s written into the code. NFT ownership laws will be tested as some owners of Bored Apes, for example, are launching restaurants in their apes’ image, while others are planning animated series.

Money is flowing as NFT drops (releases) are carefully orchestrated with PR fanfare. Dapper Labs , best known as the creators of the NFT NBA Top Shot—virtual trading cards featuring basketball video highlights—generated $100 million in revenue last year. According to DappRadar, an analytics platform, the trading volume for  NFTs in Q3 of 2021 reached $10.67 billion, an increase of more than 700% from the previous quarter.

Translated to “normie” speak, we’re beginning to spend real money on digital goods like lipsticks, land, or swords and shields to head into the metaverse. The venerable if shrunken 100-year-old TIME Magazine published its weekly issue as an NFT on the blockchain. Its NFT collection, called Slices of Time, allows ownership of specially generated images. To date, according to its website, TIME’s Web3 initiatives have generated more than $10 million in revenue and helped them create a community of over 25,000 artists, collectors, and NFT enthusiasts.

Perfect Corp, an augmented beauty app provider, launched its NFT collection at SXSW. Buying its green version of myself of OpenSea would set me back over $1,000. Wayne Liu, the company’s Chief Growth Officer is effervescent. “For brands, this will open up a new revenue stream and space to drive brand affinity. As in the physical world, consumers in the metaverse will be willing to pay for brands that align with their values and personal sense of style.”

Depending on who you ask, it’s full steam ahead on the NFT train or you’ve missed it entirely. Only one year ago, with the gavel heard round the world, Christie’s Auction house sold an NFT, created by the relatively unknown Mike Winkelmann, aka Beeple, for $69.3 million. That instantly made him the third most valuable living artist at auction after Jeff Koons and David Hockney.

But, just like in the real world, greed, speculation and messy (or non-existent) regulation are creating daily havoc. That cover of Time Magazine, NFT edition? It features Vitalik Buterian, the 28 year old Russian/Canadian programming whiz who created Ethereum. He issues a dire warning about NFTs and the metaverse. There’s a “dystopian potential of digital assets if implemented incorrectly,” he says. Among his biggest worries: overzealous investors, high transaction fees and public displays of wealth by those claiming fortunes trading crypto and non fungible tokens (NFTs).” Recently sales of NFTs have slumped a bit, both in the volume of NFT trading and in the high prices that NFTs would once command.

“We’re all chasing the shiny,” futurist Amy Webb said in her SXSW trend talk as metaverse made her list of trends to watch for the first time. Naysayers like, Ben McKenzie, (best known as the actor on OC), are whooping up anti-crypto sentiment calling them “specious investment vehicles like penny stocks and micro-cap stocks.”  “Bubbles don’t slowly deflate,” he said in a SXSW Live Studio interview. “They burst.”  Scams, artificially pumped up valuations, class-action suits, and illegitimate actors make the Wild West seem like kindergarten in comparison.

Even the Metaverse Will Be Taxed

It’s early days for the metaverse. Predicting winners and losers is media fodder. Smart companies are already experimenting with marketing and sales in the metaverse. Adobe is creating a suite of tools to help organizations become  “metaverse ready”  including tools for creating 3D and immersive content. Chip makers like NVIDIA are creating new generations of graphically intensive, AI capable chips. Mastercard and Coinbase have already cooked up a partnership to create an NFT-based credit card to make onboarding to the new world less painful. And with President Biden’s newfound interest in a US digital currency you can bet the wild west of the metaverse will be on the express track towards maturity.

“NFT’s and the metaverse are among the fastest growing segments of the blockchain ecosystem “ says Dan Spuller, Director of Industry Affairs for the Washington-based Blockchain Association. “Just like in the physical world, there will be a robust economy within the metaverse, which will include mediums of economic exchange. Payments for services, debts, and most likely even taxes. These developments will be part of a greater digital transformation that will take place across our society.” 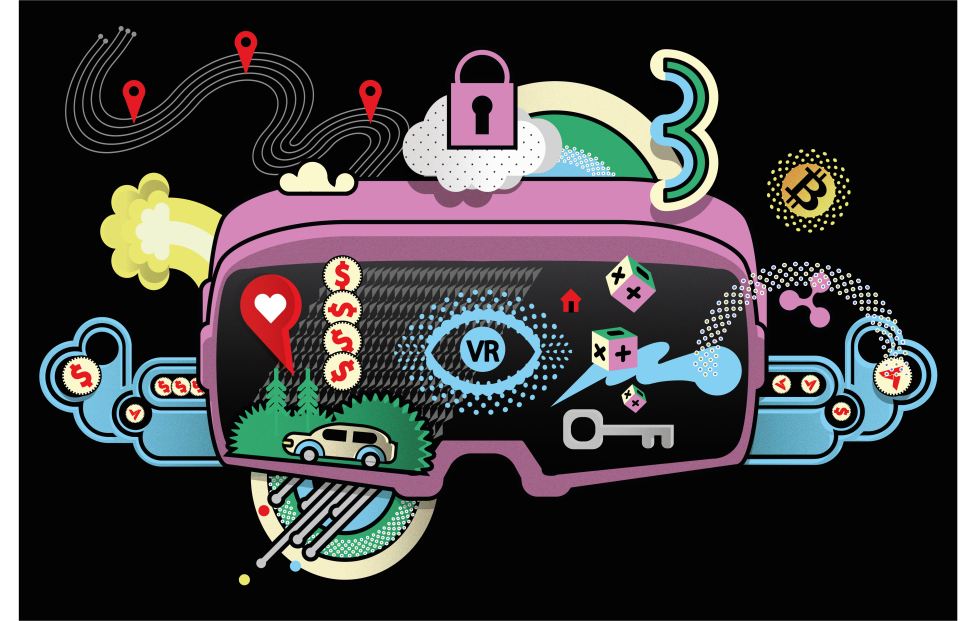