There are two types of people: Die-hard Nicolas Cage fans and moviegoers who are generally indifferent to the actor. In the die-hard category is filmmaker Tom Gormican, who co-wrote and directed The Unbearable Weight of Massive Talent, a comedy where Cage plays a heightened version of himself. Not only is the film a tongue-in-cheek, cleverly meta tribute to one of Hollywood’s most mercurial actors, it’s also a light-hearted delight that reminds us how fun movies can be.

Embodying an alter ego of himself named Nick Cage, Cage is in on the joke, gamely poking fun at his career and past antics in the public spotlight. It’s certainly not his first experience with a self-referential storyline—2002’s Adaptation, a clear influence here, saw Cage playing real-life screenwriter Charlie Kaufman and his fictional twin—but it does blatantly make Cage and his career the focal point. It’s a gimmick that largely works, especially when Gormican urges the actor to go big.

As the film opens, we meet Nick living in the Sunset Tower in LA. He’s in the midst of a divorce from his wife Olivia (Sharon Horgan) and he’s struggling to connect with his teenage daughter Addy (Lily Sheen). He keeps trying to force his interests, namely 1920 silent film The Cabinet of Dr. Caligari, on her, with little regard for who his daughter might actually be. His career is sinking—a meeting with real-life director David Gordon Green at Chateau Marmont goes laugh-out-loud amiss—and he’s in a lot of debt. His agent, played obnoxiously by Neil Patrick Harris, suggests the actor take a job attending a billionaire super fan’s birthday party for $1 million.

It sounds like an easy fix and then Nick will retire, but when he arrives in Mallorca and meets Javi Gutierrez (an absolutely delightful Pedro Pascal), he finds himself getting sucked in to Javi’s love of Nick Cage movies. Unfortunately, Javi may be part of an international crime group who has kidnapped a politician’s daughter. Two CIA agents tasked with taking down Javi’s criminal empire, played with surprising seriousness by Tiffany Haddish and Ike Barinholtz, spot Nick on his arrival and force him to infiltrate the secret areas of Javi’s compound. Nick becomes torn between saving the life of a teenage girl or being best friends with Javi, a fellow cinephile who also regards The Cabinet of Dr. Caligari as one of the best films ever made.

The movie is equal parts comedy and action thriller, drawing inspiration from a vast catalogue of Nicolas Cage films, from Con Air to Gone in 60 Seconds to Face/Off to Raising Arizona to National Treasure. Gormican and his co-writer, Kevin Etten, are clear fans of these movies and they evoke some of the best moments of Cage’s career while still allowing their own story to move forward. The most compelling scenes are between Nick and Javi, who develop an enviable bromance that involves Javi introducing Nick to Paddington 2, his third-favorite movie of all time. To distract Javi as he attempt to locate the kidnapped teen, Nick suggests the pair write a movie, much to Javi’s evident delight. When the duo take drugs and find themselves paranoid in a seaside town, the result is one of the most hilarious scenes shown onscreen this year.

As the film goes on, becoming more and more meta, Cage embraces Hollywood clichés and the expectations that surround him as an actor. The audience is encouraged to marvel at the impressive scope of Cage’s career alongside Javi. The sheer volume and range of his roles is worthy of celebration, as The Unbearable Weight of Massive Talent affirms. While those who are not as enamored with Cage may find less joy in all the Easter eggs, the movie has enough of its own ideas to keep anyone entertained (Pascal’s show-stealing performance is reason alone to buy a ticket). But for fans who come armed with their favorite Nicolas Cage film (The Rock, obviously), The Unbearable Weight of Massive Talent offers a free-wheeling ride through the best of the actor’s filmography. 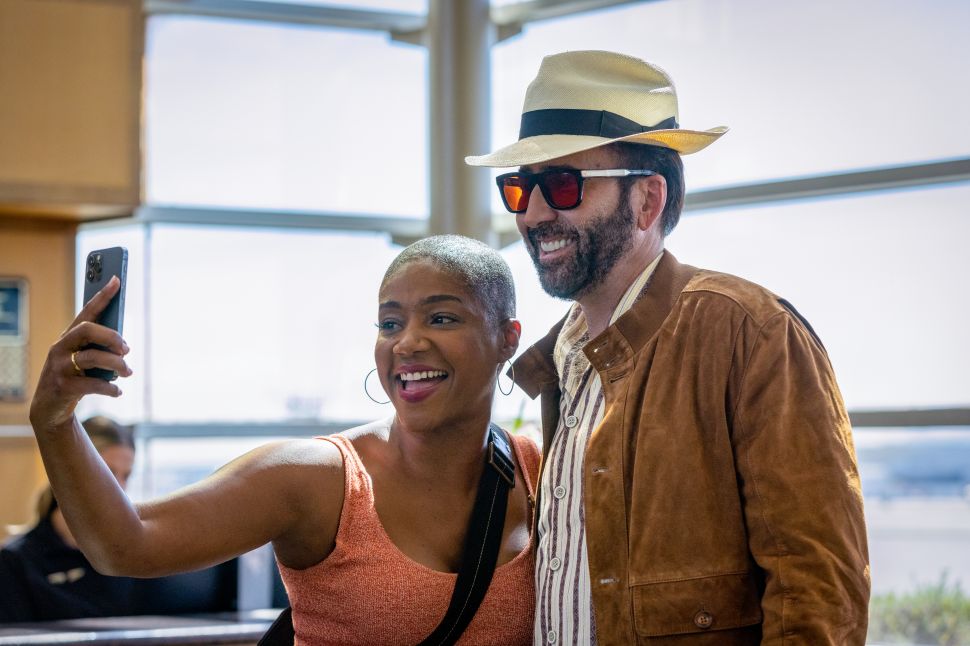