Can truth be anything other than sinuous? These three Arab artists draw from traditions of the Maghreb, and more recent turbulent history in Lebanon, to demonstrate that one can aspire to freedom and individuation through imagination, refracted representations, and the reinvention of iconographies—sometimes radically, such as in Hend Samir’s paintings; sometimes more gracefully and laboriously, with Lalla Essaydi’s chorus of women; and at times, in the delight of effervescent irreverence in Walid Raad’s symbolic mirror.

Flickering by the Lotus Pond (2020-2022) elaborately shatters an artificial intimate-public divide. In this painting, we see boys and girls playing while others gaze towards a woman receiving oral sex. They follow a free lesson in how to please a woman and this isn’t anodyne. Samir, who now lives in the Netherlands, is from Egypt, a country where 92 percent of married women between the ages of 15 and 49 have undergone atrocious acts of Female Genital Mutilation (FGM). Samir’s bold step to include and celebrate these elements lends a voice to denounce repressed sexuality, urgently call for emancipation via the body, and embrace life’s sensuality.

At the forefront of the painting, the couple has sex, and children are beating drums. At the back, we see a lonesome woman pumping , performing domestic chores. This contrast suggests a dichotomy between what is and what could have been, but also the self-erasure that goes with conforming to patriarchal expectations.

Figures, predominantly youthful, inhabit her paintings; their silhouettes often blur and disappear in the background, such as in The Abrupt Plunge (2022) and A Disruptive Impulse (2022). It feels at times as if they break into view from the background, in the manner of someone gasping for air at the surface of the sea after a long apnea dive, asserting a right to exist. Their shapes create visceral, distorted perspectives.

“It makes me constantly frustrated, because it was always men painting female models who are just standing still, not really doing anything,” she said in conversation with essayist and art critic Jonathan Griffin, referring to the traditional art historical representation of the female figure in Egypt over the last one hundred years.

Samir speaks of “geological forms” and “narrative climax” and in Flickering by the Lotus Pond or the ambitious Hide and Seek (2021) we sense that these apparitions emerge from Promethean-like clay—potent and primordial. In such speculative caves, Samir, who has won a Dutch Royal Award for Modern Painting in 2021 and was on show at Frieze London (2021), conveys in her frescoes the human side of playfulness and flesh.

Lalla Essaydi’s “A New Gaze,” on show at Edwynn Houk gallery, also ambitions to break away from externally-imposed constraints. In her body of work, Essaydi (b.1956) seeks to subvert 19th-century Orientalist visual tropes in 14 chromogenic prints. The prints pay homage to portraiture, except for one still life, in soft, desaturated sepia hues, and more graphic composition playing on traditional Islamic tile patterns, such as in Harem #14B (2009), and colorful interiors, in Harem Revisited #59 (2013) and Harem Revisited #33 (2012).

These tableaux place women at the center of our present gaze, overlaying the weight of an intrusive past. The women wear robes matching their surroundings—as if they are props or accessories to enhance a scene. In Les Femmes du Maroc: Fumée d’Ambre Gris (2008), the protagonist looks like a priestess or new Circe inspired by John William Waterhouse’s brush. Converging Territories #30 (2004) shows different generations of women and girls and their differentiated relationship with the display of their physical attributes. The eldest is veiled and fully clothed, while the youngest shows her head and face to the camera. It’s unclear whether Essaydi tells us that a younger generation of women will enjoy more personal freedom, or, in the less optimist view, that the girl’s destiny is for her public person to ultimately disappear behind heavy clothing.

In style, the prints remind of Léon François Comerre’s L’odalisque à l’éventail and William-Adolphe Bouguereau’s Girl with a Pomegranate (1875) which stereotyped the exoticism of so-called Oriental women through distinctive costumes, hair, and scenography. But because her silhouettes are meant to visually blend in the respective scenes of “A New Gaze,” Essaydi underscores the notion of reification and disposability. In a group, standing, veiled and unveiled, dancing, and reclining, our contemplation is not neutral—it’s a contested terrain.

Essaydi also adds her own spin to the tradition of pan-Arab lettrism, prevalent in modern Arab art, for instance in the work of Algerian-artist Rachid Koraïchi. This movement, called Hurufiyya, blends Islamic heritage with aestheticism and symbolism. In “A New Gaze,” Arabic calligraphy derived from henna paste embellishes the women’s white robes and skin. To some extent, it works as a trompe-l’oeil and an homage to the traditional tattoos of the Amazigh people in Essaydi’s native Morocco and across North Africa. Yet the markings mostly confirm the bodies of the women as canvasses, blank paper, until stamped and appropriated.

Orientalist art, once decried as a legacy of colonial enterprises in North Africa perpetuating othering, has recently regained popularity in Gulf countries. Qatar has announced this year that it will build the world’s largest museum of Orientalist Art, designed by architect Jacques Herzog of Herzog & de Meuron.

In her archetypical world of feminine drapes and veils and relying on the motif of the harem, Essaydi reinterprets rather than disrupts the Orientalist genre. Visually, the interrelated prints are stunning. The story they tell conveys the difficulty to transcend accepted gender roles and representation of domesticity.

“I wish to present myself through multiple lenses—as artist, as Moroccan, as traditionalist, as Liberal, as Muslim. In short, I invite the viewer to resist stereotypes,” Essaydi writes. The artist who has lived in Morocco, Saudi Arabia, and France, has exhibited in the Museum of Fine Arts, Boston, and the San Diego Museum of Art. Her works have been acquired by institutions such as the Los Angeles County Museum of Art, Art Institute of Chicago, and the Brooklyn Museum of Art.

The title of Walid Raad’s new show, “We have never been so populated” at Paula Cooper Gallery elevates an “I” to a “we” and refers to the army of ghosts that continuously prompts the Lebanese-born American artist to engage with the interwoven narratives of the Lebanese civil war (1975-1990).

Under the “Atlas Group”—a fictional archive project created by Walid Raad—the artist tests our gullibility. Did a Christian militia really rear birds as weapons, to disrupt the ecosystem of its enemies, which we see in the show’s eponymous collages? Did a Lebanese Army retired officer truly code-name famous political leaders—François Mitterrand, Margaret Thatcher, Muammar Gaddafi, and others—by matching them to botanical species? And what about the three waterfalls, which we see on single-channel videos, that allegedly continuously changed names according to the different patrons du jour during the civil war? For a less versed audience, I wished that accompanying texts in the show mentioned the Atlas Group more explicitly. Uninformed disorientation can be seriously misleading if people take it at face value.

Walid Raad (b.1967), who has recently completed a series of exhibitions at various European institutions in 2021-2022, plays on the illusion of first appearances and our uncanny, human interest for the peculiar, such as gold and silver objects depicting arthropods, found in a private collection in Jordan. In doing so, he engages with a more fundamental question, which is to challenge one-sided truth, objectivity, and epistemology in matters of war and life.

Raad reinstates a prismatic blurriness; like watercolor, his imaginary brushes bleed into shapes. Imperfect narration serves as a significant medium to incarnate history and to contribute to intergenerational memory. Legacies are fundamentally multilayered. Fantastical details hark back to the epic genre—their function isn’t scientific, forensic veracity since “the chronicler is a story-teller,” writes Walter Benjamin, in Illuminations (2019). “Its place,” he adds, “is taken by interpretation, which is not concerned with an accurate concatenation of definite events, but with the way these are embedded in the great inscrutable course of history.” 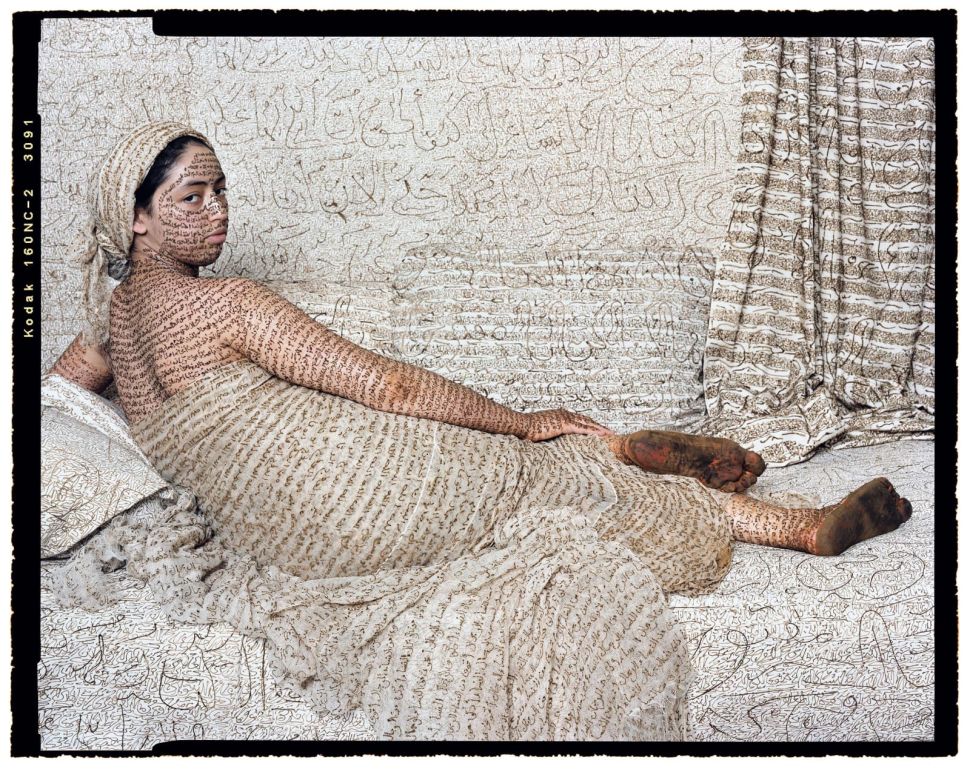