Female-fronted series seem to be the trend this week, as favorites like The Flight Attendant and Russian Doll return while Roar joins the ranks of feminist TV. Plus: one of the biggest blockbusters of the year debuts on streaming, an indie you might’ve missed is here, and a new take on the western premieres. There’s plenty to choose from, but you should pay special attention to the following titles.

If the first season of existential comedy Russian Doll was a riff on Groundhog Day, then Season 2 seems to be a new take on Back to the Future. Created by Amy Poehler, Leslye Headland, and star Natasha Lyonne, the series tracks the time-defying life of Nadia in New York City. Season 1 saw Nadia stuck in her 36th birthday party, but this time around she’s just shy of 40 and ends up traveling to a time before she was born. If it sounds complicated, don’t worry—it’s tons of fun that still packs an emotional punch. Season 2 of Russian Doll premieres Wednesday, April 20th.

Written, directed, and produced by Mare of Easttown’s Craig Zobel, this 2012 indie thriller follows a similar path of small town trouble. Based on a true story, Compliance focuses on the workers of a fast food restaurant who get tangled in a twisted phone scam: an unknown caller claiming to be a policeman orders the restaurant manager to strip search her young employee, who he says has stolen money. As the caller’s requests get stranger and more violating, few voices of reason emerge and blind obedience persists. Ann Dowd stars as the dangerously gullible manager who allows it all to happen. Compliance starts streaming Friday, April 15th.

This new series promises to be quite the interesting genre hybrid, and it just might be the first supernatural western thriller to ever grace the small screen. Outer Range takes place in a small but sprawling Wyoming ranching community, one that gets upended by a series of strange mysteries after the arrival of a drifter. Josh Brolin stars as the man at the center of this apparent conspiracy who must fight to keep his land and his head, and the cast also includes the likes of Imogen Poots, Lili Taylor, and Will Patton. Outer Range premieres Friday, April 15th.

Whether you missed The Batman in theaters or want to watch it again to unravel its sprawling mystery, you’re in luck: the massive hit is streaming this week. Helmed by Matt Reeves, the man behind the two most recent (and arguably the two best) Planet of the Apes movies, The Batman is a blockbuster that’s a breath of fresh air in its intelligence and craft. The newest iteration of the caped crusader is played to moody perfection by Robert Pattinson, aided by some stellar supporting turns from Zoe Kravitz, Paul Dano, and Colin Farrell. The Batman premieres on streaming Monday, April 18th.

A pulpy thriller, a dark comedy, and a meaningful drama, The Flight Attendant really took off in its first season. The Big Bang Theory star Kaley Cuoco staked her claim in prestige TV with her role in this series as Cassie, the alcoholic sex addict-slash-one-woman investigative team who works as the titular flight attendant. Though last season’s major murder is now solved, Cassie’s international exploits have provided her with a new job as a CIA civilian asset. Now in Season 2, espionage and trauma unpacking ensue! Season 2 of The Flight Attendant premieres Thursday, April 21st.

If you’re a fan of the gone-too-soon GLOW or simply want to watch several top-tier actresses do their thing for 30 minutes, then Roar is certainly the show to watch. This new anthology comes from the women behind GLOW and other shows like Homeland and Orange is the New Black. Each episode features a different feminist fable, showing specifically female experiences in new and surreal ways. On screen talents include Nicole Kidman, Cynthia Erivo, Alison Brie, Betty Gilpin, Merritt Wever, and Judy Davis—just to name a few. Roar premieres Friday, April 15th. 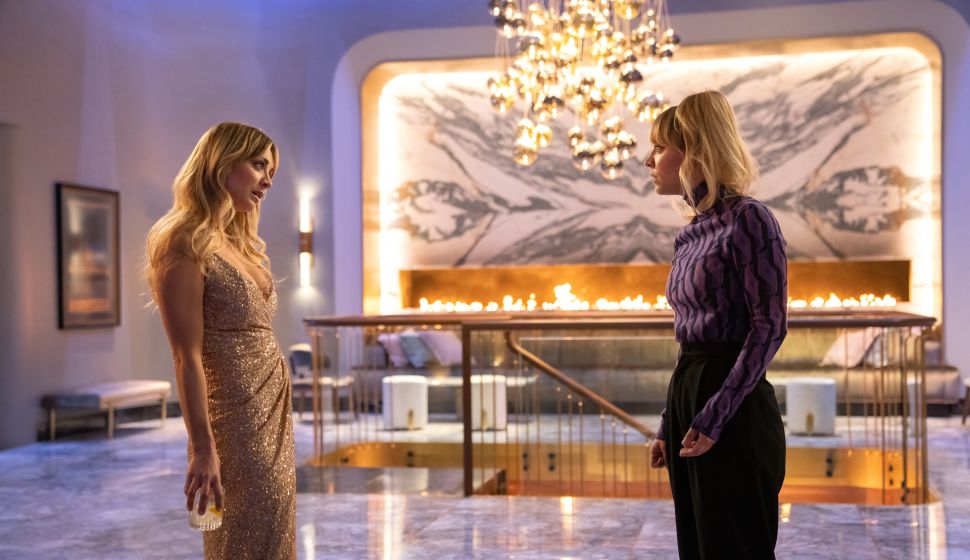