“The Temptation to Exist,” Alfredo Jaar’s new show at Galerie Lelong,  consists of two spaces—the first a dark room with a large neon sign that states the following phrase by the Roman stoic philosopher, Seneca: “What need is there to weep over parts of life? The whole of it calls for tears.” This light installation takes up an entire wall of the gallery. In a separate room is a group installation consisting of 95 works by 72 artists, many of the artworks related to activism or political struggle. They are stacked one on top of the other, or strewn across the floor, in what Jaar calls in the press release for the show, “a space of resistance, a space of hope.”

The deadpan language from Seneca set the tone for the entire show. His statement (which I find hard to read without laughing), much like the rest of the work on display, is removed from its original context. It is stripped of humor or emotional tone and presented on the gallery wall like leftover condiment on a white dinner plate. During my visit, a class of children (extremely well-behaved and perhaps from a smart local private school) came in two by two and sat down beneath the Seneca sign. I wondered how their art teacher would impress upon them how the whole of life calls for tears. I wondered if they would be taken into the room with the group installation and if their teacher would speak to them about Valie Export’s 1969 photograph, Action Pants: Genital Panic. This is a dramatic photo of a woman cocking an uzi, her hair wild, and her crotch girded in a skin-like loincloth. Fortunately for the childrens’ chaperones, the installation room is so emotionally detached, this excellent photo could probably be taken in without any corruption of childhood innocence. This removed quality is good for the children perhaps, but much less interesting for the casual adult viewer.

There are many extraordinary works in “The Temptation to Exist,” but put together they are denuded of feeling. Even Art Workers’ Coalition’s “Q. And babies? A. And Babies”—a horrifying lithograph depicting a roadside massacre of several families, with the title words inscribed on top and bottom like the head and tagline of an advertisement—turns away from and refuses its own triggering content.

In the group installation, dated video art by Yoko Ono, Jaar’s ink on vellum drawings of Antonio Gramsci, and Diamond Stingily’s Entryways, 2016 (literally a door with a baseball bat leaning against it) are side by side with photos from protests and picket lines and vivid photo portraits by Shirin Neshat, Zanele Muholi, and Seydou Keita, among other artists. While the intention was perhaps to connect liberatory struggles all over the world, the overall effect is that of redundancy and defeatism. United in their inability to materially impact reality, the installation stands for itself alone, and yet borrows legitimacy from the many serious struggles represented on its walls.

This exhibit is in contrast to Jaar’s wonderful video installation at this year’s Whitney Biennial. 06.01.2020 18.39 (2022) is everything that “The Temptation to Exist” isn’t. It is an immersive look at the BLM protests in DC in the summer of 2020, from the point of view of a protester. The viewer is forcibly dragged into the march and can feel police helicopters overhead from the heavy-duty wind turbines blowing. The collection at Lelong, on the other hand, takes a distant look at all forms of protest or political turmoil.

That we are culturally and artistically fragmented is undoubtedly true and has been true since many of the exhibited artists in “The Temptation to Exist” were young radicals and practicing activists. Why contemporary artists choose to contribute to that fragmentation instead of forging new bonds of connection is probably caused by the needs of the market. A story could be told through a number of the photographs in “The Temptation to Exist.” Gino De Dominicis’ Tentativo di Volo, depicting a figure leaping off a mountain, their arms cast wide as in a crucifixion, probably tells a fascinating story. As does Valie Export’s From the Underdog File, depicting a woman walking a man on a leash across a city street, and Kara Walker’s gorgeous Just Be Done With It, showing a black figure wrestling a white one off a cliff. However, too many works in the exhibition lean into the old-fashioned idea that the end-all be-all of radical art is offending the sentiments of the square. “The Temptation to Exist” buries such stories in maximalist clutter and hides where it could reveal.

“The Temptation to Exist” is not a good exhibit, but it will probably be a successful one. Good and bad art are mixed in so no object stands out and much is reduced to the level of a jumble sale. Nevertheless, the exhibit will make a lot of money for a lot of talented artists of color. The installation cashes in on the Biennial’s politics and what some believe (or want to believe) is a trend towards left radicalism in art.

Part of the problem is that “The Temptation to Exist” is stuck in a different time, namely the 20th century. A bit past its sell-by date, this roomful of apocalyptic ephemera is trying very hard to be relevant. Yet, Letizia Battaglia’s sexy photos of Pasolini and Jaar’s iconic Gramscis could have graced dorm room walls 30 or 40 years ago. The absurd neon Seneca quote, combined with the closet of curiosities, is reminiscent of an article in Apartment Therapy.

Black and brown artists getting attention, making money, showing their work in a prestigious gallery is all to the good, of course. The next step might be allowing some of these artists the space and resources to tell a complete story, instead of just a fragment. How much better an exhibit it would have been had Jaar given the many great artists on display the ability to show the throughlines that connect their liberatory struggles. 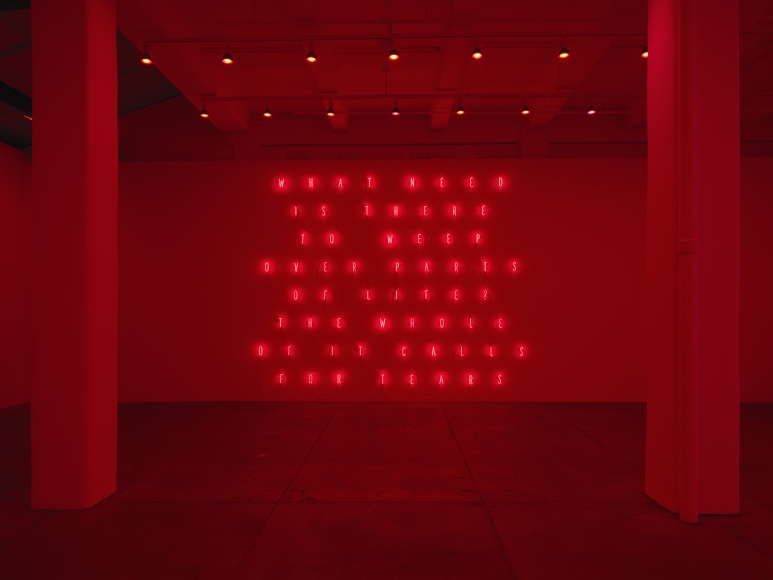