The ski season might be over, but that doesn’t mean that there aren’t plenty of reasons to plan a trip to Aspen during the warmer months. An Aspen jaunt is always a fun experience, and the summer is no different. Even though you won’t be hitting the slopes or having an après-ski moment, there’s still plenty to do, and you just might enjoy it even more without the bitter cold—think lots of outdoorsy moments including hiking, biking and golf. And, of course, don’t forget about Aspen’s culinary scene, as it’s typically far easier to score a coveted reservation at the most popular restaurants during the off-season.

Speaking of dining, summer is also when gourmands descend upon the chic mountain locale for the annual Aspen Food & Wine Classic, which this year begins on June 17 and ends on June 19. Those aforementioned reservations might not be quite as readily available then, as during the three-day experience, the best of the best in the culinary world head to Aspen for events including cooking demonstrations, educational panels as well as wine and spirits tastings.

If you’re one of the lucky attendees heading to Aspen for the Food & Wine Classic, you’re going to want to figure out your accommodations, and fast—after all, the festival is already sold out. Luckily, we’ve done the hard work for you, and found the most luxurious hotels to book for your trip to Aspen, even if you’re not making it to the Food & Wine Classic this year. Below, see the plush Aspen hotels to consider for your next trip to the mountains.

The chic Hotel Jerome is located in one of the oldest structures in Aspen; it dates back to 1889. The hotel became a part of Auberge in 2011, and unveiled the results of an extensive renovation the following year, including 99 guest rooms, all of which are adorned in an elevated mountain design aesthetic with plenty of wood and stud accents. The hotel is going all out for the Aspen Food & Wine Classic this year, as guests receive the “Hotel Jerome Epicurean Passport,” which provides access to exclusive programming and curated events, including a special chef’s dinner courtesy of Chef JJ Johnson complete with wine pairings, as well as entry to the Casa Dragones Cocktail and Caviar Lounge at the hotel’s pool, plus a speakeasy. Hotel Jerome’s everyday dining options are lovely as well; there’s Prospect, J Bar, Living Room and the underground Bar Harriet. The hotel also has a luxe spa and an outdoor pool and tub, and during the season, they have a special ski concierge. Hotel Jerome.

The Little Nell is widely considered to be the crème de la crème of Aspen hotels, and frequent guests often refuse to stay in any other accommodations in the ritzy mountain town. The hotel is composed of 92 rooms, all of which have gas log fireplaces and are adorned in neutral tones with a minimalist, airy and light-filled atmosphere. For dining, there’s the casual Ajax Tavern as well as the more formal fine dining option, Element 47, which is hosting two dinners during the Aspen Food & Wine Classic this year. The Little Nell.

The lavish St. Regis has a dedicated following of loyal Aspen-goers, and for good reason. The hotel received a reported $40 million renovation in 2012, and while the interiors were freshly updated, the exterior at the St. Regis remains in all its Gilded Age glory. The 179 rooms are outfitted with plush Frette linens and custom Ralph Lauren furnishings, but don’t get too comfortable lounging around in your accommodations—there’s so much to do, including partaking in the hotel’s daily champagne sabering tradition, which takes place in the lobby every single day in the winter and summer. And if you need to leave the hotel, just reserve the St. Regis’ complementary in-house BMW X7 to frolic around. The hotel, which will be hosting a few Food & Wine Classic seminars this year, always has a major food focus, as it’s home to the Chefs Club by Food & Wine, a restaurant that switches up its chef line-up twice a year. There’s also the more formal Velvet Buck restaurant, plus the Mountain Social Bar and Lounge, which features live music and cocktails. If you have a moment in between culinary events, definitely try to fit in a treatment at the 15,000-square-foot Remède Spa, which offers custom services like a CBD healing massage. St. Regis Aspen.

The W Aspen opened in August 2019, marking the first new hotel in the ski town in around 25 years. The hotel is composed of 88 rooms, five suites and 11 residences, all of which have a decidedly modern aesthetic, and some of the rooms have the somewhat unusual addition of queen-size bunk beds, which is surely an attribute that would largely appeal to families. The hotel is also home to two restaurants and an impressive outdoor deck that’s outfitted with a pool, hot tub and fire pits. W Aspen. 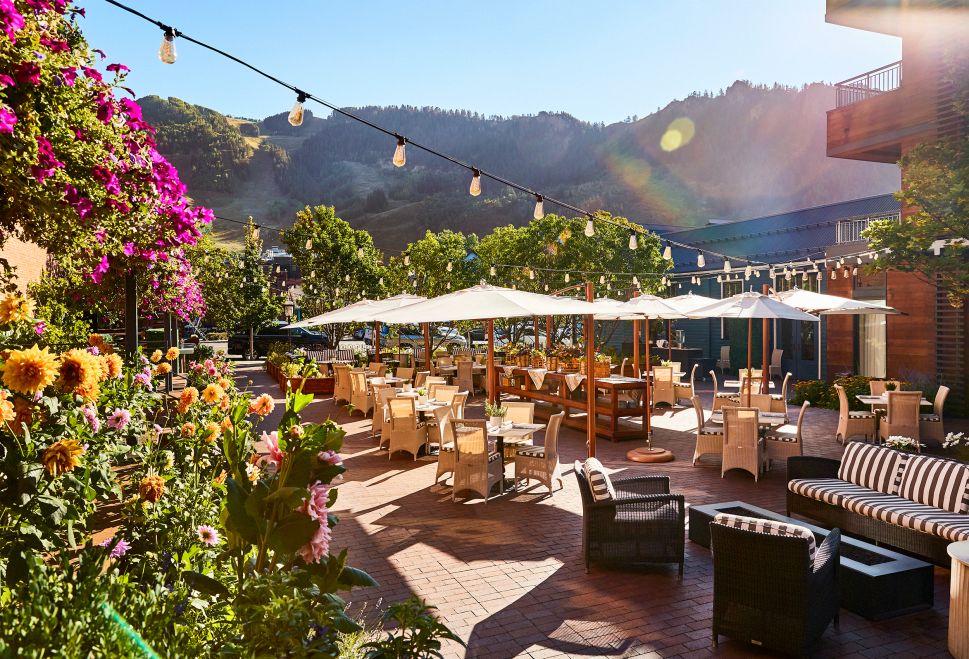