When Observer virtually connected with Chinese artist Sun Xun, he had transformed an unfortunate situation into a proverbial opportunity. Sun Xun (b.1980) traveled from Beijing to Shanghai in March 2022 to prepare the opening of his new solo show, “An Infinite Journey” at ShanghART gallery, which presents mixed media work displayed as a playful and multidimensional expressionistic mood board of mythological presents and futures. Things didn’t go as planned.

On the eve of the opening, the government asked to postpone the show. COVID-19 had surged again. “I thought we would only need a few days,” he told Observer. Then lockdown orders came the following day. “The government told us that it would last for five days,” he adds. The artist bought woodcut materials to keep himself busy ahead of this, except five days turned into five more days. “And now, it’s been ten five days,” he laughs, from his hotel room—one of 26 million people under strict quarantine in Shanghai.

Between empty Japanese beer boxes, heartfelt jokes, and cigarette drags, he speaks about his experience of confinement, artmaking, and resilience. When I ask him about his living conditions, he refuses to complain and dwell on daily annoyances. “Now I started working on a new animation film,” he says gleefully of the occupation that fills most of his days.

Sun Xun established the Pi Animation Studio in 2006 and has since then participated in several festivals, such as the Torino Film Festival in 2007, and Germany’s Internationale Kurzfilmtage Oberhausen in 2016. He pans his phone camera along a sample woodcut-like frame of a graphic, high-contrast sketch that looks like Shanghai’s Bund in its pre-war heyday. “Art doesn’t need an excuse. Art is everywhere.” And it is. All over his hotel bathroom, toilet lid, mirror, windows, and more. His hotel room is his new studio.

When he ran out of art supplies, he reverted to beer boxes that hotel staff discreetly provided him and paper cut for white inserts. “I use fruit and my shoes to make animations. Even beer bottles. I use everything,” he says. Sun Xun graduated in printmaking at the China Academy of Fine Arts in 2005, but what he likes most is to improvise, recycle, mix, and challenge externally-imposed limits.

Sun Xun’s distinctive style borrows elements and techniques from traditional ink-based Chinese art to create resolutely new landscapes and contemporary layers that engage with the notions of surrealism, fantasy, and alternative world-building. His work recently featured in New York City, in the Asia Society Triennial “We Do Not Dream Alone” in 2020-2021. He then worked closely with curator Susan L. Beningson on July Coming Soon (2019), an artwork which questions our relationship to history, truth, and freedom—themes that find an eerie relevance in today’s blurry storytelling.

“In Japan, I can get excellent quality ink. In the US, good acrylic and oil. I use different styles. In Europe, I use pigments. In Holland, I used city trash. We call it trash but it’s very good art material. I use possibilities. If you can only do painting, it’s not enough. Artists should do everything, in every situation. Art is freedom. Freedom is more important than oil, woodcut, and sculpture. Freedom gives power to the artist, not the materials being used. Art is about your spirit not your skill,” he says, reminiscing about a time when he could travel and visit other countries far more easily than now. He pauses. “New York is my favorite city.”

Though Sun Xun experienced a short confinement in 2021, these unexpected 50-days-and-counting in a Shanghai hotel room feel different this time. He turned to artmaking and started documenting his practice online to maintain sanity and routine—late rise, calligraphy to appease his heart, lunch, work through the night, punctuated by occasional and not-so-legal drinks and singing. (“Drinking and smoking is very important, too!”)

Sun Xun reflects. He analyzes. He weighs and carefully choreographs his interaction with theoretical proximity and distance. “What is life? Life is your body, and your soul.” While our thoughts can be limited, he believes that our souls can be boundless, mobilizing imagination and transcending what appears like a struggle at first.

“Imagination has more power than an army,” he proposes, seeing in imagination a reference, essential toolkit in an artist’s adaptable palette. Imagination is an escape, a way to freedom. Reflecting on his current confinement, he philosophizes on the meaning of deprivation at large. “Our life can be our jail, too,” he says unless we flip our perception towards seeing fullness in void, and agency in hardship. “Let’s fight this shit!”

Yet his parents’ health is deteriorating thousands of miles away and he’s not able to visit. Pandemic-related restrictions are being strictly enforced and one can’t travel to cities in lockdown under China’s “zero COVID” policy even though it’s likely unsustainable.

Isolation is relative as Sun Xun is able to follow international news. He wants to convey his worry about the ongoing war in Ukraine and what this could mean for China. “I don’t agree with this war, it’s very stupid. I support Ukraine. Write this. I support Ukraine.” He repeats it. It’s important for him.

Despite not having visited any of his usual corners—New York, Japan, Europe— and many friends abroad, Sun Xun finds solace in exploring the potentiality of animated feature film as a malleable medium and language form that expand borders. In this search for expansive movement, he perhaps indirectly emulates one of his protagonists, Xiaozhi, who travels to the land of Luocha described in his postponed solo show as “a nation with no history, no memory” ruled by a ghost.

His new feature film, which is being edited at the time of writing reinterprets the tradition of the epic and fantastical tales. In the film, Sun Xun includes different aesthetics such as those borrowed from the Chinese Han dynasty, but also Islamic features (there’s over 20 million Muslims in China), oil painting, woodcut, and Cold War-era newspaper once gifted to him by a German collector. It’s a big undertaking. His composer is also in lockdown and everything takes much longer than usual. But it would take bigger hurdles to break his resolve. “My spirit is totally free. It is still traveling,” he says with a smile behind his metal-framed glasses. “I can’t stop,” he adds after a thoughtful cigarette puff. “Never stop.”

He laughs before recomposing himself. “Let’s make a new culture!” 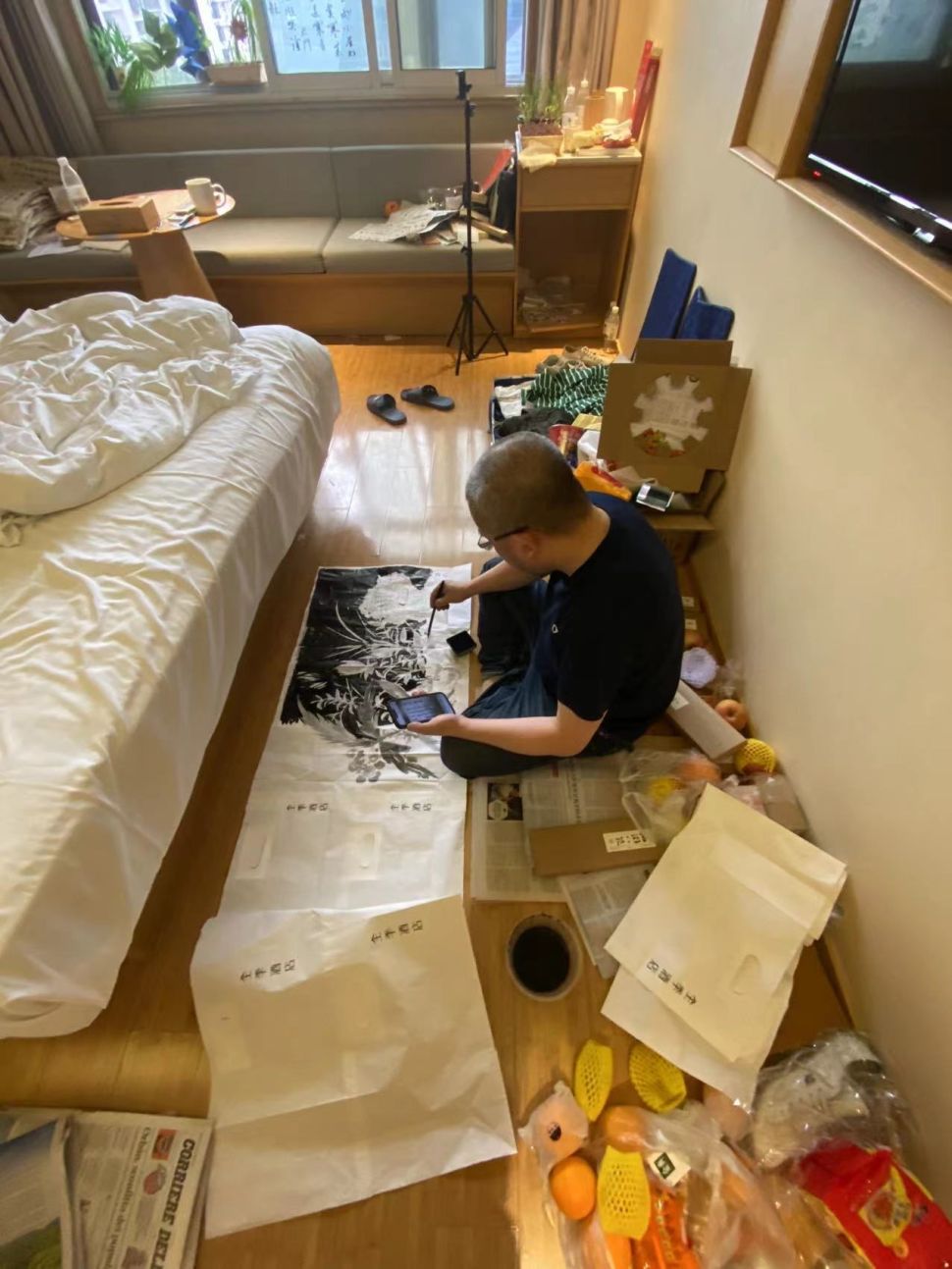