The past several years have seen a dramatic increase in the amount of positive, inclusive marketing efforts centered on the female body and womanhood in general. The overarching idea is that the body is a source of pride to the autonomous woman who possesses it. The national chain where I get waxed encourages its freshly depilated clientele to strut confidently into the world. The online boutique where I buy bras bills its extensive size range as part of a bold inclusivity crusade to outfit “every body.” “Power in motherhood” proclaims a popular spin studio, while the website of the industry’s biggest shapewear brand cheekily announces its corporate “HERstory” in bright red letters. International Women’s Day and Women’s History Month have become occasions for businesses, from beauty concerns to less-obviously-female-focused banking, to uncontroversially and unspecifically bill themselves as on the side of women’s empowerment, bodily and otherwise.

For all these vague statements of sisterhood, every single one of these, and most other, brands have remained deafeningly silent on the most fundamental issue facing women now: the rollback of reproductive rights crystallized by the leaked Supreme Court brief signaling the imminent reversal of landmark 1973 decision Roe v Wade.

In this supposed age of “woke capitalism” and milquetoast you-go-girl empowerment, why have so few companies spoken out on abortion rights that have been encoded into law for half a century? And, given corporations are, despite their rosy rebranding as “communities” or even “families,” amoral, profit-seeking entities, should we even expect that they take a principled stance on abortion rights, and be outraged at its absence?

First, it’s worth noting how halting the recognition of women as consumers, much less full citizens, has been. For much of American history, advertising that targeted women sold products considered almost exclusively feminine: think care of body, home, and family. Once more women worked outside the home, and then gained access to credit, they were marketed edgier items in a way that recognized, and even celebrated, this newfound independence: a lady could smoke cigarettes marketed with the slogan “you’ve come a long way, baby” after going for a jog in her “Liberator” sneakers. But these congratulatory advertisements rarely did much to disrupt the assumption that an ideal woman invested her money and energy in being slender, fashionable, and self-disciplined.

But as ideas about women evolved, so have ideas about effective advertising. The social revolutions of the 1960s often explicitly critiqued capitalism, but American business deftly morphed to market a version of hipness and counterculturalism compatible with both this irreverent sensibility and market imperatives. This “conquest of cool,” as historian Thomas Frank styles it, explains why instead  of categorically avoiding controversy, major corporations increasingly calculate that taking stances on hot-button issues can be worth the reputational risk—and even insulate them from it. In a moment when “silence is violence” is a catchphrase, speaking out on racism, gun control, and LGBTQ rights has become more common: when Nike signed Colin Kaepernick despite (or because) his taking a knee during the national anthem, some conservatives burned their apparel, but others sported swooshes ever more proudly. After the murder of George Floyd, corporations from Peloton to McDonalds clamored to showcase their solidarity in the fight against systemic racism. Each school shooting garners similar statements, often explicitly indicting those who stay silent or, worse, offer only “thoughts and prayers.” We are two weeks out from Pride Month, and if recent years are any indication, financial institutions and grocery stores alike will be dutifully wrapping themselves in rainbow flags.

And yet the line seems drawn at abortion rights. I spoke with an executive at a major media company that often takes progressive public stances; she enthusiastically came aboard precisely for this outspokenness, and is proud of her employer’s record, and of her own role in it. But when months ago, she floated a proposal to craft messaging strategy around the likely overturn of Roe, her superiors told her to slow down. In stark contrast to the aftermath of George Floyd’s murder, or more recently, the Don’t Say Gay bill, when her team was immediately authorized to spring into action to partner with activists and nonprofits, she was told “further research was needed” in the case of reproductive rights. Conversations about an action plan have restarted since the Roe news, but she was frustrated at how “we absolutely do the right things on these other issues, but when what is considered a ‘traditional women’s issue’ is at stake, there’s just that much more pause.”

This silence on abortion can feel like a gut-punch, but those who have been paying attention are disappointed but unsurprised at the narrow definition of which “women’s issues” are perceived by brands as worth courting controversy. A decade of “girlboss” inspo—and the expansive critique that followed—has made crystal clear the hollowness of corporate feminism, in both outward messaging and internal practice. The examples touch almost every issue affecting women. Nike announced its embrace of women athletes of all sizes, but it turned out was enabling the eating disorder of one of its athletes. So too did it celebrate active motherhood—while cutting the pay of pregnant runners who took time off from competition. Rent the Runway touted its commitment to fair labor practices and female leadership—and was accused of exploiting its workforce comprised mostly of immigrant women. When a Levi’s executive who began tweeting about the impact of school closures on children and mothers, her employer pushed back so strenuously she ultimately resigned. (Levi’s has taken a stand on the Roe decision, but the resistance to one of its top women executives addressing an issue affecting millions of women and children speaks to the limitations of this advocacy.) And across the board, women remain underpaid relative to men and underrepresented in C-suite positions. To the exec I spoke with, changing that representation is at least part of the solution to the situation that enabled this silence on abortion rights. “I know, in part, that we acted so bravely on LGBTQ issues because for my boss [a gay man], it was personal.” What if we had more women in positions of power to make their  “personal” issues a priority?

I should say that some companies are taking stronger action to ensure abortion access for their own employees, and to a lesser extent, to fight for reproductive rights more broadly. But these moves aren’t nearly energetic enough, especially given the standard that now exists around companies speaking out on fraught political issues. During the Black Lives Matter protests in summer 2020, a common criticism was that brands were “only posting a black square” on social media but doing little else to combat structural racism. Peloton emerged as a positive exception, committing to company-wide policy changes including changing hiring practices, raising wages, and donating to the NAACP, in addition to featuring Black instructors more prominently on the platform. On reproductive rights, however, Peloton’s official account—and unofficially, many of the instructors—have been silent. It would feel like progress to be able to call out companies for not fully living up to their professed commitment to women’s reproductive rights, but we are not even there yet.

Indeed, one of the of the nation’s largest public relations firms advised its clients to “stay silent” on abortion rights, for it was a “no-win” issue. I’m no PR expert, just one frustrated feminist-scholar-consumer, but I can only surmise about this logic: is the idea that abortion rights appears to a coveted, cool, young consumer as an issue of their mother’s generation—and is thus unlikely to fire them up—yet is still sufficiently controversial to alienate others, so not worth taking on? Well, it should be said that the maintenance—not even expansion!—of abortion rights has the support of a majority of Americans, and even more so—67 percent—of voters under 45. Anecdotally, the crowds of high school and college students at #BansOffOurBodies protests in the last several days suggest that young people are impassioned by this issue and would support companies who articulate commitments to women’s reproductive rights as loudly as they do to other issues perceived as less inflammatory—or worth taking heat for.

Policy that protects abortion rights is worth fighting for, and yes, we should absolutely pressure corporations to step up the solidarity. Brand messaging on race, sexuality, age, ability, and so forth is of course often cynical and self-serving, but even in an amoral capitalistic system, representation matters and can move the needle in meaningful ways. Companies have a choice not to parrot the most cautious, focus-group-tested version of their consumers’ mindset, and instead to move the culture forward—if they are brave enough to try. “It’s our job to educate,” the media executive told me with measured optimism, confiding she is glad to see “people are starting to shake in their boots” about how the Roe decision might set a precedent to roll back Brown v. Board of Education or Obergefell v. Hodges, since the specter of that slippery slope might be the only thing, for now, that spurs companies cowardly about questioning patriarchy to utter more than the usual statements of shallow sorority. 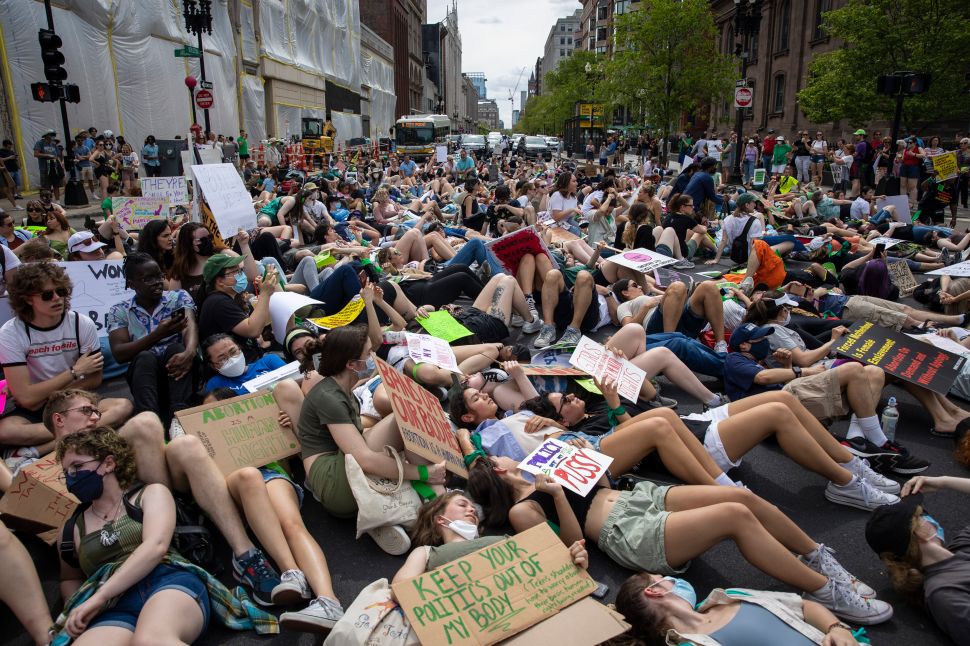