Many have compared the experience of watching Downton Abbey to being wrapped in a warm blanket. Although the six-season TV series had its tragic moments (we miss you, Sybil), that was exactly what it offered every Sunday evening on PBS. A 2019 film, also titled Downton Abbey, continued the storyline and urged a similar feeling: comfort. Now, after lockdowns and illnesses and the deaths of loved ones, a sequel film, Downton Abbey: A New Era, is just what the doctor ordered, bringing with it a warm sense of kindness and optimism.

The setting is 1928 and the Crawley family has found themselves at a turning point, with the modern age making its way into the traditional walls of Downton Abbey. The roof of the historic manor home has begun to leak and Lady Mary (Michelle Dockery) convinces her father Robert, the Earl of Grantham, (Hugh Bonneville) to take a chance by allowing a Hollywood film crew to use the property for a silent movie. The arrival of two Hollywood stars, the glamorous Myrna Dalgleish (Laura Haddock) and the dapper Guy Dexter (Dominic West), sends the staff into an excited frenzy. It’s a meta storyline—Downton Abbey is filmed in historic English home Highclere Castle, which has been able to refurbish itself with the funds—that draws a lot of laughter and whimsy into the mix.

Meanwhile, news arrives that Violet Crawley, Dowager Countess of Grantham (Maggie Smith), has inherited a villa in the south of France from a man she knew during her youth. Some of the family, including Robert, Cora (Elizabeth McGovern), Tom Branson (Allen Leech) and Lady Edith (Laura Carmichael), travel to see the villa—and uncover Violet’s past. This storyline, while beautiful to watch, is slightly less compelling than the drama at the house, where Lady Mary is forced to step in as a voice actress when the silent film becomes a talkie.

Though Downton Abbey: A New Era exists as a closed chapter of a much longer journey, it does require a familiarity with the characters and their histories. This is a movie for fans, with insider references and jokes intended to captivate those who have followed the Crawley family and their servants for over a decade. Most of the key players from the TV series have returned and the new additions, including Lucy Branson (Tuppence Middleton) and Lady Bagshaw (Imelda Staunton), feel like they’ve been around for years. Enjoyable secondary storylines, like Robert James-Collier’s Barrow finally finding a viable love interest in Guy Dexter, are satisfying because they’re part of a much longer narrative adventure.

Downton Abbey: A New Era is notably funnier than its previous chapters, which feels intentional on the part of screenwriter Julian Fellows. It’s also a tear-jerker on par with that episode where Matthew Crawley met his untimely demise (bring Kleenex). Some may dismiss Downton Abbey as fluff, and perhaps it is. But there’s a place for comforting entertainment that allows us to laugh and cry with characters to whom we feel deeply connected. When times are tough, we go back to what feels familiar and even the swell of Downton Abbey’s score feels like a friend reaching out to hold our hand. Fellows and director Simon Curtis give the audience exactly what it’s looking for and there’s a real power to that. Downton Abbey: A New Era acknowledges that it’s okay to just want that warm blanket. It’s not a guilty pleasure; it’s actual pleasure. If there was ever a time to run into Downton Abbey’s welcoming embrace it’s now. 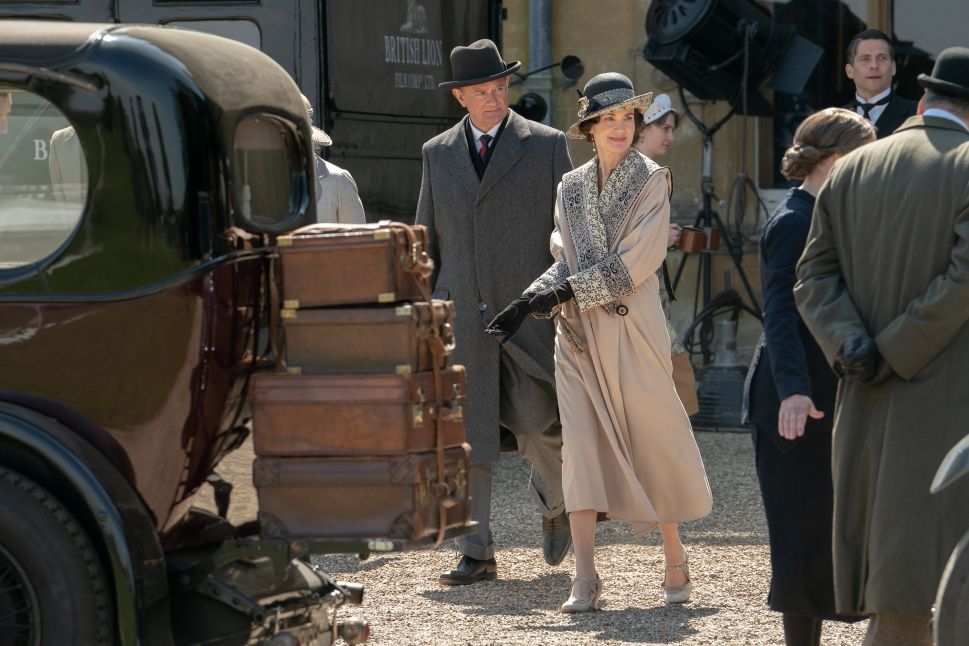