This interview was originally published in James Ledbetter’s FIN, the best newsletter on fintech. Subscribe here.

On the evening of April 26, the New York State Assembly passed a bill by a 95-52 vote that would place a two-year moratorium on “proof-of-work” cryptocurrency mining using fossil fuels. Assuming the bill passes in the Democratic-controlled State Senate and is approved by Democratic Governor Kathy Hochul, it will be the furthest-reaching such law passed anywhere in the world. The bill’s main sponsor was Dr. Anna Kelles, whose Finger Lakes district includes the Ithaca metropolitan area. Observer recently interviewed Kelles exclusively; below is an edited transcript of that conversation.

Observer: Tell me how you came to draft this legislation.

Kelles: It was like 12 o’clock at night, you know, seeing the environment kind of crumbling around me. Just thinking about the sheer magnitude of energy usage from fossil fuels at the Greenidge facility. I had just gotten word on how many retired power plants there were in the state. And I was literally just laying in bed, stressing out, not able to fall asleep. And then thought this is a new industry that’s moving so fast. We don’t really have a handle on it, by the time we do the impact may be irreversible. It reminded me of the anti-fracking fight. And I thought, oh wait, I could push for a pause to give us the time to gather the data we need so that we can do this in a methodical way. I texted my team, who’re really used to me texting all hours of the night and have all learned to turn off the sound on their phone so that it doesn’t wake them up. And I was like, I’ll talk to you tomorrow. So that was the moment, that feeling like we’re going backwards with our energy grid.

Observer: There had been another bill in the State Senate that was introduced last year. Was that an inspiration for you or were you trying to do something different?

Kelles: That was my bill. I wrote it.  I asked [State Senator Kevin Parker] to carry it, but the way that things work when you have 150 legislators versus 63 legislators, is they can review it and it’ll show up in their system first. The way the Senate works is that every Senator can put a list of priority bills and the Senate takes that very seriously. It passed within 24, 48 hours of him introducing it. There was a letter of opposition from IBEW and that pretty much stalled it. Over the summer and fall I worked with unions, with advocates. There were, I think, 13 letters from environmentalists throughout the state. It has been a year of very, very, very intense training and education and outreach to make sure that when people took their vote, they knew what they were voting on, which was a huge, huge shift from where it was last year.

Observer: How likely do you think it is that this will become law?

Kelles: I think it’s very likely. The bill, it’s so important that people understand: it is so modest. It is so modest. It is explicitly a pause on crypto, exclusively in fossil-fuel based power plants. You can’t get any more precise than that. What I have seen is a real attempt to completely exaggerate and mislead the public on what this actually is. Because ultimately if you are a proponent of cryptocurrency and you’re spreading a rumor that is severely false, you know, that New York is banning cryptocurrency or cryptocurrency mining even, then you’re kind of shooting yourself in the foot. I wouldn’t tell the world that, you know, a capital of the industry was closed for business when it absolutely wasn’t.

Observer: You are confident that the governor will support this and not, say, the rival bill?

Observer: Assuming it becomes law, what do you think will happen to the Bitcoin mining industry in the state?

Kelles: I don’t think that this will impact it at all. I think that it’s crazy to say that it’s gonna have a huge impact. The only thing that it is doing is saying you can’t buy up the power plants. Any of the facilities with hydroelectric that they want to do, that they’re doing, they can do, anything that uses electric from the grid. So both of those are completely open for business. Any of the smaller boutique miners—does not affect them in the least.

Observer: On the other side, have you project what the carbon footprint impact will be of this bill?

Kelles: If you put all of the power plants, the 30 power plants in upstate New York, you’re getting into the gigawatt level right now in New York state already. Just look publicly at all of the cryptocurrency mining operations that are either already, operational under construction or proposed for construction, all to be complete and operational by the end of this year. Just that alone is about 1.3 to 1.6 gigawatts of energy. 1.5 gigawatt of energy is the equivalent of 750,000 homes. It is enough energy to power three Buffalos. Buffalo is the second largest city in the state, three times the size of Buffalo. So just to give a sense, all of that will still be in operation by the end of this year. This bill is not retroactive, on top of everything. It’s not even retroactive,

Observeer: Right. Although presumably they can’t renew, if they’re relying on fossil fuel.

Kelles: They can’t renew during this two year period, but none of them have been purchased yet. And Greenidge is already under renewal. So grandfathered in. Again, if you actually look at the bill, it is so modest compared to what it could have been.

Observer: Do you see other states or countries or municipalities enacting similar legislation?

Observer: Any in particular that maybe you’ve been in touch with or think are close to?

Kelles: No, no. I mean, the reason I say I hope so is because air doesn’t have boundaries, doesn’t have boundaries. This industry is moving really fast and power plants that are retired are antiquated technology, they have been replaced because there’s more modern technology, that’s more efficient. If the cryptocurrency mining industry is saying, “we’re gonna be green, we’re the solution,” prove it to us. Don’t turn back to the most inefficient possible fuel-based power plants in the country. If you’re saying that you can be renewable, let’s see it.

Observer: Again, assuming it becomes law, will this have an effect on Bitcoin and other cryptocurrencies moving toward a proof of stake standard, is it going to create an incentive for these cryptocurrencies to change the way they do business?

Kelles: I don’t know if New York alone could have that impact. I would be in favor of that, because proof of stake uses less than 1% of the amount of energy. I think of proof of stake in the context of where we are, on the precipice of irreversible severe climate change. We’ve never been here before. 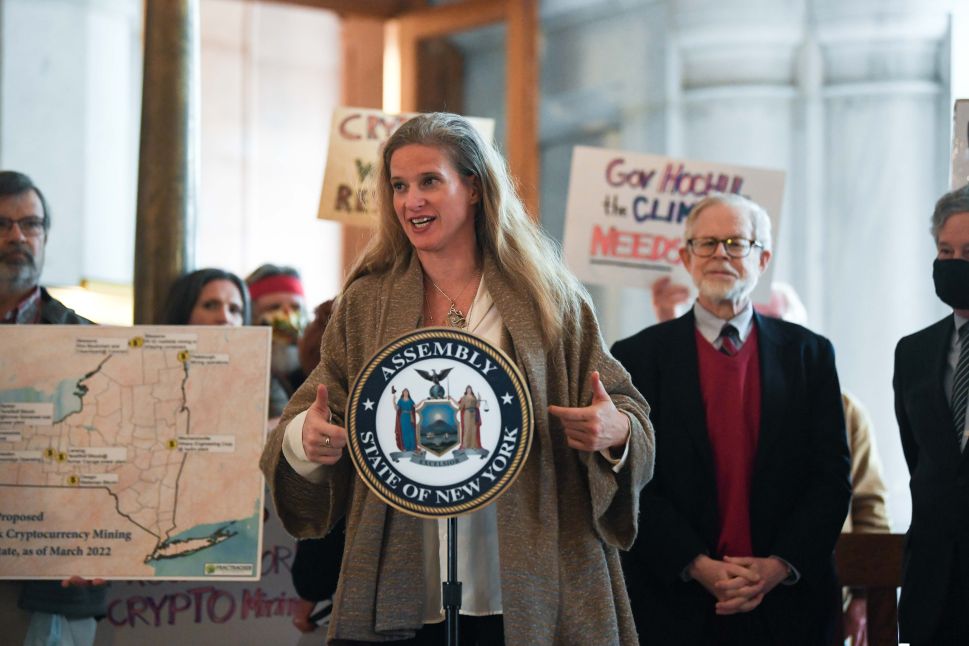