Baz Luhrmann brought a hunk of burning love to Cannes on Wednesday with the world premiere of Elvis, his 2½-hour tribute to Elvis Presley. Streets were jam-packed with dozens of black electric BMWs (the festival’s official vehicle) ferrying the glitterati to an 80-minute red carpet, including not just stars Tom Hanks and Austin Butler, but Australian director Luhrmann’s compatriot Kylie Minogue (who played the Green Fairy in Moulin Rouge!) and Sharon Stone. A handful of Elvis impersonators strutted around the town’s streets, while Luhrmann accented his all-black formal wear (silky shirt, bolero jacket and pants) with a glittering, chain-draped belt and fat, sparkling buckle emblazoned with ELVIS in all caps.

It’s hard to think of another subject—or another filmmaker—whose gaudy, over-the-top, maximalist styles dovetail so perfectly with an event that revels in cinematic peacocking. Lurhmann is a child of Cannes: his 1992 debut Strictly Ballroom was a sensation in the festival’s midnight slot, and his films have been the Opening Night selection twice, for 2001’s Moulin Rouge! and 2013’s The Great Gatsby.

Cannes’ premiere audiences can be notoriously effusive—standing ovations are de rigueur—but Elvis scored an impressively sustained 12-minute firehose of applause after it ended. The candy-colored, kaleidoscopic biopic is a full-throttle, electric-boogie remix of Elvis (a galvanic Austin Butler) and his atom-splitting cultural detonation in midcentury American life, as seen through the eyes of Svengali manager Colonel Tom Parker (Hanks, eerily fat-suited and sporting a bizarre accent that’s Dutch by way of West Virginia).

It’s been 45 years since the untimely death of the outsized boy from Tupelo, Mississippi, who generated hit after hit after hit, from “Hound Dog” to “Jailhouse Rock,” from “A Little Less Conversation” to “Suspicious Minds.” He helped mainstream the liberating, hip-shaking rhythms of rock & roll in the ‘50s, turned Hollywood stardom into his own lowbrow cash cow in the ‘60s, and almost single-handedly invented modern-day Las Vegas with his extended residencies at mammoth casino auditoriums in the ‘70s. Elvis’ career embodies the ridiculous and the sublime, due in no small part to Colonel Tom Parker—the man who took as much as 50% of Elvis’ profits and locked him into a straitjacket of contractual commitments and cheesy merchandise deals. And that’s what Luhrmann wants to stress.

Luhrmann sees it as more than that. “It’s about jealousy,” he explained. “One of my favorite films growing up was Miloš Forman’s Amadeus. Is Amadeus really about Mozart or is it about the jealousy between Salieri and Mozart? And Salieri saying, ‘God, I did everything right and you put all that talent in that horrible grotesque person?’” Elvis is an homage film—make no mistake, its subject is bathed in a fawning light—but Luhrmann is going for a grander statement. “It’s an exploration of America in the ’50s, the ’60s, and the ’70s,” he said. “But it’s also the relation between the art and the sell—the show and the business, the showman and the snowman. That’s what the big idea really is.”

For Butler, it was about cracking that gold-plated legend, the rhinestone-studded, jumpsuited façade that’s an almost impenetrably iconic part of Americana. He spent two years studying every bit of archival footage and audio recording. “I just went down the rabbit hole of obsession,” said Butler, in a baritone drawl still tinged with a bit of Elvis. “That’s the tricky thing: you seen him as this icon or the wallpaper of society, and trying to strip all that away and find the very human nature of him that was deeper than all of that. That’s what was fascinating for me. It was the joy of my life.” It might even get him an Academy Award nomination, too, for a wildly possessed physical performance that captures every pelvic thrust, hip wiggle and lip sneer. “I practiced until it was in my marrow,” he said.

Hanks was not so prepared for his corpulent transformation. “I did not know what Colonel Tom Parker looked like, I had never heard his voice,” he said. “I thought he would be a tall, stentorian guy in a hat, full of bombast.” Luhrmann did such a convincing pitch to Hanks that the two-time Oscar winner agreed on the spot. “The conversation lasted seven minutes before I said, ‘I’m your man. Now, please, show me a picture of what the Colonel looks like.’ Then he showed me. And I thought, ‘Oh my God, What have I done?!?’”

The biggest hurdle Luhrmann faced was winning the approval of the Presley family. Before he started production, he met with Elvis’ widow Priscilla, daughter Lisa Marie, and granddaughter Riley Keough (who, in a twist of showmanship—albeit accidental—that would have thrilled Colonel Tom Parker, was in Cannes this week with her directorial debut, the bittersweet Native American drama War Pony). When Luhrmann had a rough cut ready, he shared it with them. “I can’t tell you how long those two hours were,” he said. And once it was over, he heard that Priscilla was in tears. “I thought, ‘What have I done?’” he admitted. But all was well: he received a glowing text from her a few days later that said the film had really captured his spirit. “She said, ‘If my husband were here today, he would look Austin in the eye and say, ‘Hot damn, you are me.’”

Luhrmann’s main concern was making a 20th century musician feel relevant today. Having already anachronistically used the modern sounds of alt-rock and hip-hop in his soundtracks for Romeo + Juliet and The Great Gatsby, he works the same trick again with Elvis. “I don’t do it make a groovy album,” he said. He wants people to understand what a jolting difference Elvis’ music felt like at that time. “So as Austin is walking down the street, Doja Cat is translating it into rap so that younger audiences who really don’t know Elvis understand how edgy that music was.”

Luhrmann also wanted to communicate that Elvis’ music felt dangerous. He pointed to a 1956 concert at Russwood Park that’s a major inflection point in the film, where Elvis flaunts the authorities with lewd defiance, even licking a prop hound dog onstage. “He did, in fact, hump that plastic dog,” he said. “He used to spit at the audience, roll on the ground. He was the original punk rocker. And the music was so much more aggressive and feedback and louder and scratchy and crazy. That’s real. He did that. I just want a younger audience to feel what it was like to be there.” 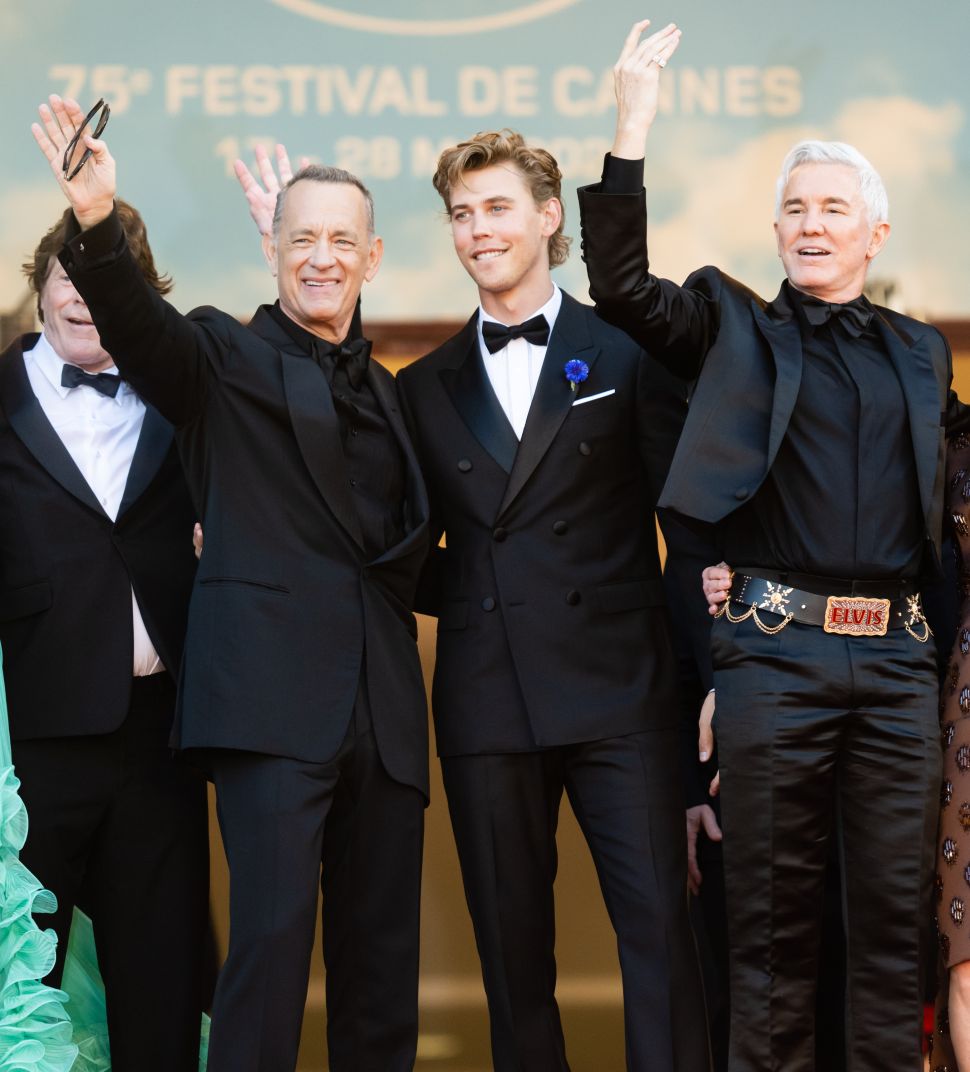