Broadway’s most conspicuous example of life-imitating-art-imitating-life these days has to be Lilli Cooper. The nursing-and-working new mom has serendipitously found herself playing exactly that in POTUS: Or, Behind Every Great Dumbass Are Seven Women Trying to Keep Him Alive.

Cooper gave birth to Bodie McLoughlin on September 7, and the POTUS script arrived on her doorstep in early 2022. “When I realized I was auditioning for the White House reporter who’s also a nursing mom I decided to wear my breast pump when I did my audition tape,” she says.

The ploy paid off, and the motherhood beat is still going on. “It’s funny, I’m doing double duty,” she relays. “I walk off stage at the end of Act I for intermission with a breast pump on, and I go straight up to my dressing room where I pump underneath my fake breast pump.”

She credits two people with helping her make the big jump back into an active career so soon after giving birth: her husband, Paul McLoughlin, and her mother, Tisa Farley. “I really would not have been able to do it without their love and support,” she says. “It is exhausting and taxing, but also incredibly rewarding because I feel like I’m living the dream that I have always wanted: to be a mom and to continue to work. I’m so grateful that I can do both. It’s pretty awesome.”

Selina Fillinger, in her Broadway bow as a playwright, has said she was inspired to write this frantic, manic farce by the helpful harem surrounding Donald J. Trump (though the potus in POTUS is an unseen composite figure). Cooper is one of the play’s seven women behind the dumbass, but not necessarily on the side of the presidential angels. She’s a Time magazine scribe doggedly pursuing the pungent smell of scandal that’s pretty pervasive in that lofty place.

Cooper initially had trouble wrapping her head around the fact she’s on Team POTUS. “At first, I thought there was some kind of imposter syndrome I had to face, like ‘Okay, yes, I guess I belong here.’ It was such a joyous, creative, energetic space, and we all felt so right in our characters.”

Her six raucous playmates consist of Vanessa Williams (the First Lady), Julie White (the chief of staff), Suzy Nakamura (the press secretary), Rachel Dratch (a worker-drone secretary) and two low-life late-arrivals: Dancing with the Stars’ Julianne Hough (the President’s pregnant mistress) and Lea DeLaria (his drug-dealing, ultra-butch sister). All are driven to a frenzied fare-thee-well by director Susan Stroman, the high-octane winner of four Tonys for choreography and one for direction.

“It’s the first time I’ve been a part of something where the entire cast is women in a play that is both written and directed by women. I feel so lucky to be in this room filled with powerful women and estrogen. It makes us so excited to walk out on stage every night. I look at the marquee at the Shubert Theater, and I just pinch myself every time I see my name up there with all these remarkable women that I have looked up to for my entire career. It feels very full circle.

“One thing Susan Stroman is so brilliant at is putting the right people in a room together, and that is a huge element of the success of a piece of theater,” continues Cooper. “It’s my first straight play on Broadway, and I believe it’s the first she has directed. Because it’s a farce and has such musical-comedy timing, I think her musical-theater acumen really helped. One of the notes we’d get constantly in rehearsal was to ‘pick up the cues’—not speed up the words themselves but just pick up the cues and the pace of the show itself because it’s a total whirlwind of a play. It’s a train that we just need to stay on. We can’t fall off, or else it would be a total train wreck.”

Scenic designer Beowulf Boritt has provided a turntable set that keeps the White House offices in a dizzy spin, and which can be tricky to board. Recalls Cooper: “It was challenging the first day of tech coming on the set, because we rehearsed in a regular rehearsal space, kinda pretending and walking around in circles. But once you step on a set that is rotating, it adds a whole new element that’s scary, dangerous and thrilling. It’s like another character in our play.”

Prior to marriage, pregnancy, and POTUS, Cooper maintained an unbroken line of musical theater. She was Lucy Brown in The Threepenny Opera, Elphaba (standby) in Wicked, Helen Kuragina in Natasha, Pierre & The Great Comet of 1812, Sandy Cheeks in SpongeBob SquarePants, and Lottie Ames in Mack and Mabel, with a Tony-nominated turn as Julie Nichols, the girlfriend of Tootsie.

Jessica Lange got an Oscar for that role in the Dustin Hoffman movie original, but the 2019 Tony bid caught Cooper completely off-guard. “It just came out of the blue,” she says. “The whole Tony season was so exciting for me. I was really proud that I was able to soak it all in and not worry about the win.”

The latter is her career highlight to date, and no small thanks for that to Robert Hook’s Tony-winning book. “Tootsie is one of the funniest scripts I’ve ever read—and so much fun to do. I’m working on a new show of his right now—a new musical that’s in the works. I feel like if I could work with Robert exclusively for the rest of my life, I’d be happy, and it’d be a great career.”

Which is how a career in the arts works, like a trapeze act from one professional relationship to another. “It has a lot to do with making connections and forging strong relationships and maintaining those relationships,” Cooper contends. “I learned that as a child of artists. My dad is an actor and has been in 16 Broadway shows.” (Her dad, Chuck Cooper, was a 1997 Tony winner for The Life and is a current Tony contender for Trouble in Mind.) “Growing up in the theater, it’s just become ingrained in me. I can say that I’ve been a working actor for more than half of my life.”

“Once we heard about it, everyone was 100 percent gung-ho because we were just so excited about the prospect of it,” Cooper says. “It was magical that all of the logistics came through and we got every single original cast member back as well as the original band. It was in between two Covid waves, so none of us got Covid during the rehearsals or the concert or the filming.”

The 32-year-old actress was 15 and in high school when she was cast as Martha Bessell, a victim of paternal abuse, and she played the part for two years. “Coming back to it—not only as a grown adult but as a mom—has been so surreal and so profound, looking at the text in a completely different way,” she observes. “It was fun re-introducing ourselves to each other. We’ve stayed in touch over the past 15 years, but we all haven’t been in the same room at the same time. It was really special to have that reunion, to see how everyone has grown into themselves and become fully fleshed-out human beings. We were just babies back then, still discovering who we were.”

Now, she knows–or at least she’s on the right track. POTUS will end its run at the Shubert on August 14, and “all I know is that I’m going to be going on vacation with my brand-new family.” 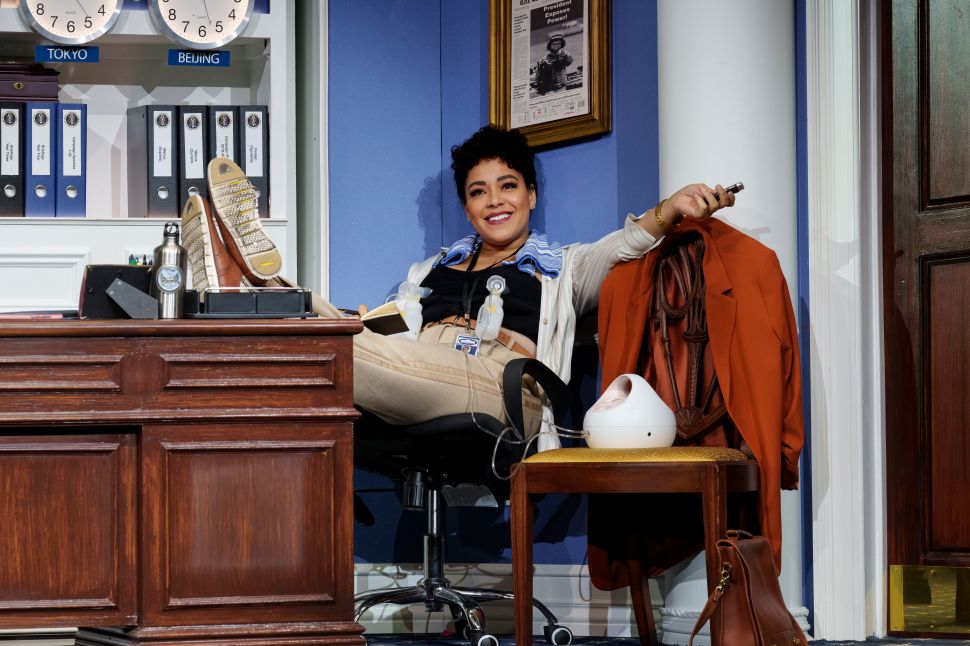