The Brits make the most interesting criminals.  From Jack the Ripper to John Christie, the fiend who murdered scores of girls and sealed them in the walls of his row house at 10 Rillington Place, the creeps and cretins in the files of Scotland Yard have us beat for movie material, ten to one.  The crime committed so cleverly in 1961 by Kempton Bunton, the crotchety old cab driver who remains the only thief in history to successfully steal a work of art from the National Gallery in London, is not so much heinous as it is heroic. Applause-worthy enough, in fact, to inspire the delightful new movie The Duke, with the wonderful British character actor Jim Broadbent as the funny, scheming miscreant who believes crime is justified if it serves a greater purpose, and the great Helen Mirren as his endlessly exasperated wife.  Theirs is a charming, understated and completely enjoyable frolic about how ordinary people can do extraordinary things that seems doubly startling because, while seeming implausible, it also happens to be absolutely true.

Mr. Bunton, a long-time crusader for the rights of senior citizens, was especially incensed by a U.K. government license requirement that forced  the elderly to pay a fee in order to own a TV set.  When he read about the National Gallery’s acquisition of a Goya painting of the Duke of Wellington worth 140,000 pounds, he launched a campaign to get free TV for elderly citizens like himself and hatched a plan to travel from his banal flat in Newcastle, a dreary, working-class northern city, to the world-famous and (supposedly) impenetrable art gallery, steal the Goya, and hold it hostage until the ransom money from the purloined painting pressured the government into making the telly a privilege, free for all.  How he did the deed against impossible odds and almost got away with it forms the most interesting section of the film as it chronicles the heist, the arrest, the trial and the lives of all involved, including his son Jacky (Fionn Whitehead), who helps him hide the priceless work of art in a closet, his elder son Kenny (Jack Bandeira), and Kenny’s brash girlfriend Pammy (Charlotte Spencer), who throws a kink into the mission by finding the masterpiece hidden in the wardrobe and demanding to split the reward.  But the person most affected in myriad ways is Bunton’s grouchy, cynical and long-suffering wife Dorothy, played by the always startling Helen Mirren.  Renowned for playing distinguished royals and women of aristocratic breeding, she is, in this incarnation, a scrubwoman with wrinkles, liver spots and principles, dedicated to keeping her poverty-stricken family solvent—and honest.  Follow her every move and you’ll believe you’re really inside the humble Bunton family residence, watching them eat her meals of cabbage and crusts, served with naturalism and punctuated by the lively, tuneful music hall ditties of the time, unaware that her husband is sending notes to the various newspapers on Fleet Street.  Mr. Broadbent is haughty, awkward and funny at the same time playing a wannabe media star, and Ms. Mirren matches every move in her frustrated attempts to sort out the British class differences.  Example: When Kenny brings home vulgar girlfriend Pammy, Dorothy raises an eyebrow:

“So, Pamela, what is your current domestic situation?”

“It is wrong for the two of you to be living in sin under our roof.”

“What’s gotten into you? You’ll be voting Tory next.”

When his eventual arrest becomes inevitable, the tabloids follow him to court, where his eccentricity charms the press, the prosecutors, the jury and even the judge.  With a logic that makes some kind of cockeyed sense, he makes everyone think twice, including the government  (“Every time an old pensioner is cut off from the British populace, the nation grows smaller in stature,” he says on the witness stand, adding that with the 400,000 pounds they’re paying for the painting of the Duke, they “could pay for 3,500 TV licenses a year and re-connect with all those old-timers”.  “No further questions,” says the defense attorney.

The Duke is the final film of director Roger Michell (Notting Hill), working from a script by Richard Bean and Clive Coleman.  He specialized in civilized films of grace and good humor as only the British can make them, and died a few short weeks after this one was completed.  Sadly, he never saw the finished print.  Neither did the real Kempton Bunton live to see his outlandish plan result in a law making TV free to everyone in England over the age of 75.  Who says crime does not pay? 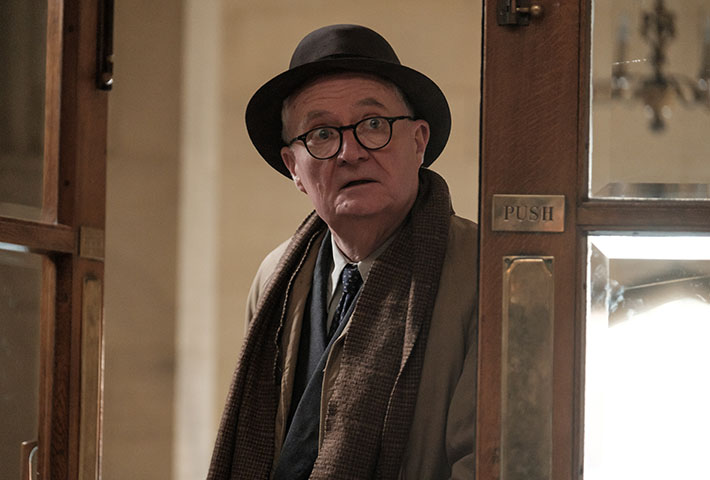