After waiting at the door for a half hour, I walked into the Anna Delvey art opening at the Public Hotel while overhearing a drag queen do impressions of Julia Garner’s interpretation of Delvey on her Netflix series Inventing Anna, only to realize the event was stuffed to the brim with people there who had the same goal I did- find something to write about. At my first familiar face I started giggling to myself when I realized no one was there to just see the art.

The art was nowhere to be found. Plenty of wine, champagne and cocktails such as the “Anna on ICE,” named after where she is currently being detained (Your mileage may vary on how tasteful you find that.), were being slung around. I made polite eye contact with people I sort of know via professional connections, while assuming that anyone wearing an expensive looking bucket hat was there from the art world.

But where was the art? The art would be brought out soon, I was told. By models. Oh, ok. Suddenly, a recording of a collect call came in over the speakers. What felt like every phone in the room shot up to record the message from Anna, who was excited to show us her art that she started sketching during her trial. “I hope that you enjoy the show” the infamous scammer demurred, and Kanye West’s “Flashing Lights” played as models strutted around with the art, with black stockings on their heads over huge sunglasses. It was absurd. It was a party planned by someone who looked at the Paris Hilton of the mid aughts and said “Let’s do that again, but cheekier.”

To a degree, I give it credit. The ostensible reason we were all here, Anna Delvey, a person infamous for doing social sleight of hand so people couldn’t figure out that they were being scammed. Delvey was doing a tongue in cheek bit where the presentation of the art was the same as what got her there in the first place: flash and glitz to distract you from the quality of the art itself. Sure, that’s funny! But when everyone in the room understands the joke, and can pat themselves on the back with the joke, and say “Oh, she’s funny!” Is a joke actually being told? Or are we all just impressed with ourselves for understanding the reference?

I tried to look around for genuine reaction, but I swiftly ran into the same problem as the majority of the attendees: we were all there to review it or report on it. The party funneled out into the lobby outside of the bar, where everyone applauded for the models holding the art. They did a great job holding the art! I turned to the guy next to me and asked if he was there for work or for fun. His reply was “My friend is one of the models. The one who was on Top Model.” “Which one is she?” I politely asked. “The one who was on Top Model.” “Where is she in the lineup of models?” No response. I suppose that was on me for not knowing, but I did ask for information in the hopes of gleaning knowledge. Not a sin, in the grand scheme.  A woman from ABC News asked if I’d like to give an on camera interview about the show. “Sorry, I’m here for Observer.” We both smiled and wished each other luck.

Attendees were then ushered upstairs, into elevators, where you could actually see the art. The art itself is sketches done with art supplies shipped to Anna via her team. Lack of quality tools aside, if I saw the art at a middle school art show, I’d cheerfully say “That 8th grader shows real promise!” The purpose of the show wasn’t the actual art though, and I went in knowing that. The purpose was to extend Anna’s fame, Anna’s infamy, to establish her while she dealt with overstaying her visa for residency in the United States. Anna’s in a catch-22, in a sense. Once she leaves jail, she might not be Anna anymore. She might just be some girl, who was known for one thing or another, and it doesn’t seem like she just wants to be an ordinary person. QR codes were available to buy prints or a percentage of the originals, while everyone took photos of the sketches and politely loitered around two large TV screens showing an iphone screen waiting to accept a call on a video conferencing app.

I turned to the friend I brought with me, who said it was a miracle they didn’t rip up her drawings in jail. We paused for a moment on that thought, which was blessedly broken by another reporter, Abigail Covington from Esquire, facetiming her mother yelling “HEY I’M AT A STUPID FUCKING MEDIA PARTY WITH A BUNCH OF STUPID FUCKIN MODELS.” The first real grin of my night spread across my face, relieved to see another person loudly, cheerfully acknowledging how silly the whole thing was. I immediately introduced myself, so happy to meet someone else with my mindset, and felt kinship in our wants to just roll our eyes til they fell out of our heads. I’m not against art. I’m not against silliness. I’m not against tongue in cheek kayfabe- I am a noted and proud pro wrestling fan, which combines all of those things to varying degrees. An underlying cynicism was in the room, and I was struggling to figure out if the cynic was me or the people who planned the thing. In all likelihood, it was both.

Niki Takesh, lovely New York socialite and co-host of the podcast Forbidden Fruits, then FaceTimed Anna, with Anna showing off her yellow jumpsuit from an ICE facility, thanking everyone for attending, and answering questions about her art process while lone “FREE ANNA” yelps echoed around the packed room. Niki was one of a few people in the room who actually had spoken to Anna before that evening, and they had a familiarity with each other. I made sure I’d seen all of the art, grabbed my bags, and asked my plus one if we wanted to go get food. We decided on a fried chicken place down the block. On our walk there, we realized Niki and her friend were behind us, when Niki yelled “Who the FUCK was anyone THERE? It was all media people,” and I thought “Great question, Niki.” 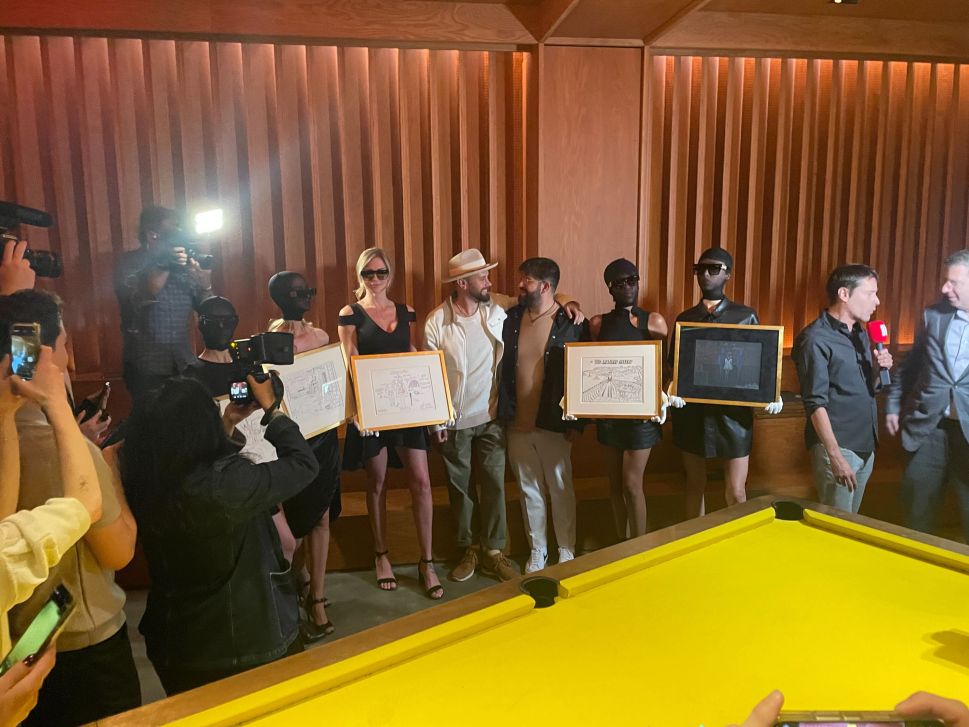