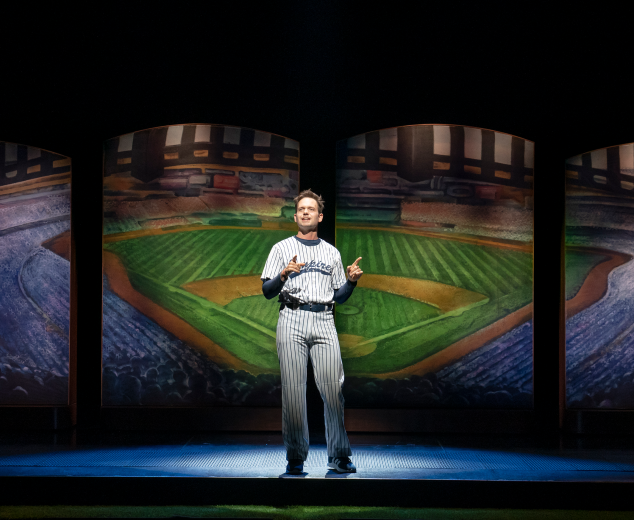 That’s some gamut Patrick J. Adams is running—from Suits to birthday suits. After seven years of illegally wheeling and dealing as a brilliant (but bogus) law associate on the USA Network series, he is slightly amazed to find himself baring all on Broadway in Richard Greenberg’s Take Me Out.

In fact, he’s just plain amazed to find himself on Broadway at all, although that’s the dream that has run around in his head since he was 15. To this end, the first school the Torontonian applied to was NYU’s acting program. When that didn’t pan out, he tried the other coast, was accepted at the USC School of Dramatic Arts in Los Angeles, and thus amassed 55 film or TV credits before Broadway came into focus for him. His stage debut came in 2005 when he was 23 and an intern at L.A.’s Theater Center and was cast as the son in Edward Albee’s The Goat, or Who Is Sylvia? at the Mark Taper Forum.

“I desperately wanted to audition for The Goat, but they wouldn’t let me,” he recalls. “They said, ‘You’re an intern.’ When they couldn’t find the right kid, they let me audition. I just wanted to prove them wrong, that they should see me—I’m good enough to be seen—and, lo and behold, I got the part. It was my first experience being on a professional stage. I remember very little about it because I was just holding on for dear life. Talk about pure terror!”

He adds, “Fear is a big part of my life—specifically, in my career. It’s a dance that I do, running away from it and running toward it. This really hit me the last thing I did on stage.”

He is referring to The Last Match,  a play he and his wife Troian Bellisario (of TV’s Pretty Little Liars) were doing in San Diego in 2016, when he went up on a line. “It’s happened hundreds of times before,” he says. “But this time it just hit my brain the wrong way, and I went into pure panic, fight-or-flight mode on stage.” The experience was so uncomfortable that six years went by with Adams working in TV and film and not thinking about theater. “That time just sat over me like a specter, saying ‘Don’t forget it.’”

There are easier ways for a shy guy with advanced stage fright to make his Broadway debut than Take Me Out, which has the added hurdle of full-frontal nudity.

Take Me Out, of course, refers to Jack Norworth and Albert Von Tilzer’s 1908 Tin Pan Alley ditty “Take Me Out to the Ballgame”—a song, said sportscaster Harry Caray, “that reflects the charisma of baseball.” In Greenberg’s 2002 play it referred to a beloved biracial major league baseball player coming out of the closet—a situation that causes uncomfortable, if not downright taut, times in the locker-room showers. Greenberg goes for a third meaning as his play ponders the possibility that a murder has been committed. That’s a three-base hit right there. Not answering the question, letting the viewer decide, makes it a homer. In 2003, it was a Pulitzer finalist and the Best Play Tony winner.

The Svengali who convinced Adams he could make the leap back into theater was Scott Ellis. He directs this revival and was adamant that Adams should play Kippy Sunderstrom, who narrates the story, plays shortstop for the New York Empires, and is described as “the most intelligent man in major league baseball.”

Ellis trekked to Florida where Adams was filming the Disney+ TV miniseries of Tom Wolfe’s The Right Stuff (he played John Glenn), and over breakfast one morning, they talked theater shop. “I was very up-front with him about my anxiety,” Adams admits. “I said, ‘I’m so grateful that you want me for this, but I had this terrible time and I just don’t know if I can do it.’ In a lot of ways, that man saved this part of my career because he met me with such kindness. He said, ‘I got you. You’re going to be great. You’re going to be fine. You know you love to do this. If you don’t do it, you’re never going to do it again. People start saying no to everything.’ So I said, ‘Okay. I’m going to trust you.’”

The direct, even-handed performance that Ellis drew from Adams won the actor a Theater World Award and a Best Actor nomination from the Outer Critics Circle. “It’s really to Scott’s credit. He walked me through it. He’s been so supportive and encouraging. It hasn’t been easy getting back on that horse. There has been a lot of terror, a lot of discomfort, but the blessing of the pandemic is that I had two years to do a lot of work on myself to get to the bottom of my panic.”

When rehearsals finally resumed, the nudity issue had not evaporated, but it weighed a lot less on the actor’s psyche. “It’s a weird thing how nudity is almost so scary that it’s not. I was more panicked about breaking down the fourth wall and talking directly to the audience than I was about the nudity. I think I put the nudity in a different part of my brain and left it there. I was like ‘Okay, we’ll just deal with that when we get to it.’ I’m not somebody who likes to be nude in front of strangers—that’s not on my bucket list—so I kept putting it off and putting it off until the day came when we all were going to get naked. There’s something about how beautiful that scene is, how much I love it terms of the writing, that it in no way superseded the terror of doing it.”

If it’s any consolation, the Hayes Theater where Take Me Out is playing till June 12 is the smallest house on Broadway, with only 587 seats. Of course, that’s times eight performances a week, and most seats are filled. Adams couldn’t be happier and hopes to do more plays here—fully clothed.

“I’m completely over the moon with how it’s going,” he trills. “I’ve done a fair amount of theater in my life, but I’ve never done theater in New York, and I’m just blown away by audiences in this town. They’re so smart. They listen. They care. They’re supportive. It’s a very unique and wonderful experience to be getting to perform this play for such a great group every night.” 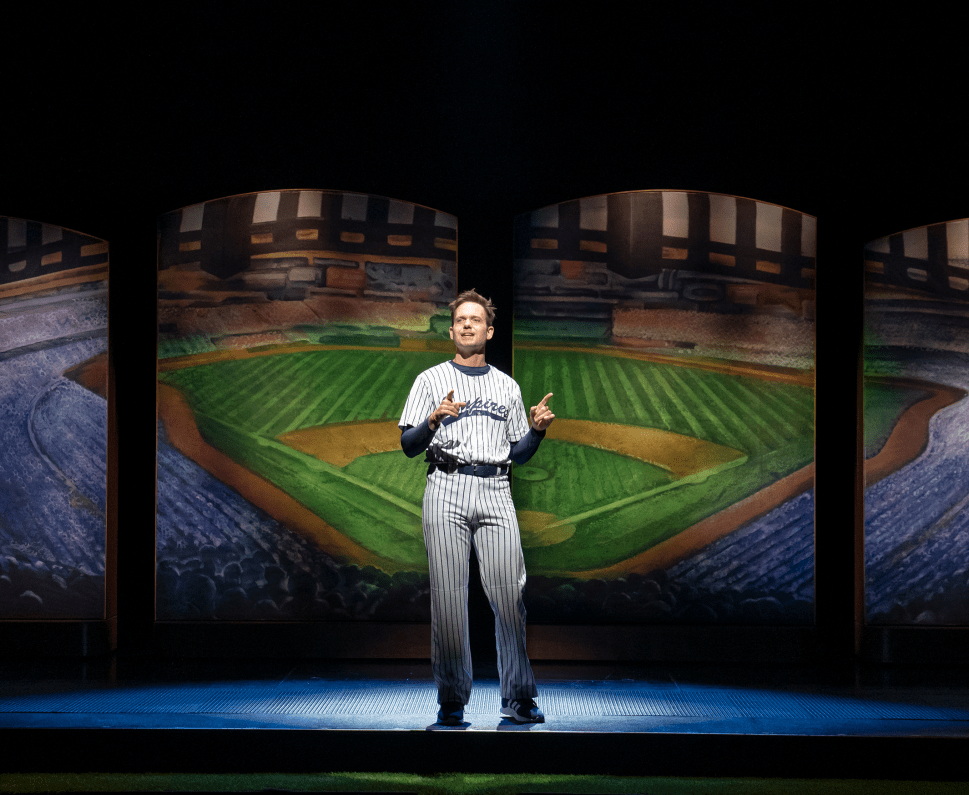