At the end of Star Trek: Picard’s first season, a temporarily deceased Jean-Luc Picard finds himself inside a computer simulation that allows him one final visit with his dear friend Data, who died twenty years prior. Picard’s grief over the loss of Data is one of the driving forces behind the ten-episode arc, and while the path to their brief reunion was rocky, the payoff was genuinely powerful. I remember watching the projection of Data’s consciousness lay himself down to his final rest, wiping tears from my eyes, and thinking: “I wish the rest of the show had been nearly this good.” Now, as Season Two comes to a close in remarkably similar fashion—with Picard seeing off his old frienemy Q to the great beyond—I find myself saying the same thing, only with much more frustration in my voice. “Farewell” is a jagged, underwhelming closing chapter that, even in its best moments, highlights all of Star Trek: Picard’s most damning flaws.

Let’s start with what works: the scene in which Picard and Q finally sit down to chat in the solarium of Chateau Picard is a touching coda to their decades-long relationship. Q is a multifaceted character who has served various purposes across his appearances in the Star Trek universe, but he is most interesting when acting out of a personal investment in Picard, almost like a parent. (Data probably puts it best in The Next Generation finale “All Good Things…” when he likens Q’s attachment for Picard to “that of a master and his beloved pet.”) In “Farewell,” when Picard asks Q “Why me?” it’s as if he expects Q to explain that he has kept watch over Picard because of some great destiny that Q has needed to protect, and that he has arranged for Picard to make peace with his mother’s death in order to avoid some sort of massive space calamity in the future. Q dismisses this idea in favor of a much more moving answer: It’s love, simple as that. When Q discovers that he’s going to die alone, he decides to use the time he has left to ensure that the same doesn’t happen to Picard. He cares what happens to him and he wants to do something kind for him on his way out of this reality.

“Must it always have galactic import?” asks Q. “Universal stakes? Celestial upheaval? Isn’t one life enough? You ask me why it matters: It matters to me. You matter to me.” It’s a powerful exchange, well-written in a voice that only John de Lancie could instill with the proper balance of warmth and gravitas. It ties into the lessons that Picard has needed to learn throughout the entire season and heavily underlined during the first act of this episode, that these personal relationships are everything, that they’re worth taking risks for, and that his need to atone for the one life he couldn’t save has kept him from building one of his own. Not everything needs to be about saving the galaxy.

But, as well as this scene lands, its emotional punch is still greatly dependent on a viewer’s existing investment in the relationship at its heart, born out of years of development on a different television stoked by decades of fan nostalgia. Picard and Data’s farewell from the first season may well press your emotional buttons even if you are the rare viewer for whom this series is your first Star Trek; this one surely will not. And, for the rest of the episode, it’s crystal clear just how little investment or confidence the storytellers behind Star Trek: Picard have in any character or concept not imported from the franchise’s history.

Let’s jump back to the first third of the episode and the underwhelming conclusion to the Europa Mission storyline. In order to prevent the dark future that they witnessed earlier in the season, Picard and company must ensure that his ancestor, astronaut Renée Picard, successfully launches into space aboard NASA’s mission. Their adversary is Dr. Adam Soong, who uses his status as a super-rich donor to get access to the launch site and plans to assassinate Renée before she boards the rocket. In order to stop him, Tallinn sneaks inside, disguises herself as Renée, and gets killed in her place, but not before finally revealing existence to the woman she’s protected from afar since childhood. This turn of events has thematic resonance, as Picard must both accept that Tallinn, like his mother, is responsible for her own life, and that love is worth all of the risks that come with it. Unfortunately, it’s just not terribly interesting to watch. There’s no real sense of danger, the performances never rise above adequate, and the dialogue seems written as if terribly afraid that the audience might not get the point. Meanwhile, Raffi, Rios, and Seven are busy trying to prevent Soong’s drones from destroying Renée’s spacecraft, which turns out to make for even less thrilling television.

With the danger to the timeline eliminated, there’s a short interlude wrapping up the storylines of Dr. Soong and his genetically-engineered daughter, Kore. And while the defeated Dr. Soong digging into his desk drawer to find a file folder marked “Project: Khan” is surely worth a roll of the eyes, his ties to the coming Eugenics Wars have been apparent for weeks, so it doesn’t come out of nowhere. It’s merely clumsy and obvious. On the other hand, Kore’s story, which ends with her receiving a surprise job offer from Wesley Crusher (Wil Wheaton). Absent from Trek since his ascension to a higher plane at the end of The Next Generation, Wesley now represents the Travelers, guardians of space and time and employers of Supervisors like the late Tallinn. This out-of-nowhere attempt to score a cheap pop from TNG fans is awkward enough on paper, but the scene itself is a mess, in large part due to Wil Wheaton’s performance. The dialogue written for Wesley indicates that he’s done some growing up, but it still contains hints of his youthful pluck, which Wheaton seems intent on burying. He replaces it with a softer, tamped-down version of the misty-eyed dad energy that he embodies as the host of the official weekly aftershow for the various Star Trek permutations, The Ready Room, and the result is inadvertently creepy. If a stranger walked up to you in a park and spoke to you in this tone of voice while maintaining this level of intense eye contact, you would not follow him to his spaceship.

After Picard and Q’s heart to heart, the dying space god offers to use the last of his remaining energy to return Jean-Luc, Raffi, Seven, and Rios to the point in time from which they were yanked back in the season premiere. Rios, having found love and a sense of belonging with Teresa and Ricardo, elects to stay behind. While this feels like a natural conclusion to this season’s romance, it also feels like the storytellers waving a white flag and admitting that they don’t really care very much about this character. When Rios says, “I never fit, you know? Nothing stuck,” it’s hard not to read this as metatext. Between his departure and the news that Alison Pill will not appear in the third and final season of Picard, it seems as if the producers are cutting as many new characters as they can to make room in the payroll for the entire Next Generation cast. Michelle Hurd and Jeri Ryan will definitely be returning, but with six of Picard’s old Enterprise crew coming aboard, they’re likely to have even less room to grow and develop than they had this year.

With Picard’s arms around him, Q sends the rest of the party home and himself to oblivion, a touching emotional moment to which the remainder of the episode does not measure. Awakening aboard the USS Stargazer under attack by the mysterious hooded Borg Queen, Picard, Seven, and Raffi avoid destruction by recognizing that their alien intruder is actually Dr. Agnes Jurati after 400 years of Borg evolution. Rather than destroy each other, the Borg and Starfleet team up to build a shield wall and protect their entire quadrant of space from a sudden cosmic eruption. This threat is introduced and dismissed so quickly that neither danger nor victory truly registers, and it comes mere minutes after Q mocks the idea of this story needing galactic-level stakes. The origins of this calamity, a mysterious transwarp corridor, is apparently something saved for exploration next season.

The brief final scene in which Picard comes home to the chateau and asks Laris for a second chance at courtship doesn’t have much substance, but in fairness, it doesn’t need much. This story hasn’t been about Laris, or her and Picard’s relationship in particular. The goal hasn’t been to see them get together, it’s been to see Picard grow comfortable enough with the idea to make an honest effort. Had the rest of the episode not been such a mess, this might have made me feel something, but by this point, I must admit a complete exhaustion of my goodwill.

Weekly serialized television is a high-risk, high-reward endeavor. When a storyteller invites an audience to maintain a long-term relationship with a story, they’re also asking for their patience, for a bit of faith that the messy details of an hours-long tale will come together into a grand tapestry. Reward that faith with a meaningful, satisfying ending, and the audience might be willing to forgive the flaws they noticed along the way; fail to do so, and the flaws will be all they see. The second season of Star Trek: Picard has asked for a lot of my patience and at times I’ve been happy to give it, but its final chapter is such an underwhelming mess that it’s hard to think of the season as a whole as anything but just that. 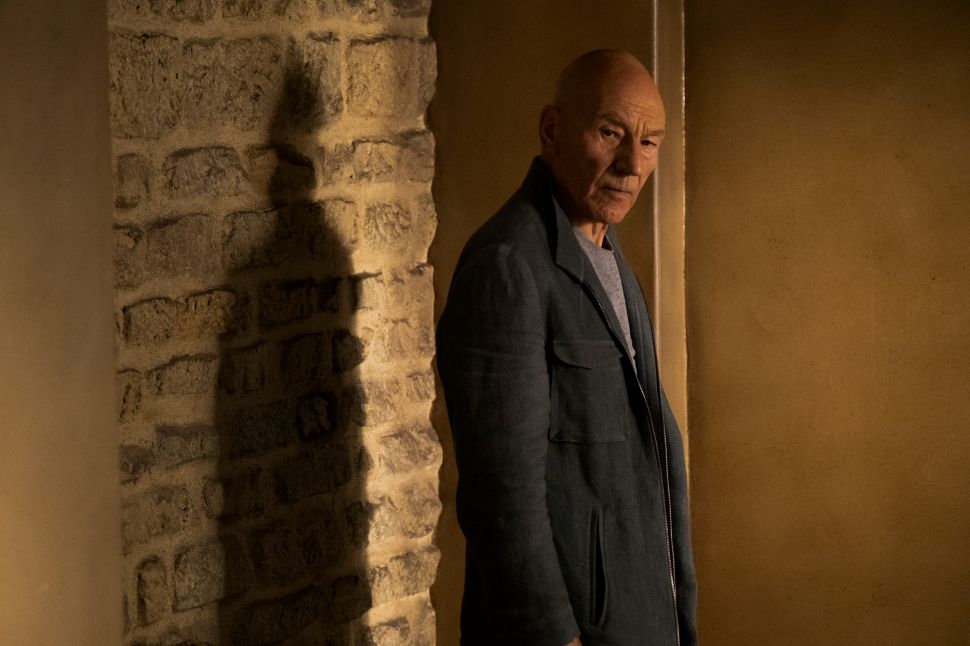