In Aldona (2013), now streaming on e-flux, Lithuanian-born visual artist and filmmaker Emilija Škarnulytė questions visibility and weathering, in a delicate portrait of her grandmother’s tactile reawakening of bygone times.

Living in Druskininkai, Lithuania, not far from the borders of Poland and Belarus, Aldona mysteriously lost her vision after the 1986 Chernobyl power plant explosion. The short documentary narrates the interconnection of a physical and emotional fog as the old woman lives—or survives, we wonder—in a space that is anchored in neither present nor past.

An orange-hued moon descends; it’s the start of a new day. We first see Aldona washing her hands with soap and splashing her face with in her garden as she goes about her daily chores. Aldona’s material conditions are modest. Her wooden country house has no running . She wears an apron over a yellow pastel shirt and appears frail.

In a moving scene, she visits Grūtas Park, a socialist-realist sculpture graveyard garden not far from her hometown. There, among the monumental relics of past Soviet heroes, Aldona tries to recognize and remember the silhouettes of Stalin, Lenin, and fallen soldiers from the Great Patriotic War. She does this through careful touch, letting her hands warm the stone and describe to her other faded senses these familiar shapes. She then retreats to her house, listening to the voice of a Russian-speaking man on the radio narrating a love story.

Aldona first conveys the atmosphere of a  post-Soviet aftertime which one can encounter in Nobel Prize laureate Svetlana Alexievich’s Secondhand Time: The Last of the Soviets (2016). In many ways, Aldona is a character that could have featured in one of Alexievich’s chapters. She embodies both the “consolation of apocalypse” and the “charms of emptiness” that the Belarussian author captures in her alternative oral histories of the USSR’s decline and disintegration.

Yet Aldona is first a visual and haptic testimony. Škarnulytė plays with contrast to underscore a duality in tones and voices. Her camera shifts from night to day and lingers in the moving shadows of swaying tree branches. We leave the dimness of thick forest fog to embrace the ebullient allures of a bright garden. Silence is broken by an austere radio program. And despite these oppositions, Škarnulytė suggests uncanny similarities, such as in the cracked texture of the Soviet sculptures and her grandmother’s skin.

Small and big history collide in Aldona’s frame. She’s family to Škarnulytė and she’s much more—a living memory and a symbol. The old woman leaves her house on a dirt trail to Grūtas Park, which evokes a mnemonic device, the incarnation of the sinuous paths we often involuntarily take to meet things that refuse to stay quiet. Aldona walks ahead.

Aldona, who we assume to be a widower from her wedding band, finds companionship in her radio and religious listening. It’s easy to imagine her indulging in this regular habit, as a moment that crowns an afternoon, that sets a rhythm.

Memory can be organic and ritualistic, such as when she peels apples. We first hear the woman’s voice when she stands up from her chair to frugally dispose of the peels, “so this will be fertilizer now. I need to put it under a tree.” Waste nurtures; leftovers feed. They contribute to a soil and mental images like a rekindled fire.

The film discusses loss at large—of senses, identity, and history. It’s hard to dissociate these as Aldona’s blindness, disorientation, and bent-over body converge to resurrect the legacies of the USSR. Lithuania was the first republic to break away from the Soviet Union, in March 1990, after annexation in 1940 and years of armed resistance against Soviet troops. When Aldona’s radio program churns out “I’ve protected you from the wolves and bears and have domesticated them to serve you,” fiction and its narrator carry the resonances of a double-entendre, as a lesson from the past (one can’t domesticate freedom) and, in light of today’s war in Ukraine, a warning (serving specific interests).

“The nerves in her eyes were poisoned,” the end credits of the film tell us about Aldona’s fate. Her condition coincided with the Chernobyl power plant explosion and doctors think the two events are related. In Aldona’s contamination and struggle for autonomy, we project Lithuania’s past and affirmation towards independence.

Grūtas Park is an emblem of such vicissitudes. Lenin and other Soviet-era statues were quickly toppled and dismantled in the former-USSR following its collapse. What to do with these imposing structures that hold so much significance? Russia’s Park of Fallen Heroes in Moscow presents over 700 of them on display, with more in storage. There’s also an aptly named Memento Park in Budapest, Hungary. Public monuments are inherently political and besides crystallizing aesthetic eye-sores for some, they crucially keep old wounds from healing when related to oppression and occupation.

Scottish author Cal Flynn writes of the “green of time” in Islands of Abandonment (2021) describing contested landscapes which ultimately surrender to nature. Flynn visited Chernobyl’s Dead Zone, now an eerie site where invisible danger and diverse fauna meet to form a uniquely reborn ecosystem, which she ascribes as a sign of endurance and transience. Yet for Aldona, who won’t recover her eyesight nor her younger days, the present is an effort that needs to be negotiated. Her gaze, affected by a toxic substance, is one of a witness and survivor.

Škarnulytė engages with forgotten landscapes, mythologies, future archaeology and space in her artistic work, including in her most recent projects such as Burial (2022), which invites to visit a decommissioned power plant in Lithuania, Eternal Return (2021) which posits the infinity and ecological nature of ruins, and Sirenomelia (2021), an experimental book in which the artist reimagines herself as a siren swimming in Nordic NATO facilities. Škarnulytė won a Future Generation Art Prize (2019). Her works have appeared in the XXII Triennale di Milano (2019), the Baltic Pavilion at the Venice Biennale of Architecture (2018), in a solo exhibition at Tate Modern (2021), and have been acquired by the Centre Pompidou.

“I want to give time and space for the viewer to walk into these landscapes and explore. And to raise questions instead of giving answers. For me, it is important to see contemporary, scientific structures distanced and to see them already as ruins. I am not trying to praise the scientific process, but rather to question it and re/contextualize this epoch within mythology. I propose a new geo-strata created by visualizing current geopolitical actions,” Škarnulytė said in an interview on her approach to location and the politics of place.

Aldona haunts in its depiction of an out-of-time and out-of-space post-human disquietude and intimate grief. Škarnulytė’s ambition to marry memory and imagery confirms, as Frances A. Yates did in 1966, that memory is, fundamentally, an art as much as a sediment and a holographic reckoning of radical potentiality. 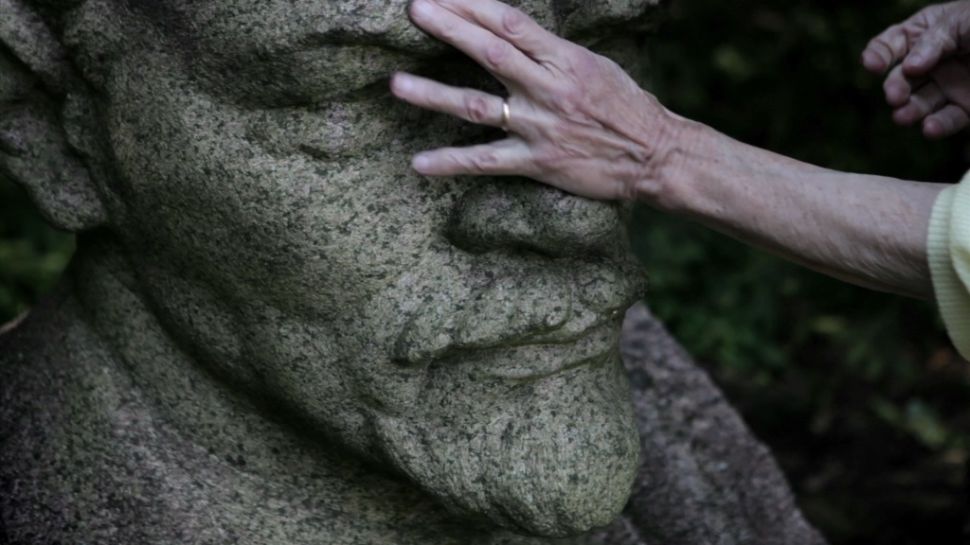