Shakespeare’s The Tragedy of Hamlet is quite a carnal text, marbled with Pepto Bismol–levels of carrion, decay, and digestion. Take the title prince’s “too, too solid flesh” that he wishes would melt away; funeral baked meats coldly feed a royal wedding; and who could forget “how a king may go a progress through the guts of a beggar.” Also, the state? Rotten. Ingenious playwright James Ijames goes further, hacking skin and muscle off the classic, preserving some bones, and slow-cooking a savory, lip-smacking gumbo of the remains. Fat Ham is a butchering, but a loving and filling one; just unbutton your jeans and enjoy it.

Gone is gloomy Denmark, drafty Elsinore and numerous pasty Danes. Instead we’re at a backyard barbecue on a sunny day in suburban North Carolina or thereabouts. A wedding took place today, and the son of the bride, Juicy (Marcel Spears), is sullenly putting up party decorations as his stoner bud, Tio (Chris Herbie Holland as Horatio, or a piece of him), giggles at porn on his phone. Plus-size, sorta closeted, and pissed that his mom married his uncle a week after his dad’s death in prison (shanked in the neck), Juicy longs to return to school—on his laptop (U. of Phoenix). But the vengeful ghost of Pap (Billy Eugene Jones), darting around the yard with a checkered tablecloth on his head, has bloodier ideas. See, Pap’s brother, Rev (Jones again), murdered him to gain control of the family BBQ restaurant. Ay, there’s the (spice) rub (Juicy’s pun, not mine).

Once you get past the sitcommy outlines of the project, the uniqueness of Ijames’s voice and his critique of genre becomes more apparent and pleasurable. He translates the domestic and political conflict of Hamlet to the modern South where he grew up. The resulting queer, Black, middle-class lens is inherently irreverent and a goof, but also liberating. We lose a few grand speeches, but in return, we get big laughs and a moral vision a bit more palatable than ole Shakes’s “women are whores, old men are pathetic, and then you die.”

In a 2021 interview with the Southern Review of Books, Ijames expressed a longtime love of Hamlet, but also alarm at its lack of emotional intelligence. “Hamlet is legitimately grieving,” the author noted of the character’s first scene in the Danish court. “[I]t’s an opportunity for Gertrude and Claudius to make it better and they just choose not to…. either one of those two humans could have done something differently and the rest of the play would have been different.” What happens when you apply empathy, commonsense, and smoked ribs to a murder-incest regicide plot? Tragedy converts into comedy.

So Fat Ham’s Gertrude, Tedra (Nikki Crawford), while hot-to-trot and quick to spend her son’s tuition money renovating the bathroom, appeals to pensive, alienated Juicy in this plaintive exchange whose counterpart won’t find in the closet scene:

JUICY: Don’t you want to know what’s it’s like to be alone with your own thoughts?

TEDRA: Listen baby, I went from my Daddy’s house to my husband’s house. I ain’t never been alone. I need noise. Commotion makes me happy.

JUICY: I want you to be happy momma.

Ijames endows each character with such grace notes of interiority or dignity, wrestling with the tragic script. Rev, although a bully and braggart, is imbued by Jones with a swaggering, youthful energy that’s infectious and disarmingly sexy. The Ophelia stand-in, Opal (Adrianna Mitchell), is a frustrated lesbian forced by her churchy mother, Polonius-like Rabby (Benja Kay Thomas) to wear a dress, when all she really wants is a life of action. Rabby’s other child, Larry (Calvin Leon Smith), is a ramrod-straight Marine who struggles to hide his true sexuality, his “soft” nature, to borrow the play’s queer code. If you ever wanted to see the melancholy Dane and Laertes come this close to making out, Fat Ham is the slashfic devoutly to be wished.

Ijames trained as an actor and spent years performing while he developed his craft, and his writing has an aura of wistful self-discovery that is catnip to actors: moments of self-articulation, intimations of hidden depths or spasms of despair. “I feel like I’m just on the edge of figuring something out,” Opal confides in Juicy. “Maybe we are like superhuman and like boom…we on the verge of gaining our powers but there something that’s like holding us back.” Even Rev’s comically villainous end carries a note of pathos; he dies as much from ignorant homophobia as from a clod of brisket lodged in his windpipe.

In a similar fashion, Ijames applies the Heimlich to Hamlet and out pops a comedy from the gorge of tragedy. Saheem Ali directs with a customary sure hand, with the lunacy and looseness reaching a high point when the karaoke machine comes out and Tedra grinds on Rev’s lap while singing Crystal Waters’ “100% Pure Love.” Spears stops the show dead in its tracks with a wrenching cover of Radiohead’s “Creep,” which is now officially—and you will not convince me otherwise—Hamlet canon.

I first saw this Pulitzer Prize winner last spring as a video capture, shot at a house in Virginia by Philadelphia’s Wilma Theater. Director Morgan Green and a wonderful “Covid bubble” cast brought the saucy, unpredictable tale to vibrant life, and it was one of best things I saw all lockdown. Watching Fat Ham live at the Public Theater (co-produced by the National Black Theatre) with an equally spirited ensemble, I felt a similar reacquaintance with hope. Larry emerged in full drag and a campy, joyful dance party ended the show, and I started tearing up. Tragedy is supposed to induce catharsis, a purgation of the emotions (especially pity and fear). But comedy is just as purifying. As Juicy and his extended family celebrate their lives, their flesh, and their food, they reject the silence and embrace the noise. 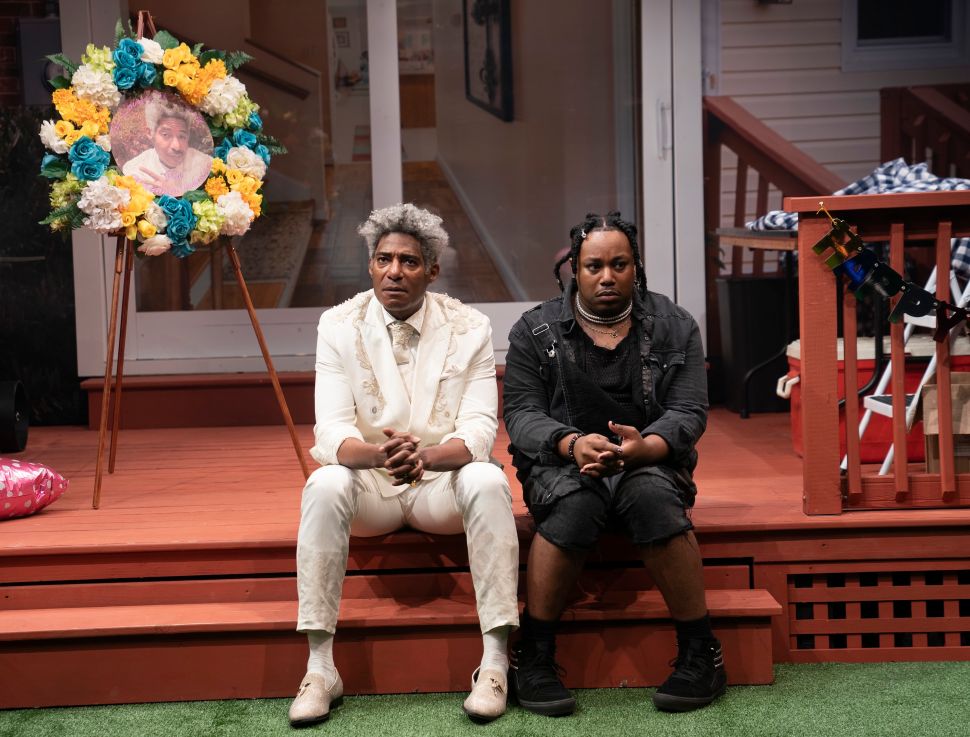