We live in a time of so many good-to-great streaming series, and playwrights who write for them, it seems churlish to wish a new drama upon another medium. And yet Anchuli Felicia King’s overstuffed, schematic play of ideas could provide a writers room with enough material (IT ethics, the fog of translation, international law, and toxic siblings) for eight episodes on Hulu. Whether it would get a second season is another question.

The spine of Golden Shield, which bounces between 2006 and ’16, is a courtroom drama in which Chinese-American lawyer Julie Chen (an elegant Cindy Cheung) sues Marshall McLaren (Max Gordon Moore, appropriately slimy), the head of a fictional American tech company called ONYS, on behalf of eight Chinese political dissidents. Chen alleges that McLaren and his company are liable to a little-known statute that gives federal courts jurisdiction to hear lawsuits filed by non-U.S. citizens for torts committed in violation of international law. McLaren and ONYS essentially helped the Chinese government make state surveillance of the internet more efficient, leading to greater censorship and persecution. One citizen caught up in the brutal machinery of the state is Professor Li Dao (Michael C. Liu), imprisoned and tortured for five years for showing students how to circumvent the “Great Firewall.” (The premise was inspired by real court cases, such as one involving Yahoo.)

As if this legal and tech stuff weren’t enough to process, King complicates her story by giving Julie an emotionally volatile sister, Eva (Ruibo Qian), who hides her side hustle as a sex worker; Julie disapproves of her younger sibling enough already. Both Julie and Eva are deeply damaged from an abusive mother (dead) and an absent father (ignored), although the exact nature of the mother’s crimes are never explained; she’s variously described as a “tyrant” and a “monster.” At her most righteous and incensed, the bullying and rage-prone Julie no doubt becomes her mom, which drives Eva away. Eva spent more of her youth in China than Julie, and so is fluent in Mandarin. Julie hires Eva to translate during a research trip to Beijing.

The one distinctly theatrical device King builds in is a character called The Translator (Fang Du, adorable), a perky fellow who translates (there are no projected supertitles) to us across the fourth wall. Often, our cheerful narrator explains the subtext of dialogue or action—which is sometimes poignant, other times superfluous. He muses on matters linguistic. Pointing out that in Mandarin “the goal of the action is often inbuilt in the verb,” he adds, “[t]he Mandarin speaker thinks circularly, in a loop, while the English speaker thinks linearly, in a line.” How this reductive notion relates to King’s dramaturgy is unclear, but probably explains why Eva abandons her Westernized sister, while in China, Li’s estranged wife (Kristen Hung) comes back to him. This is a play where the main characters are almost all unlikeable and the nicer, supporting characters simply dull.

As I said, such a corporate-legal-domestic-bicultural-political sandwich would be better unpacked and dramatized in an episodic, visual medium. That’s where clunky, congested dialogue (forced profanity, Mametty bro banter) might be smoothed out, and international locales presented vividly, not just wheeled into the neutral space of taupe perforated walls arranged by designer dots. There is a nested niche of naturalism in the center of the set, depicting Li and his wife’s living room, which suggests the rest of the play takes place in, what, exactly? A hotel lobby? A physical manifestation of the internet, with holes representing nodes? Still, Jeanette Oi-Suk Yew’s expressive lighting carves out contrasts between natural light and harsh eruptions of red and blue, especially when Li leaves home to be grabbed by the police. Savvy director May Adrales, foot on the gas and in command of a strong ensemble, provides a luminous shield (if you will) for a piece whose grinding gears need maximum cover. 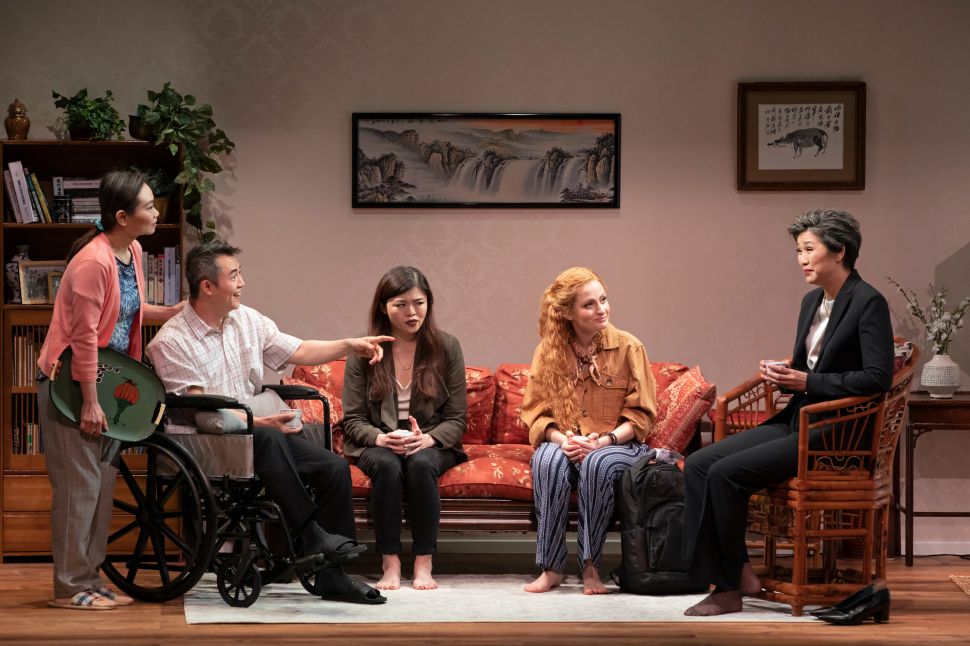