After getting FFS, I knew my doctors wanted me to have a Cinderella moment and recognize my own beauty.  But really what I needed most was someone to sit next to me and hold me in their arms. I spent a few weeks in a depression fog as friends asked me if I felt good. I said of course I felt good, of course I didn’t regret it, but I didn’t want the burden of feeling good. For a week I felt so depressed I cried for hours at a time listening to the same Phoebe Bridgers song on repeat like every other sad fake bisexual. I knew it would pass, but once the aftercare group went home, I felt incredibly fragile. I’d gone through something without a partner or immediate familial support. It gets better. For some. Sometimes. In some ways.

Side Affects: On Being Trans and Feeling Bad is scholar Hil Malatino’s third book in four years, an incredible feat for any writer. Side Affects focuses on the negative affects that animate trans life: future fatigue, numbness, envy, anger, and burnout. In these negative affects, Malatino hopes we can find a way through without the burden of turning ourselves into positivity machines that vacillate between gender euphoria and dysphoria. The images of trans people that populate the world are “trans-positive after-school special” or trauma porn. As Malatino puts it: “the genres of trans living are whittled down to just a few: hero worship, demonology, victimology.”

Malatino pushes back on the individualistic notion that trans people can be liberated through feeling good. Gender euphoria is never enough to confront the structural world around us. As rights are stripped away in the US, we are reminded that any rights we have are conditional, contractual, and fragile. We cannot just “grab a self-help book and learn how to care less. Forget structural transformation. Forget solidarity.”

Besides, Malatino says, “I definitely can’t pretend that the cultivation of happiness makes any sense at all as a political aim.”

Trans people are problems, ciphers for cis people to solve or eliminate. We remind people of their inability to orient towards new beginnings, towards pleasure, towards a break. Malatino references Sara Ahmed’s idea of the killjoy: “We trouble others, we make trouble for others.”

This gives rise to the affects that Malatino explores. Anger is when “we break to keep on living.” These fractius moments, as Malatino explores in the prison letters of CeCe McDonald, can propel us forward. Malatino argues anger is not just repressed sorrow but its own emotion, one brimming with potential. Envy on the other hand can be a sticky knot that shows us something about injustice, lust, or strategies for survival. Malatino gathers a great cloud of witnesses to support his claims: Lauren Berlant, Torrey Peters, Kai Cheng Thom, Casey Plett, Lou Sullivan, Noah Zazanis, and Paul Preciado among many others. His approach is cogent and clear whenever using narrative or theoretical texts, his writing doesn’t get as bogged down as other academics.

In “Future Fatigue,” Malatino works through the exhaustion of optimism. Building on the work of Lauren Berlant and Laura Horak, Malatino questions the Christian temporal space of “hormone time.” What if envisioning a certain future is burdensome, heavy, demoralizing, or even impossible? Instead, Malatino uses trans visionary fiction to explore the possibility of leaning into uncertain futures. The antidote he proposes is T4T love. “It is cynical, skeptical; t4t is set up to fail, about aiming high and taking what one can get.” I admit, I would be curious to see Malatino explore the negative ramificationsthat can result from T4T romance a bit more.

“Beyond Burnout,” part of which appeared in Malatino’s previous book Trans Care, is a stand-out chapter exploring how trans people perpetually live in a state beyond dysfunction. As Malatino states in his previous book Trans Care, “Forgetting: another trans art of survival.” Burnout seems to me inseparable from “Fuck Feelings” where Malatino thinks through the trans skill of numbing out in order to avoid negative feelings. Malatino cites alcoholism in Little Fish and smoking in the documentary Southern Comfort. I and many trans women I know have been described as “flat,” “inscrutable,” “hard to read,” or “recalcitrant.” Yes and then some.

Writing too is its own form of numbing out, creating a canvas where everything can be selected, the world put into order, its shape rearranged so feelings can become larger and smaller at will. The idea that writing is a coping strategy for self-soothing and numbing is as beautiful as it is disturbing. “You don’t lose yourself in writing, but you strategically minimize the world frame until it is constituted primarily, if not exclusively, by the paper upon which you write.” The recursive urge is shaped by a position of lack.

The final chapter of the book rejects a neoliberal white trans framing of healing that centers the individual above all else. Exploring the history of LSD, eugenics, and white trans spirituality, Malatino argues against this racialized appropriation that creates an imagined trans lineage. Malatino cites the idea of white viscosity by Arun Saldanha, that “refers to how an aggregate of cultural practices work in concert in order to ‘make white bodies stick together and exclude others.’” This is the history behind every “white trans person [who] charges their crystals during a full moon, moves through an asana, does a tarot reading for themselves or a friend…” Ultimately, there is no magic bullet. “The only way around it is straight through.”

The scholarship around trans feeling, Malatino argues, is not as rich as it should be. Affect theory should interact with trans theory just as much as it does queer theory. And, fundamentally, affect theory’s interaction with trans theory would index a plurality of negatives. It would overturn the command to feel good and allow for care that recalibrates what is possible when we feel bad. It could be argued that since this book helped me feel ok about feeling bad it too is a sort of self-help manual and some trans people may find this book a set of questions they have heard again and again–a trans after school special, but in naming these negative feelings it can also give the reader a protective spell worth gifting their community.

In the weeks after FFS, I try to explain the central argument of the book and why it struck a chord with me–but the answer is very simple. When I felt bad, when others commanded me to feel better, the book just held me. 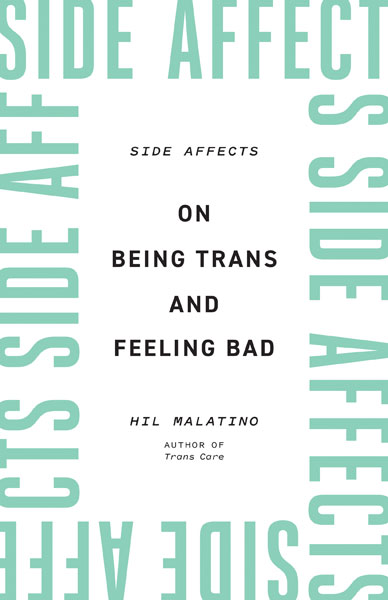