Opera and science fiction are more alike than you might imagine. They both deal with people in extreme situations: people caught at the end of their tether in forbidden affairs, on deserted planets, on the brink of bloody revenge, or hurtling through space in failing starships. They both put regular people into dire circumstances and allow wild and weird sagas to unfold. They can both tell sublime truths through absurd stories. Some operas, like Fresh Squeezed Opera’s new Self Defined Circuits, which opened last week at HERE Arts Center, take the best of both artforms. The production is so well done it makes one wonder why sci-fi operas aren’t more common. You would think that after nearly a century of space operas in literature and film, the genre would have taken off in grand operas. And yet, like so many styles which transformed the way that billions of people experience reality, science fiction unfortunately passed opera by.

Admittedly, there is something uncanny about watching a science fiction opera. Jillian Flexner and Orlando Segarra’s work is, on the face of it, a weird story to tell through opera. It tells the tale of a sex robot who discovers what it means to be a woman while trapped in a world created by her programmer. Her sung journey of self-discovery ultimately leads her to escape her creator and set out on her own to find out who she really is. My friend who joined me at the opera told me that its premise reminded him of an anime. The set up is simple, absurd, and extremely genuine with no distanced irony about it.

Self Defined Circuits opens in a basement laboratory: a sparsely furnished room with a few computer screens, tools, and an array of unused artificial human parts. The word “Electricity” is projected onto a wall. The character, Cora, is a “Siri” device, performed off stage by Cara Search and Elyse Kakacek, who appear on screen on stage as two women with their faces painted to look pixelated. They sing the word “Electricity” in high-pitched robot voices reminiscent of the drone of a swarm of locusts. In the first moments of the opera my heart sank. I thought I was in for a night of corny avant garde theater. I needn’t have worried. While the setup of the opera sounds like a disaster, like an overambitious undergraduate thesis project gone wrong, the performance itself is so artfully done, so sensitive and authentic, not only did I enjoy myself, I started to question some of my prejudices about experimental theater itself. Self Defined Circuits is able to take that undergraduate thesis project premise, and through mature skill allow the passion and sweetness of the creators to come to the fore.

The show is performed in a tiny black box theater, with a minimal set and barely enough room on stage for the entire cast. The orchestra is smooshed together in a hallway, with the musicians almost on top of one another. Despite the conditions, they were able to make a highly professional and, at times, even sublime sound. The show combines electronics with orchestration, with synthesizer sounds integrated with live orchestral music. There are strobe lights and projections and the live characters on stage duet with the artificial “Cora”on the screen. The effect is genuinely unsettling. Search and Kakacek’s voices, however, so pointed and gorgeous and crisp, lifted me out of my technology-induced discomfort. The layering of the two modes, the classical and the experimental, carry the audience through artistically difficult moments, elegantly guiding us around sharp corners so that boredom or apathy are avoided.

The duets between the Coras and the fembot, Gal, performed by Sara Lin Yoder, are exquisite. It is some of the best music of the show. Yoder has a lovely voice with an incredible, show off soprano range, and a bright, Disney princess quality that complements this particular character well. She stomps awkwardly around the stage on her new robot legs, wearing a white ‘70s era showgirl minidress that seems like a part of her skin. Gal’s programmer, Pete, tells her that her sexualization is who she is. She was built to pleasure him and she has no other purpose in life than to be his companion.

Pete, performed by baritone Shane Brown, acts the role of mediocre white man splendidly: shuffling on stage in sweatpants and manipulating Gal through a combined whininess and authoritarianism. He opines that he lost all his friends in his obsession in making the fembot—an AI that he built to look like his favorite movie star. Now, Gal is all he has. He locks her in his laboratory at night, where she learns through the Coras about the world, about herself, and about womanhood.

The show climaxes when Gal agrees, after extensive coercion, to sleep with Pete. Afterwards, her conscience splits: her body remains artificial, but her mind becomes human. She begins to rethink her identity. This scene, in particular, displays the show’s impressive ability to create big cinematic effects with minimal orchestration and a strobe light. It would be interesting to see what the creators could do with the same cast but a much bigger budget. Opera, being opera, always wants to break out of its mold and go large, diva that it is.

Self-Defined Circuits was inspired by the composer’s life, by her experience of an abusive relationship in her early years. Flexner writes in the show notes that while in this relationship she was forming ideas about gender and identity. “The most invasive and damaging thing he ever did was to define these for me,” Flexner says. “For a very long time, I lived trapped within his definitions of who I was and what I meant to the world. I wanted this opera to reflect this abuse: that defining a person is just as damaging as any other type of harm.” The fembot Gal, armored with an embryonic new identity, and newly clothed in a curtain and a belt made from a computer cable, takes her fate into her own hands in the final act of the opera.

Like Gal, Self-Defined Circuits breaks a lot of boundaries. This welcome and much-needed new opera can count itself among the contemporary works that are attempting to save classical music from itself. As an opera that elegantly integrates experimental and classical forms, it seeks a new identity for the genre itself. 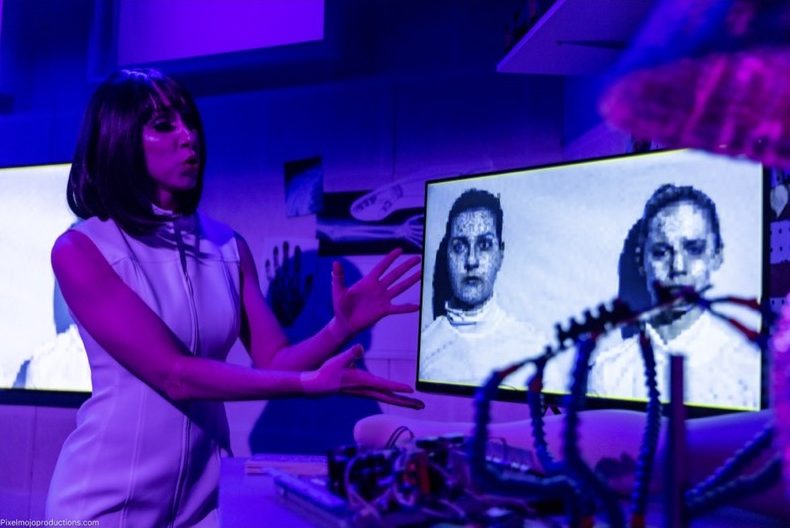