William Shakespeare’s works have proven irresistible to many classical composers through the centuries, yet there are few operatic adaptations that have remained popular. One of the latest attempts, Hamlet with music by Brett Dean to a libretto by Matthew Jocelyn, arrived Friday night as the Metropolitan Opera’s final new production of the season. The striking if unengaging work proved to be less a straightforward adaptation of Shakespeare than a spikey, self-conscious meditation on Hamlet. While it’s unlikely to take its place next to Verdi’s Otello and Falstaff or Gounod’s Roméo et Juliette, it did offer the marvelous English tenor Allan Clayton the opportunity to make a remarkable local debut as the tortured and ineffectual Prince of Denmark.

The Met imported Neil Armfield’s unsparing production from England’s Glyndebourne Festival where the Australian composer’s second opera premiered in 2017. Throughout their adaptation, Dean and Jocelyn play with their audience’s expectations of Hamlet: in fact, it’s nearly impossible to imagine what anyone unfamiliar with Shakespeare’s play could make of their hermetic work. Despite some inevitable abridgement, the nearly three-hour opera follows the play’s chronology. However, after a brief orchestral and choral introduction, Clayton’s murmured first words “…or not to be” immediately evoke Hamlet’s most famous soliloquy which doesn’t appear until the play’s third act.

Perhaps aware that Dean’s boisterous yet fascinatingly intricate orchestration would make much of the text indecipherable, Jocelyn randomly places many of Shakespeare’s most famous lines into the mouths of the traveling actors who arrive at Elsinore. As Hamlet quizzes the four players, they declaim rather than sing them winning knowing chuckles from the audience. Unfortunately, the usually surefire Murder of Gonzago that follows is also mostly carried out in accompanied speech resulting in one of the opera’s least effective sequences.

Before the premiere of his 1968 Hamlet opera, English composer Humphrey Searle asserted that the aria is dead, and indeed there are few in Dean’s work following Hamlet’s opening monologue. As Shakespeare’s play is particularly noted for its soliloquies, this Hamlet gets few. Even when his full-on “To be or not be” finally arrives, it soon develops into a duet with the frightened Ophelia who has been eavesdropping.

An enormous banner picturing Laurence Olivier’s Hamlet contemplating Yorick’s skull greets Met audiences as they approach the opera house. Yet that smoldering movie hero couldn’t be farther from Clayton’s portrayal though the tenor is roughly the same age the English actor was when he directed and starred in his Oscar-winning film. Though it doesn’t include the texting and smartphones that appear in Simon Stone’s recent modernized Met Lucia di Lammermoor, Armfield’s Hamlet does update the action to modern times.

Stocky and unkempt in a black t-shirt, pants and jacket, Clayton (whose Twitter is @fatboyclayton) gave us a brooding, entitled outlier unable to fit in with the chilly, chicly dressed courtiers who people his uncle’s court. The tenor’s compelling, multi-faceted characterization was enlivened by unexpected comic touches suggesting an aging frat-boy ill-equipped to deal with the life-changing events he’s confronted with.

Yet, for all Clayton’s charisma and beautifully nuanced singing, his Hamlet remained an oddly unengaging figure. While the hard-working orchestra (abetted by two small ensembles located in opposite balcony boxes) boiled feverishly with a myriad of unusual colors, too often Dean’s knotty, ungrateful vocal writing, as often in many contemporary operas, merely grated. Its difficulties impaired nearly all the cast’s ability to communicate the Elizabethan text and most words are lost, though Clayton and William Burden as a repellently unctuous Polonius stand out for their clarity of diction.

After a disgruntled audience member heckled her most recent Met appearance, soprano Brenda Rae returned with an endearing Ophelia so fragile that the brutal, clangorous world surrounding her made her doom unavoidable. Her superb mad scene which opened the second act, a wild contemporary spin on the celebrated coloratura showpiece from Ambroise Thomas’s 1868 Hamlet, introduced a pronounced shift in Dean’s score.

The music of the remainder of the opera was far less assaultive and more eager to engage its audience. The trio in which Gertrude comforts the grieving Laertes while Ophelia sings from high in the opera house ravished the ear and touched the emotions as did Hamlet’s searing cry of grief upon learning of Ophelia’s death. Unfortunately, the gravedigger’s scene that preceded it felt attenuated and decidedly unamusing.

Despite the gung-ho liveliness of Aryeh Nussbaum Cohen and Christopher Lowrey, the “comic relief “of Rosenkranz and Guildenstern also fell flat as it poked easy fun at foppish countertenor stereotypes. Though his gravely gravedigger disappointed, John Relyea’s riveting horror-movie arrival as the bare-chested and -footed Ghost dominated one of Dean’s most chilling scenes. Horatio, Hamlet’s friend, remained rather anonymous despite Jacques Imbarilo’s best efforts, but David Butt Philip’s stirring and virile Laertes seconded the strong impression made by the tenor’s debut in Boris Godunov earlier in the season.

Lowrey, Imbrailo and Philip were repeating roles they created at Glyndebourne as were Rod Gilfry and Dame Sarah Connolly as Claudius and Gertrude. Now over 60, the American baritone gave a boldly forthright performance, more convincing in the king’s plotting than in his brief contrition. Connolly’s glamourous queen was immensely sympathetic but too many of the frequent high emerged pressed and squally.

Conductor Nicholas Carter in another of the many Hamlet Met debuts demonstrated impressive command of his varied forces. In addition to an orchestra which included unorthodox percussion “instruments” like plastic bottles, sandpaper, aluminum foil and a frying pan, a group of eight singers performed from the pit. Beyond the two instrumental groups positioned in the theater, chorus members also performed briefly from Dress Circle boxes, a gesture which seemed gimmicky rather than necessary. Too often one was tempted to relish the phantasmagoric orchestral colors rather than concentrate on the punishing vocal lines.

Thomas’s grand opera with its inauthentic happy ending is occasionally revived, but Searle’s Hamlet, as well as another late 1960s opera by Sándor Szokolay, failed to make much of a mark. I wonder if Dean’s post-modern, unsettling take will have a long life. It was greeted with fervent ovations Friday night with nary a boo to be heard, though many audience members fled after the long first act. Armfield’s production travels to Munich’s Bayerische Staatsoper next summer, again with Clayton in the lead.

After the enthusiastic response to Terence Blanchard’s Fire Shut Up in My Bones on opening night was followed by a more measured response to Matthew Aucoin’s Eurydice in November, the Met’s third 21st century work this season has the advantage of a surefire title though many may find its unorthodox approach to Shakespeare alienating. International audiences will get the chance to experience Hamlet when it is transmitted in HD on 4 June.

Dean’s work will not be the final contemporary Shakespeare opera at the Met during the 2020s. John Adams, whose previous works include Nixon in China and The Death of Klinghoffer, tackles a decidedly less controversial subject when his Antony and Cleopatra arrives at the San Francisco Opera for its opening night in September. As it’s a co-commission with the Liceu Opera Barcelona, the Teatro Massimo Palermo and the Met, New York audiences may soon experience yet another unusual operatic take on Shakespeare. Let’s hope it receives a happier welcome than Samuel Barber’s Antony and Cleopatra did when it opened the Met at Lincoln Center in 1966!

In the meantime, Robert Icke’s acclaimed version of the play–delayed by two years–finally arrives at the Park Avenue Armory next month with 27-year-old matinee idol Alex Lawther in the title role. 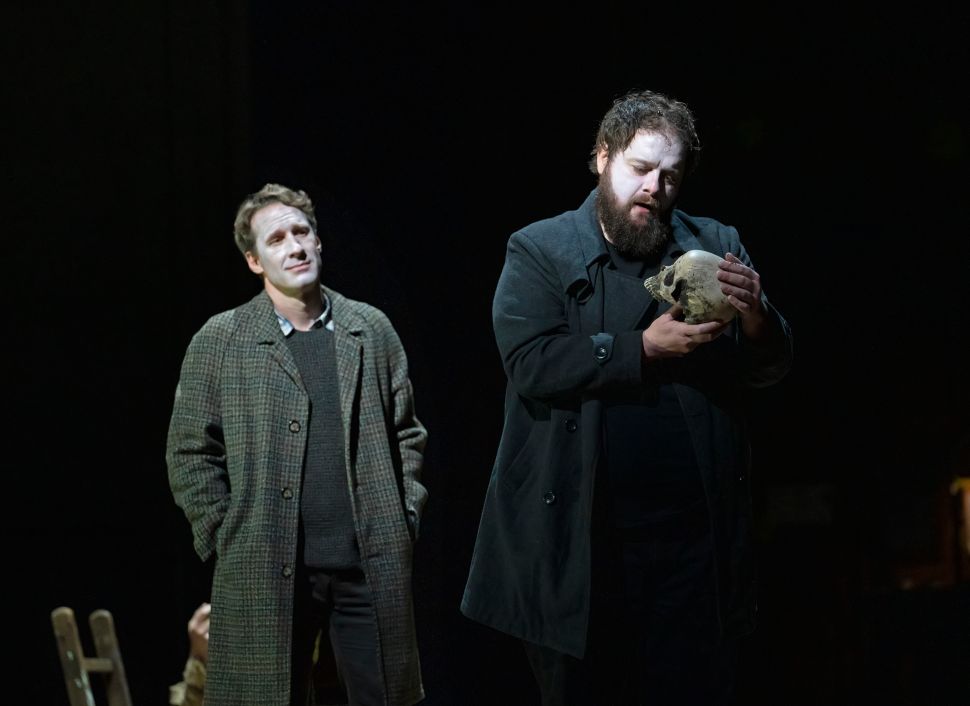