Twenty-five years ago, Buffy: The Vampire Slayer busted horror stereotypes wide open by subverting the “dead girl” trope. The titular heroine—a blonde cheerleader—wasn’t a helpless love interest to be saved or mourned, but a formidable fighter with ambitions of her own: the slayer. Then, about 20 years ago, a woman received the blame from fans for “ruining” the show during its controversial sixth season. At the time, series creator and showrunner Joss Whedon was stretched thin working on his new show Firefly and writing Buffy’s famous musical episode—his only writing credit during the series’s sixth season. As a result, executive producer Marti Noxon became de facto showrunner, catching the flack for the season’s darker tone and surprising plotlines.

During the show’s first four years, viewers basically knew what to expect. Buffy (Sarah Michelle Gellar) fought supernatural villains—vampires, robots, and even a giant praying mantis. But the show was more than just slasher tv. Buffy distinguished itself by using these otherworldly baddies as stand-ins for the trials and tribulations of adolescence, offering up smart commentary on relevant issues in unexpected ways.

Viewers continue to debate how much Noxon’s increased involvement contributed to the season’s new direction. After Buffy, Noxon went on to create television series of her own, including Unreal, Girlfriends’ Guide to Divorce, and Sharp Objects, all of which center women and explore misogyny and power. Given Noxon’s post-Buffy credits, it’s not hard to see her influence on the show’s sixth season.

Buffy’s penultimate season is still as polarizing as ever. Yet, in light of recent allegations about Whedon’s abuse of power on multiple sets—including Buffy’s—season six was perhaps more revealing and ironic than viewers realized.

Aside from Buffy’s toxic relationship with her enemy-turned-lover, Spike (James Marsters), journalists and fans levied the majority of their criticism at one element of season six: Buffy’s main nemesis, the aforementioned Trio. As indicated by the critics consensus on Rotten Tomatoes, which labels season six a “series low,” audiences struggled to take the Dungeons and Dragons-playing nerds who decide on a whim to “take over Sunnydale” seriously as villains. In a 2017 Vulture ranking of all seven seasons of Buffy, Sarah D. Bunting deemed the Trio “less credible as Big Bads than they are tiresome.” (She ranked season six second to last.) Similarly, in 2020, Samantha Highfill wrote for Entertainment Weekly, “The Trio? That’s fun for an episode or two, but they simply don’t carry the weight of a real Big Bad.” The three even landed on Screen Rant’s 2017 list of Buffy’s most ridiculous foes.

However, two decades on, many critics’ and fans’ view of the Trio has shifted. Once thought silly, or at least too on-the-nose for a show that thrived using allegory to explore the human condition, the sexist threesome now appear more terrifying for being ordinary men. Twitter user @buffyforums recently thanked the actors who portrayed the Trio, noting that the villains “grow more relevant with each year.” In 2017, Vanity Fair contributor Joanna Robinson dubbed the season “a frightening look into the entitled, misogynist rhetoric that rose to the surface during the Gamergate culture wars of 2014, and has seemingly infiltrated everything since—the 2016 presidential election included.”

A triple-sized thank you to @Dannystrong, @adambusch and @tomlenk for your #Buffy roles as Jonathan, Warren and Andrew – the Trio. Your #BuffyTheVampireSlayer villains (and friends and allies) grow more relevant with each year. #BTVS #BuffySlays25 #Buffy25 pic.twitter.com/4GQPnXC0kj

Throughout the season, Jonathan, Andrew, and particularly leader Warren harass Buffy, the Scooby Gang, and most women they interact with. But as the season progresses, their violence grows from hurling disgusting, gender-based insults (“You really are asking for it, you know that?”) to attempted rape and successful murder. Fueled by woman-hating rage, the Trio exposed that any ordinary man—geeks and nerds, included—can become a monster.

Watching Buffy’s sixth season in 2022, the creative decision to center three prototypical incels as the heroine’s main antagonist seems less like a mistake and more like an insightful choice. But given Whedon’s reputation as a “fallen feminist,” it’s also an ironic one. In Sex and the Slayer (2005), Buffy scholar Dr. Lorna Jowett notes that Warren “uses his power to dominate,” views his brains as his most masculine quality, belittles others to bolster himself, and feels deeply anxious about his sexuality. Looking back, did Noxon really “ruin” Buffy by steering the show in a different direction during season six? Or did she—intentionally or not—allude to what was happening behind the scenes?

While Whedon has admittedly always seen himself in Buffy’s best friend Xander Harris (Nicholas Brendon) — a sexually frustrated “nice guy”—Jowett’s descriptions of Warren are also eerily similar to accusers’ descriptions of the showrunner. In 2017 in a guest post for The Wrap, Whedon’s ex-wife Kai Cole called him a “hypocrite preaching feminist ideals” and accused him of having multiple affairs. She alleges he once said to her, “When I was running Buffy, I was surrounded by beautiful, needy, aggressive young women. . . . Suddenly I am a powerful producer and the world is laid out at my feet.” In Vulture’s infamous 2022 interview with Whedon, in which he and journalist Lila Shapiro discuss his affairs and other accusations made against him, he said, “he had felt he ‘had’ to sleep with [young women on Buffy’s set], that he was ‘powerless’ to resist.”

In 2020, Ray Fisher claimed Whedon had been abusive on the set of Justice League, which fellow actor Gal Gadot soon confirmed. Then, in early 2021, Charisma Carpenter who played Cordelia Chase on both Buffy and Angel took to Twitter to stand with Fisher and share her own experiences, outlining the ways in which Whedon abused his power on both sets and personally targeted her. Multiple Buffy-verse crewmembers and actors corroborated Carpenter’s account or voiced their support, including Eliza Dushku, who portrayed slayer Faith, Marsters, Gellar, and Noxon. (When previously asked about Cole’s claims in a 2018 Vulture interview, she said she had “never experienced [Whedon] that way.”) The list of allegations goes on.

These claims against Whedon are all the more painful because of his self-described feminist beliefs and history of championing strong female characters who subverted stereotypes. (Of course, looking back it’s clear that while Buffy was groundbreaking in so many ways, it also peddled more insidiously toxic ideas about women.) The statements about Whedon’s on-set behavior also call into question the creation of villains like the Trio: Is it a form of cover, or confession, that Buffy’s creator recognized the threat of toxic masculinity in season six’s Big Bad, while allegedly abusing his power?

Judging by her Twitter bio, Noxon does accept at least some of the blame — or rather, the credit — for season six’s dark direction and the Trio’s presence. Given that most of her work also centers on women, and she has spoken out about other abusive showrunners in the past, her impact on the season seems clear. But Whedon’s influence was never wholly absent. In the 2018 Vulture interview, Noxon confirmed she had way more input over that season than others, but qualified that “anybody who knows Joss knows that his idea of taking a back seat is not every single thing.” Whedon has also insisted he was still intimately involved in season six despite his other commitments, remarking in a 2005 interview with a movie blog, “I love season six. It’s really important. . . . Instead of a bigger than life villain, we had the nerd troika. Instead of drinking blood and doing spells as sexual metaphor, we had sex. Things became very literal and they lost some of their loveliness.”

Over 20 years since the debut of Buffy’s sixth season, the Trio arc appears more relevant than ever, with viewers reassessing the once-hated storyline and dubbing it one of the series’ best. However, understanding how the Trio came to be and reconciling the season’s themes with the allegations against Whedon is a messy enterprise. This cognitive dissonance indicates that artistic expression is not necessarily the same thing as self reflection, and catering to feminist audiences does not necessarily make a showrunner a feminist. However, while you can’t always separate the artist from the art, the art can still be good. 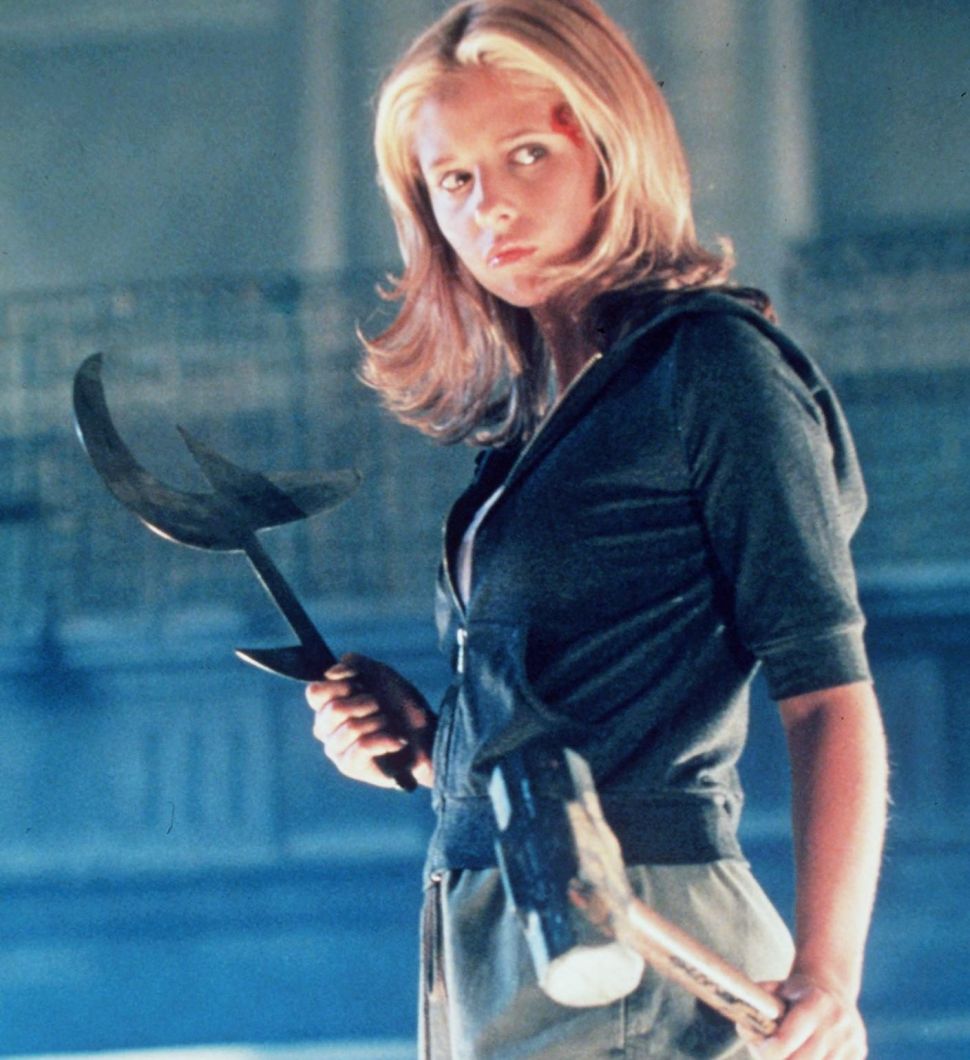