The world’s most glamorous festival opened this week with cinema’s posh elite reveling in—what else?—blood, vomit, and diarrhea. For its celebrated 75th anniversary, Cannes chose Michel Hazanavicius’ zombie comedy Final Cut as its black-tie curtain raiser. And the director couldn’t have been more delighted that his screwball look at a horror movie shoot-gone-wrong was kicking off such a bacchanale of cinematic high art. “They’re gonna laugh at a guy with green makeup taking a crap in a bush,” he told Observer during a Zoom interview before the festival started. “I can’t wait.”

The French filmmaker is no stranger to preposterous scenarios. He first came to Cannes in 2011 with a sweet little black-and-white tribute to Hollywood’s silent era called The Artist and rode it all the way to the Academy Awards, nabbing 10 Oscar nominations and winning 5 (including Best Picture and Best Director). Since then, Hazanavicius has returned to the festival a few times, most recently in 2017 with his affectionate Jean-Luc Godard biopic Godard Mon Amour—which makes Final Cut the third time he’s made a movie about moviemaking.

“I like to play with the connections between what you say and the way you say it,” he explained of the way he adopts the aesthetics of his different subjects to tell their stories. The Artist is an impeccable formalist reproduction of silent filmmaking. Godard Mon Amour breaks into sequences that mimic the electrifying style of the Nouvelle Vague. And now, with Final Cut, Hazanavicius zestfully embraces the lowbrow, lo-fi, low-budget world of horror quickies with his use of grainy handheld cinematography and buckets of bodily fluids.

What unifies these films? Moments of creative crisis. The transition to sound from silent movies in The Artist; Godard’s feeling of political irrelevance in Mon Amour; a shoestring zombie movie falling to pieces in real time with Final Cut. “Crisis is very cinematographic,” said Hazanavicius. “All my characters are in a world that goes faster than they do. They are running behind. They have to make very quick choices—and I usually give them bad choices, because you need some conflict.”

Horror is an unlikely subject for Hazanavicius, who was actually developing a sex comedy when the opportunity arose to do a remake of Shin’ichirō Ueda’s 2017 Japanese film One Cut of the Dead. That film, improbably made for $25,000, became a breakout cult hit, earning over $30 million in its Asian release. Its success is due to its ingenious structure: the first 30 minutes is a single-shot, uninterrupted mini-movie broadcast live on TV. And then the rest of the film is a behind-the-scenes look at what went into making that short film.

“I’m not a huge fan of zombie movies, although One Cut of the Dead is brilliant,” Hazanavicius said. “But that movie’s not about zombies. It’s about people who make movies. And because they do zombie movies with all the blood and stunts and effects, it gives the film an energy that was really cool.” It captures the scrappiness of that crew, too: wheelchair dollies, human-pyramid crane shots, and gophers blowing blood into people’s faces with a long plastic tube.

Hazanavicius multiplies the film’s metatextual angle, since his wife, Bérénice Bejo, and daughter, Raïka Hazanavicius, both have major roles. “The director’s wife is my wife,” he said. “The director’s daughter is my daughter. It’s very, very meta.” Final Cut references itself as a remake when one character watches One Cut of the Dead on his laptop.

Yoshiko Takehara, a Japanese actress who portrays a loopy film producer in the original, plays the same role in Hazanavicius’s remake, adding yet another meta layer. “I wanted that actress to come because she’s so crazy,” Hazanavicius explained. “She has such amazingly insane energy that I thought it would help the audience believe that this incredibly stupid enterprise comes from her brain.”

She makes it credible that a French filmmaker would do a zombie film in the first place. “Here in France, we don’t really have a zombie culture, and not many zombie movies,” Hazanavicius said. “There was something strange about a French guy wanting to do a zombie movie and everybody saying yes. I thought it was more exotic and more believable to do it as a remake of a Japanese success, which is why everybody says yes.” It’s also why the French characters in the first 30 minutes all have Japanese names—yet another gag that Hazanavicius uses to further goose his house-of-mirrors approach.

Most of all, Final Cut is a blood-and-puke-and-feces-stained ode to any creative endeavor that embraces chaos, something that filmmakers know all too well. “Making movies is just a struggle,” said Hazanavicius. “You want integrity and an artistic vision. But you have to deal with the triviality of reality: the weather, your collaborators, not having electricity. You have to adapt. Jean Renoir said that you have to keep the studio door open. Which means everything that’s real comes on your set. You do your best, but you can’t control it. You have to keep the door open.” 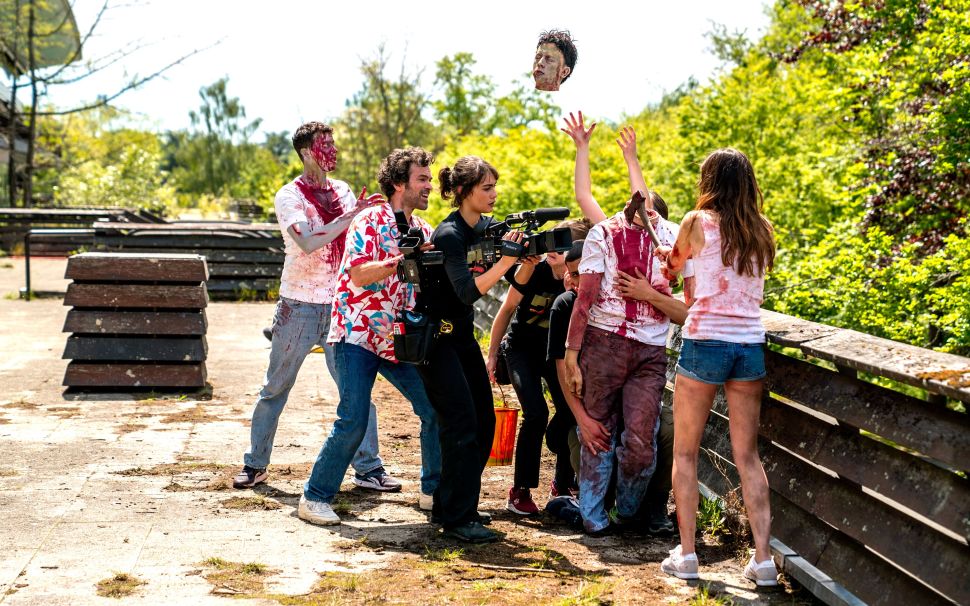