In the wake of the hideous massacre in Uvalde, Texas on May 24, “Sudafed” began trending on Twitter. Not because it’s allergy season, but because in many parts of the U.S., it’s easier to buy multiple guns than packages of Sudafed, a popular cold medicine.

Depending on the type of firearm and region of the country, buying guns can be relatively straightforward. In many states, there is no waiting period or limit on the number of weapons that can be purchased, provided the buyer passes a federal background check. Purchases of medication containing pseudoephedrine, the active ingredient in Sudafed, however, is regulated bv the U.S. Food and Drug Administration, which places strict limits on the number of tablets that can be purchased in a given 30 day period

The two main reasons why it’s easy to buy firearms in the U.S.: the Second Amendment and its exploitation by the political powerful gun lobby. The one reason why it’s hard to buy Sudafed: methamphetamine.

Pseudoephedrine can be used to manufacture meth, and during the early years of the meth epidemic in the 1990s and early 2000s, its easy availability helped small-scale dealers cook and sell the drug from their homes. In Missouri alone, there were almost 3,000 meth lab busts in 2004.

In response, Congress passed the Combat Methamphetamine Epidemic Act of 2005, part of the Patriot Act, which, among other things, made pseudoephedrine much harder to purchase. Under the law, starting in 2006, packages of the drug must be kept behind the counter or in locked cases, purchasers have to present identification and there are limits to how many tablets can be bought (the limits vary state-to-state).

Drug companies—led by Sudafed’s maker, Johnson & Johnson—adjusted by switching ingredients. The company now sells a new formulation, called Sudafed PE, which is made with phenylephrine, a chemical which can’t be used to make meth, as well as some medications that still use pseudoephedrine. Unfortunately for both J&J and cold and allergy sufferers, phenylephrine doesn’t work nearly as well as pseudoephedrine in preventing runny noses.

And while the restriction on Sudafed sales helped end the spread of small-scale meth labs, it didn’t end the production of methamphetamine, which simple moved south of the border to much larger-scale labs in Mexico. 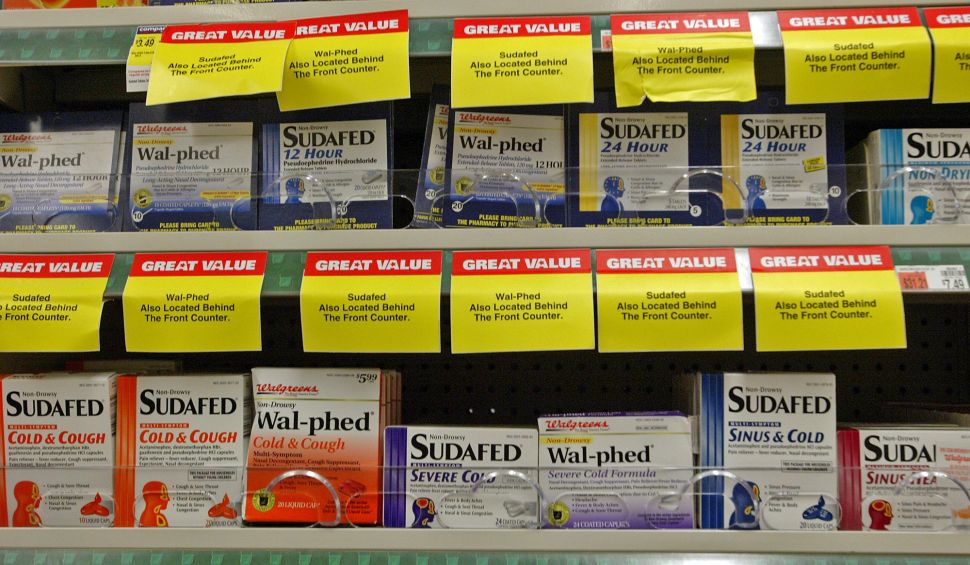