The most expensive contemporary art fair franchise is back in the city. Squeezed on three floors at The Shed, this year’s edition of Frieze New York—its ten-year anniversary—is dominated by the polyphonic echoes of the body, multilayered physicality, and a tension between imposed constraints, and unlimited potential.

Over 65 galleries are divided between the main section and Frame, a curated shortlist of emerging galleries. It’s the first fair of recently appointed director Christine Messineo at the helm of Frieze NY.

An art fair brings together an interesting mix of people—trust fund kids, influencers and blue-chip groupies (often the same), social and hungry gallerists needing a return on investment for their booths, collectors and dealers mixing New York City pleasure, with business, and mingling. The richer, the less palatable the fashion usually is. Social interactions are often a spectacle, shallow except when they reach dramaturgical impressionistic levels when a possible buyer compliments a gallery. A theater of the mundane.

There’s interesting art (more below) and gimmicky art, like Albert Oehlen’s caffeinated vending machine on Gagosian’s central booth. People queued and took selfies—because of course they would. In addition to this crowd, there are vibes: the atmosphere of an exclusive airport lounge on The Shed’s top floor, where sponsors of Frieze NY—Breguet, La Prairie, and others—have set up a luminous non-place of insular, ethereal luxury where it’s always champagne or wine o’clock. It comes in sheer contrast to the fair’s virtue-signaling, its inclusion of civic initiatives such as PLAN YOUR VOTE, founded by Messineo, and non-profits organizations. Undeniably, it’s a hard split to please constituencies whose interests seem to further diverge, two years into the pandemic—art for the people and profitable art.

Back to art and the fair’s common thread which centers on the body as both speculation and projection, we’re drawn to its expanding realm—a froth, a mirage, a concern, a condition, a proposition, a liberation, organs, blood, flesh, sweat, and so much more.

And today, the body remains a resolutely anger-fueling, biopolitical terrain. It might not fit entirely; it can feel small, oppressive, and reductive. And it’s revolting to still be concerned about reproductive rights in 2022. With the possible overturn of Roe v. Wade in the US, other regressive policies in Central Europe and elsewhere, injustice calls for expression and action.

Trigger Planting by A.I.R. Gallery and the collective How to Perform an Abortion, in collaboration with the National Women’s Liberation, poetically paints a grim picture. Using natural plants routinely used for fertility management, the artwork covers the surface of US states that are under some kind of abortion ban, or enforcing abusive limitations to a woman’s choice over her own body.

Trigger Planting weaves nowness and tradition in a way that emphasizes cyclicality and inter-generational transmission, not unlike Brazilian artist Sonia Gomes (b.1948) who incarnates the weaponization of womanhood in contorted flesh in Lágrina (2020). In this, Gomes channels the magical properties of organic expression, through the lens of Blackness represented by a stitched assemblage of colorful fabrics, lace, and bamboo.

By contrast, the tactile teal flow of Julia Chiang’s Through Us, Through You (2022) from The Modern Institute provides an appeased (menstrual?) lullaby to the discomfort of the imposing cast bronze of Very large cradle (2018) from Sherrie Levine, at Xavier Hufkens, which resonates with her previous sculptural works such as Tight Coffin (2013) and Body Mask (2007). Is there any objective purpose to a woman’s body?

Unruly bodies are sites of desire and pleasure. Sex and kink are underwhelmingly tame at this year’s Frieze NY—sprinkled here and there, as if echoing the fact that, overall, we’re still not in any hot anything hedonistic season just yet. Except for one amazing piece.

The body is an ambiguous consciousness and an intelligence. Stephen Willats (b.1943) shows the power of dissent in Omni-direction Search Engine Drawing No.5 (2018) at Victoria Miro, while Shilpa Gupta’s Untitled (2021) at Tanya Bonakdar reaffirms the centrality of bearing witness in an renewed visual appropriation of “three wise monkeys.”

Bodies borrow from an inherited canvas where a personal language can be spoken, read, and deciphered. In the solo exhibition of Tehran-based artist Homa Delvaray (b.1980) “The Garden of Desolation,” we encounter a symbolic aerial view of a patch of land, a place for the artist to confront legibility and non-translatability with Sufi and mystic poets, such as Bedil Dehlavī, whose written poetry binds the modernistic installation. The show is presented by another Frame participant, Dastan, an ambitious Iranian gallery who started from a basement a few years ago.

Proyectos Ultravioleta gives voice to Palestinian duo, Basel Abbas and Ruanne Abou-Rahme, and their search for meaning, justice, and truth among interlaced narratives. In single channel video, At Those Terrifying Frontiers Where the Existence and Disappearance of People Fade Into Each Other (2019), we see the bruised faces of Palestinian protesters to Great March of Return in 2018-2019, portrayed as gaming avatars, in a decrepit world where the fragmentary words of Edward Said keep a struggle for existence alive. Mozambican artist Cassi Namoda (b.1989) discusses displacement and post-colonial memories in A Portrait of Gungunhana (2021), which uses imagery and techniques from the former colonizing power to proudly depict the “Lion of Gaza,” a tribal king who reigned in the late 19th century before being captured by the Portuguese Empire.

Artists are also seeking presence in absence. The paintings of Anne Buckwalter (b.1987) document a cyclical domestic quotidian at Rachel Uffner that engages our relationship to materiality. For Rosângela Rennó, the elusive mortuary faces printed on marble in her series “Seres notáveis do mundo” (2014-2020) at Mor Charpentier are ways to grapple with non-Western identity, and challenge erasure from a French phrenologist. Idris Khan’s sumptuous Adagio in Blue (2022) at Sean Kelly remembers the body as music and silence, as we ritualistically turn to the body for healing and retreat. François Ghebaly presents Jacqueline Kiyomi Gor’s totemic Sound Blanket No. 11 (2022) which captures the necessity of shielding and insulating ourselves from unwanted noise. Too bad I can’t afford it.

With bodies come choices—solo or group exhibition? A bit of both at Frieze NY. Among the galleries that presented solid, meaningful, and cohesive bodies of work, we note Canada, David Lewis, Mendes Wood DM, Sadie Coles, and Société Berlin.

Navigating this strange world of paperless, QR-code-subjugated fair, we briefly fall for an illusion of normalcy after being asked for a proof of vaccination at the entrance, amid COVID “high alert” levels in NYC.

Sociologist Erving Goffman wrote about interaction rituals and the presentation of the everyday self in relation to theater. Art fair characters are assumed, and the stage is ready-made. The setting is controlled, and tension is maintained between assertion and avoidance, control and healing, front-center and subdued agents.

A person and their body “merely provide the peg on which something of collaborative manufacture will be hung for a time,” Goffman wrote, contextualizing the possessor of a body in relation with the force of wider social establishments.

The number of galleries featured at Frieze NY have more than halved between 2012 and 2022, while tickets continue to reach record highs. Can there be anything radically unconventional in such a codified, commodified fair system, except to watch this bubble further grow in bottomless obscenity, and agree or disagree with the selective market snapshot Frieze NY defends? 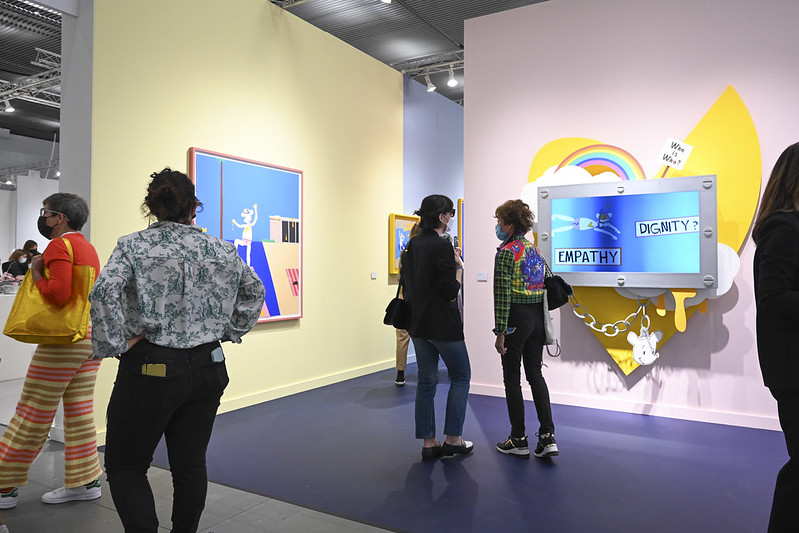