Cannes went crazy for Tom Cruise this week, kicking off the international premiere of Top Gun: Maverick with eight fighter jets flying thunderously over the red carpet and beribboning the sky with red, white, and blue smoke. You want arthouse manna? Not today. This is the publicity-thirsty Cannes of yore, where a house-sized inflatable Maverick flight helmet sits on the main thoroughfare, the Boulevard de la Croisette, looming over the Mediterranean Sea.

The cine-fou French were positively giddy over the 59-year-old Hollywood legend, last in Cannes exactly 30 years ago with 1992’s Far and Away. And, befitting the grandiose occasion, festival organizers even surprised the mega-wattage actor with an honorary Palme d’Or, their coveted main prize, prompting one of the night’s many standing ovations from 2,300 audience members who felt the need for speed.

Haters who say that movie stars are passé—and that streaming services are going to kill the theatrical experience—face stiff pushback from the three-time Oscar nominee. If anyone is spoiling for a fight against the impossible forces of Netflix and Disney+, it’s the man who made an enduring franchise out of Mission: Impossible. “That was not going to happen,” Cruise said about sending his pandemic-delayed Top Gun sequel straight a streaming service. “That was never going to happen.”

Cruise’s remarks came during an hour-long talk with beaming French journalist Didier Allouch, a conversation in which the actor seemed calm and subdued as a packed auditorium showered him with feverish applause. Even a staid Cruise gives off enough charisma that draws adulation, but he’s also about to turn 60 in July. The sustained longevity of that famously youthful complexion is finally starting to give way. His coiled energy is now a settled glow. He’s at a transitional moment, and possibly the Back-Nine of a career that’s lasted 41 years.

So Tom Cruise took stock of his life in a very Tom Cruise way. His interview reflections were a mix of finely calibrated humility, deep gratitude for aspirations achieved, life-is-learning platitudes, and team-player excellence. “It’s not about me, it’s about the story,” Cruise stressed.

“‘This isn’t my movie,’” he tells his costars and crew. “‘Don’t ever say that to me. This is our movie.’” It’s all the about the work ethic, and he’s pushing as hard as he can to make movies for global audiences—always has, and always will, like a celluloid Semper Fi. “I feel privileged to do what I do,” he said more than once.

“I remember as a kid,” he said soberly. “I was four years old. And I wanted to make movies, I wanted to fly airplanes. I wanted to have adventure in my life.” Age four was apparently a crucial year, since he invoked it a bit later. “I think I was about four and a half years old,” he remembered of being a budding action hero, “And I jumped off the roof.” He wanted to parachute like a toy soldier, so he used his bedsheets and promptly fell to the ground. “My face went past my feet as my ass hit the ground,” he said, “And I thought, ‘Oh my gosh, my mom’s gonna kill me.’ Because the sheets were dirty.” It’s a charming origin story for the stunt-steeped star.

Allouch lobbed a breathless softball about all his adult daredevilry—driving race cars, riding in high-speed motorcycle pursuits through Paris, dangling from airplanes, climbing the Burj Khalifa. “You are risking your life, monsieur!” he said.

“No one asked Gene Kelly, why do you dance?” Cruise replied. “Why do you do your own dancing? Why do you do your own singing? I do a musical, I want to sing, I want to dance.” He sees himself as a voracious student who constantly develops new abilities so he can make them part of a story or a character. And he wasn’t kidding about the singing and dancing, either. He applied his footloose chops from dancing lessons to his portrayal of a balding, fat-suited Les Grossman in Tropic Thunder. And his vocal lessons came in handy when he played Stacee Jaxx in Rock of Ages. “I thought, ‘How can I immerse an audience into a movie with this kind of action? And how can I entertain them?’ What can I do?”

Shooting his first film, the 1981 military-school drama Taps, was seminal. “I went to every single department and I studied every single department,” he explained. “Because I thought if I never get to make another movie again, I want to understand what it is.” His favorite craft? Cinematography. “Not just lighting, but lenses,” he clarified. “And why those lenses, and why things look the way they look.” He’s always loved watching dailies—the raw footage with all the day’s takes, otherwise known as rushes.

Owen Roizeman, the D.P. on Taps, showed him rushes. Ridley Scott, his director on Legend, showed him rushes. “I have a thing where I remember every take,” he said. “I remember everything. You know, it’s just a thing with me. And I know the lens.” Even now, he encourages the actors on his films to watch dailies. “I want you to see yourself on screen, I want you to understand the lenses.” What was it like working with Stanley Kubrick? “What was wonderful is Stanley, as he was lighting a scene, I would come in and we kind of talked about the lighting,” he said. “And then we’d look at the rushes. And we spent a lot of time talking about different lighting and lenses.”

It’s no surprise that a movie star who grew up in the MTV era has been so focused on lighting and lenses. He mentioned it no less than eight times during the interview. Image is everything. And the next mission, if he chooses to accept it, will be maintaining that image for another generation of moviegoers. “If I could just do this the rest of my life, I will never take it for granted,” said Cruise. “All I can do is the best I can do every day. That’s it.” Tom Terrific, entering his golden years, still terrifically dedicated, terrifically eager to please, terrifically driven to remain terrific. 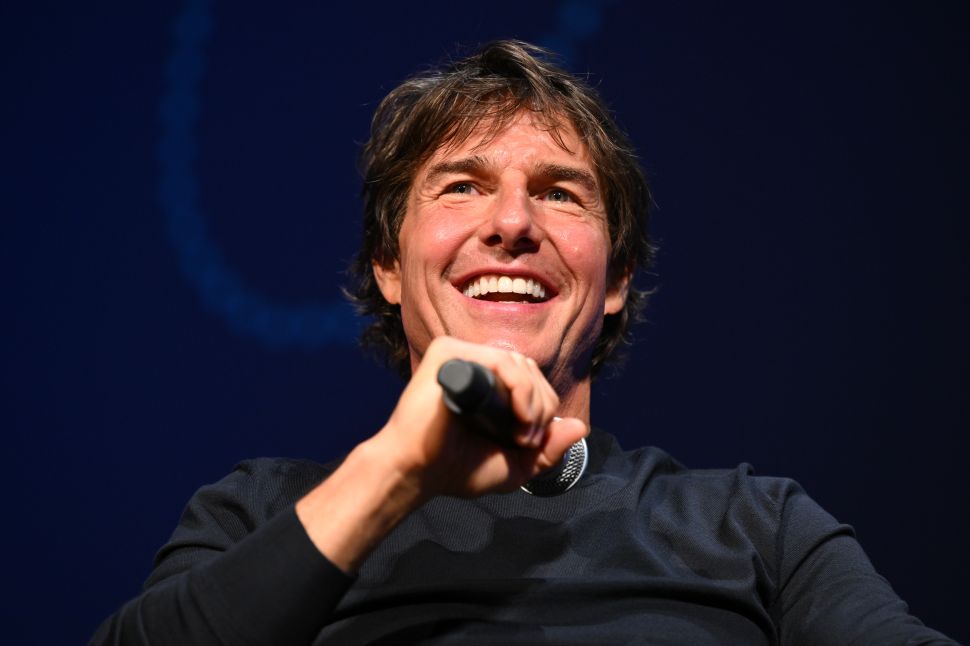