Betrothed couples heading to Las Vegas eagerly anticipating an Elvis-themed wedding may be sorely disappointed to find that neither Elvis nor his likeness will be allowed in the building.

The company that rules over Elvis’s trademarked name, image and likeness, Authentic Brands Group (ABG), has decided to crack down on unauthorized users, issuing a cease-and-desist letter in early May to chapels promising to bring the King to the wedding.

Along with clothing brands like IZOD and Nautica, ABG manages the trademarks of entertainers and sports figures, like Elvis, Marilyn Monroe, Mohamed Ali, Julius Erving and Shaquille O’Neal.

In general, “once you file with the U.S. Patent and Trademark Office it’s your job to look over the landscape and if someone is using your trademark without your permission, it’s trademark infringement,” says Henry Boyd, a clinical professor of marketing at the University of Maryland School of Business. “You have to be your own watchdog.”

Trademarked names can be worth a lot and company trademarks can be worth billions.  Companies that don’t keep an eye out for infringers could lose control of their trademarks, Boyd says. “You don’t want your mark to become generic, or to engage in full or partial abandonment of the mark.” Just ask Kimberly-Clark, owner of Kleenex.

Boyd was surprised that ABG just now decided to go after trademark infringers. “ABG acquired Elvis around 2013,” he says. “So we’re talking almost a 10 year window. There have always been Elvis wedding chapels and themed parties in Vegas. Why exercise that right now?”

The influence of a new Elvis movie

It might be related to the soon-to-be released Elvis biopic movie directed by Baz Luhrmann, Boyd says. “So there may be a spike in demand for the ‘King of Rock and Roll.’”

The trademark laws don’t apply to Elvis live shows or tributes, Boyd says. That’s because there is a right of publicity statute, he says.

Still, the publicity exception doesn’t cover everything. “If I use Elvis to draw people into a store, by having everyone dressed as Elvis, so customers can say they bought their iPhone from Elvis—that’s not going to fly,” Boyd says.

This might be a case where the trademark owners are shooting themselves in the foot. While boomers may all be bonded with Elvis, the younger set may not know that much about the King. “All these chapels in Vegas are keeping his memory alive,” Boyd says. “They were doing [ABG] a service and this is going to have a chilling effect and shut them down. It might come back and bite them if they’re too aggressive in protecting their rights.”

It’s always possible that ABG will eventually make deals with all the chapels, allowing them, for a fee, to go back to using Elvis’s likeness and that the cease-and-desist letters are just the first step in the process, Boyd says. 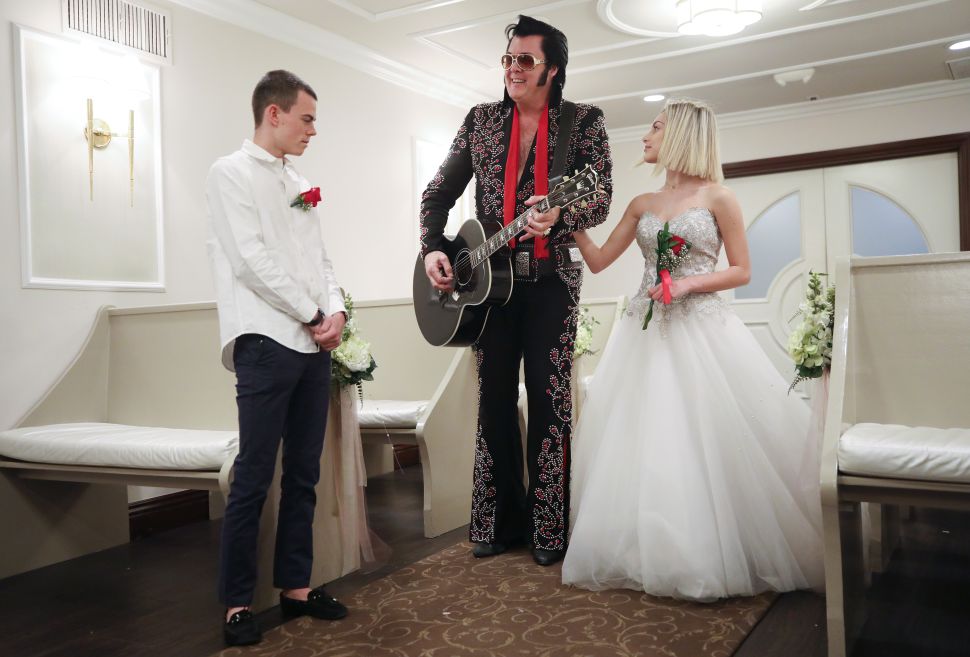