Amazon has fired one of the organizers central to the Amazon Labor Union’s victory at a Staten Island warehouse, the company and union confirmed today (June 10).

The retail giant terminated Pasquale “Pat” Cioffi, an employee at the JFK8 warehouse in Staten Island who is said to have flipped 500 votes from “no” to “yes” in the weeks leading up to the ALU’s victory there.

#Amazon has terminated Pasquale "Pat" Cioffi, a lead organizer with the ALU. Pat is a process assistant who was instrumental in the JFK8 victory, and is one of our most influential and outspoken supporters.

He was fired for arguing with a manager about mistreatment of workers. pic.twitter.com/469eqHFEKs

The union said Cioffi was fired after arguing with a manager about mistreatment of workers, and that the termination was “clearly motivated by anti-union animus.” But Amazon defended his termination and said Cioffi was let go following “a thorough investigation that revealed he slapped a female manager and called her a ‘bitch,’” according to a statement by spokeswoman Kelly Nantel, adding the company has “zero-tolerance for any type of workplace violence.”

The ALU has not responded to a request for comment and efforts to reach Cioffi were unsuccessful.

The allegations against Cioffi come as the company is preparing to argue its case to overturn the JFK8 election before the National Labor Relations Board next week.

Cioffi is latest union organizer to be fired

Cioffi’s firing follows the termination of at least two other Amazon organizers last month. Both ALU organizers were employees in the JFK8 warehouse; one was fired for “voluntary resignation due to job abandonment” after taking off work for Covid leave, while another was terminated for falling behind on productivity targets, according to Vice.

Though it’s unclear if these firings were retaliatory, they are part of a pattern of firings involving Amazon employees with ties to labor movements. Chris Smalls was fired from JFK8 in March 2020 after leading a walkout over concerns about Covid safety protocols, and is now the president of the ALU. Another JFK8 employee was terminated for cursing at an employee during a Covid safety protest, but the NLRB ruled in April that Amazon must reinstate him.

The allegations against Cioffi appear to be more egregious than previous reasons cited by Amazon for terminating JFK8 workers, which have centered on bullying, health and safety, job performance, or organizational changes.

While the ALU didn’t respond to a request for comment, it said on Twitter it was seeking a temporary injunction against Amazon from the NLRB.

A heated run-up to election certification

As more union organizers depart Amazon, the road to a contract for JFK8 workers remains shaky.

Amazon has filed 25 objections to the JFK8 warehouse union election with the NLRB, alleging the ALU “intimidated employees,” “recorded voters in the polling place,” and “distributed marijuana to employees in exchange for their support.” The company will seek to overturn the outcome of the union election in a hearing starting on June 13, which it tried—and failed—to close off from the public.

Separately, Amazon attorneys appeared before a judge on June 6 to defend themselves against allegations of illegal labor practices by the ALU and NLRB. The company has been accused of violating federal labor law by threatening workers and firing an organizer.

The union has said the Amazon objections are a bid to stall certification of the JFK8 election results. The two parties cannot enter collective bargaining for a contract until the NLRB certifies the vote, and after that it could take much longer: On average newly unionized workers and their employers take an average of 409 days to reach a collective bargaining agreement, according to Bloomberg Law.

In the meantime, efforts to unionize other Amazon warehouses have fallen short. The ALU lost a second vote at a separate Staten Island warehouse in May, while Amazon workers in Bessemer, Alabama have twice rejected a bid to join the Retail, Wholesale and Department Store Union. 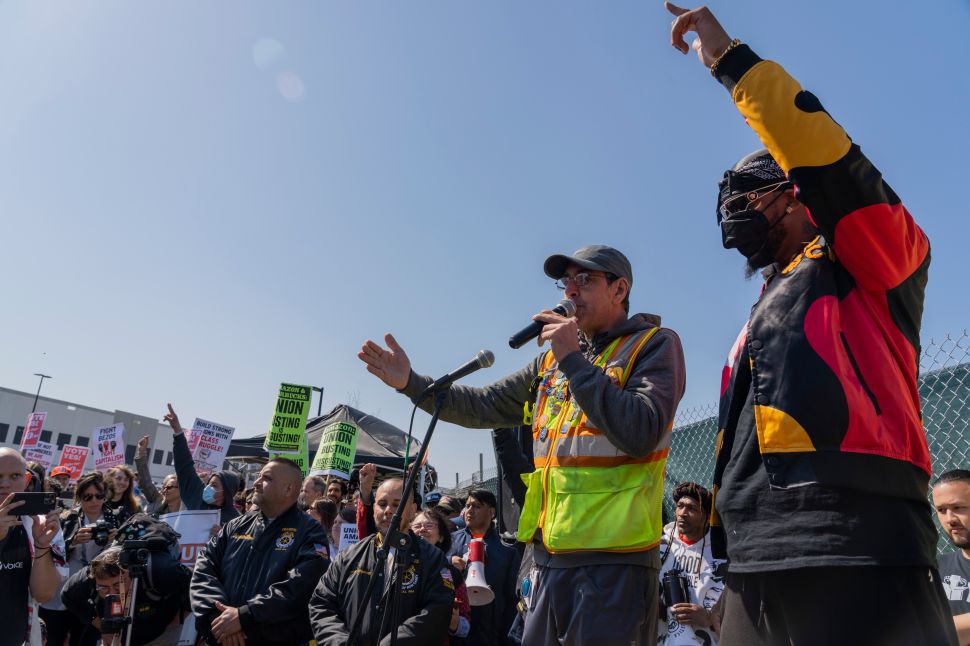