UVALDE, TX – JUNE 25: A sign is left on top of flowers at a memorial for the victims of the mass shooting at Robb Elementary School on June 25, 2022 in Uvalde, Texas. (Photo by Jordan Vonderhaar/Getty Images)Getty Images
By Natalia Petrzela • 06/29/22 10:25am

A few weeks ago, my mom group chat, usually a stream of playdates and planning, took a dark turn. Children, this time fourth graders like my own, had once again been slaughtered at school. Mass shootings are statistically rare but so horrifying that an ambient fear that your community could be next feels like a grimly accepted fact of 21st-century American parenting. The Uvalde case was both unique in its magnitude and in the gruesome conundrum it presented: one girl survived by playing dead and smearing herself with the blood of her murdered friend. Should we tell our kids, we tapped away from the sidelines of sports practices and in between zoom meetings, about this life-saving strategy, to provide them with more protection than their arguably useless lockdown drills or bulletproof backpacks? Or is this scenario simply too violent to ask a ten-year old to imagine?

This is a dilemma only a sick society could supply, and it struck me as more than just another weirdly disturbing news item, like an daycare serving kids floor sealant instead of milk, or a teacher busted for rape and distributing child pornography. Childhood, at least the idealized version of it that our dominant culture has clung to for the last two centuries, is in peril. And while people disagree bitterly about the nature of these threats and who perpetuates them, we seem to be resigned to a grim consensus about what it means to be a kid in contemporary America.

School shootings are hardly the only life-or-death challenge facing the youngest Americans. Youth suicide is ascendant, the baby formula shelves have been bare for weeks, and intense weather events insistently remind us that the clock on irreversible climate change keeps ticking. But there’s also a more subtle metaphorical death taking place: of the “romantic child,” an ideal that since the early 1800s has defined children as inherently innocent and deserving of the protection of adults. Children, the economic version of this idea holds, are “priceless” rather than producers. This ideal has always been exclusionary. Enslaved and immigrant youth often had to work and enjoyed precious little protection or empathy, and now, Black children are often assumed to be older than they actually are, the abuse they suffer minimized and their own errors treated as irredeemable rather than as youthful indiscretions.

But as an ideal, the fantasy of romantic childhood has proved durable enough that people of all political stripes proclaim that they are its true defenders. The Right has long railed about the decline of traditional values and of “normal” childhood at the hands of leftist teachers and immoral media, while liberals and progressives decry the effects on the most vulnerable of austerity policy and regressive ideas about identity.

Even on issues that dramatically divide people, a shared sense of malaise is undeniable. Take the case of vaccines for children under five, recently authorized by the FDA. Parents who had structured their entire lives around shielding their unvaccinated toddlers had expected jubilation; instead the long wait meant some only felt “dead inside.” To others, who seethed that their young children still had to mask while adults packed stadiums and bars,  their sense of abandonment and despair was equally profound. In the same vein, parents with diametrically opposed perspectives on school closures agreed that, whether due to being deprived of in-person learning or required to return to school, children were being thrown under the bus. (School bus drivers, for that matter, have been in such short supply that some children are unable to attend school because there were not enough people, or the will to pay people enough, to drive them.)

No political persuasion has the high ground when it comes to championing children. Republicans grandstand about rescuing children from groomers, but have worked to remove age requirements for marriage and to subject girls aspiring to athletic participation to invasive scrutiny that itself constitutes abuse. The party of “family values” ghoulishly separated immigrant children from their parents and a few years later failed to condemn a police force that restrained parents attempting to rescue their children from a shooter armed with a weapon to which their policies eased access. These self-appointed saviors of the unborn consistently deny funding for maternal health care, family leave, and early education, but defend saddling poor children with school lunch debt. They wring their hands over the psychic injury to white children forced to learn about racism and attribute mass shootings to emotional disturbance, all while cutting mental health budgets.

Progressives have their own hypocrisies to explain. Despite decades of arguing that public institutions such as schools and playgrounds are essential, during the pandemic blue-city leaders showed little urgency to reopen these crucial spaces, and were outright dismissive of the now undeniable effects of locking children out of play and learning. Mouthing nihilistic mantras like “there’s no such thing as learning loss” or “kids are resilient,” they more subtly set the stage for eroding the institutions and experiences that give kids’ lives structure and meaning: by reframing “in-person learning” as an “opportunity” rather than a right, restricting extracurricular activities, curtailing community activities like family classroom visits, proms, and graduations, and arbitrarily canceling exams.

It feels like children today are in the proverbial—and too often, literal—crosshairs. Even the optimistic take that “they’ll save us” from the climate disaster or race war or retrograde gendered order we bequeath them suggests that adults are abdicating a responsibility of care we at least once pretended to take seriously. If that sounds incongruous with the parents who seem to be working harder than ever to care for their own kids, it isn’t. While America might be awash in kids’ menus, plastic toys, and articles about overparenting, this country has long exhibited little collective care for children. American parents might seem especially, even obsessively, invested in protecting their own kids —or their parental rights—because it has never been clearer that no one else will. Many of us with the privilege to be largely insulated from the worst of this institutionalized heartlessness have been jostled from that security in the last couple of years, a potentially radicalizing experience that could galvanize unprecedented support for prioritizing children’s well-being. Less noble, but perhaps predictable, is a turning inward I am troubled to notice even in myself. After rage and exhaustion my most powerful emotion is relief that my kids have things I once took for granted: their school stayed open this year, their camps could fully staff, and their negative swabs allow them to attend. For a few weeks, at least, they will exist apart from a world I feel increasingly powerless to change, and ashamed to leave them. 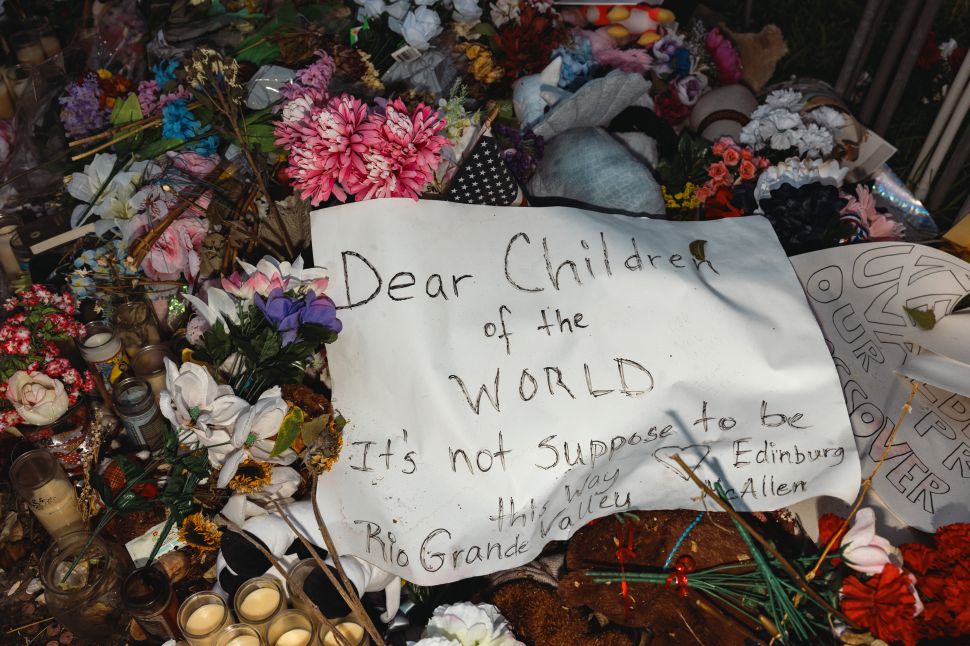