Workers at a Baltimore-area Apple store voted by a two to one margin to join the International Association of Machinists and Aerospace Workers last week, marking the first successful U.S. union drive at the tech company.

Campaigns to unionize Apple employees are part of a broader push by retail workers throughout the U.S. to organize. Though only 4.4 percent of retail workers are unionized, a tight labor market and an upswell in organizing by college-educated workers has spurred recent wins at workplaces like Apple, with employees at Trader Joe’s, Starbucks, and REI experiencing similar success. In order to translate these wins into sustaining union membership, however, workers will have to battle high turnover rates as well as broad employer opposition to organizing.

Even as Apple stores shuttered due to the omicron variant last year, the company brought in record profits. Apple workers who support unionization in Towson, Maryland, as well as at stores in New York City and Atlanta say they want a greater share of these profits, as well as more control over their scheduling and growth opportunities.

“You always hear Apple is a $3.1 trillion company … which is great, but the pay is not matching,” said Tyra Reeder, who makes $20 an hour working as a technical specialist at the Towson store and voted in favor of the union. The cost of living in Towson, a suburb of Baltimore, is 27% higher than the national average, according to an estimate by compensation data company PayScale. Though Reeder’s primary responsibility is to help customers troubleshoot problems on their devices, she said she often feels like a therapist or even a punching bag.

The tight labor market has likely played a factor in the resurgence of organizing in the retail sector, said Ruth Milkman, a sociologist who chairs the labor studies department at the City University of New York. Though joining a union can threaten employees’ job security, the high number of available positions in the U.S. “takes the air out of the fear that workers might have of being fired.”

Labor movements have also gotten a boost from college-educated young people who have not found work that meets “their aspirations and expectations,” Milkman says. Such workers are leading labor movements at Starbucks, where a Buffalo-based Rhodes scholar has helped baristas unionize at more than 150 stores, and REI, whose successful union campaign in New York City had support from college-educated workers. Approval of labor unions is at its highest level since 1965 and its support is strongest among people aged 18-34, with 77% of Americans in this age group said they approved of labor unions, according to a 2021 Gallup poll.

College-educated workers’ dissatisfaction with work in the retail sector, combined with this generation’s embracing of “an anti-capitalist, intersectional worldview,” appears to be driving union campaigns at some retailers, said Milkman.

Can Apple help reverse a decline in retail unionization?

Though the pandemic and economic factors such as high inflation put additional stress on the whole of society, workers “feel the overwhelming brunt of this stress,” said David DiMaria, lead organizer for the IAM campaign at Apple’s Towson store. The union’s win shows that workers are “pushing back with a renewed understanding of their collective power and how to use it,” he added.

But for retail workers to translate election wins into sustained union membership, they’ll have to battle strong employer opposition to organizing.

Walmart, the nation’s biggest employer, has led the way for the retail industry by aggressively battling unionization at its stores for decades. In 2018, the company was forced to settle with employees it disciplined for organizing activities. Target has used similar tactics to fend off unionization and is now fighting an effort to organize employees in Christiansburg, Virginia.

In the weeks leading up to the company’s first union election, Apple shared talking points instructing store leaders to warn employees about the dangers of unionization, according to a memo obtained by Vice. The company has reportedly continued such messaging following the win in Towson, according to global solidarity union AppleTogether. Apple hasn’t responded to a request for comment about the Towson store election.

Another day at @Apple, another day of passive, captive, anti-union talking points.

This includes comments to “keep Apple Towson in your thoughts” — and explaining how unions sever the relationships between managers and their teams.

Neither representatives from the IAM nor the Communication Workers of America would discuss efforts to organize other retail workers, though DiMaria did say the IAM will assist any workers that reach out to them about unionizing. The CWA recently called off a union election that was scheduled for an Apple store in Atlanta following allegations that the company broke federal labor law by requiring employees to attend mandatory captive audience meetings. 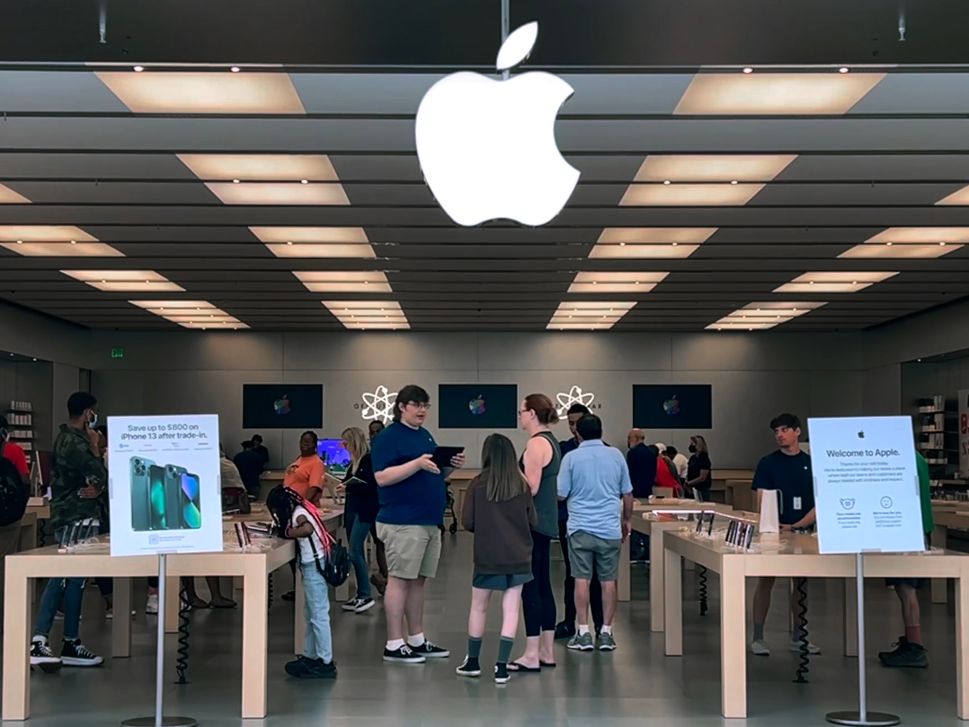