Elvis Presley has left the room, but not the screen.

The swiveling hips, the lubricated lips and the voice that sounded like it was coming from a mouth full of grits are back again, in an erratic, interminable, over-produced biopic by the sloppy Australian director Baz Luhrmann called Elvis. It’s an epic collage of images and sensations, but it is not a movie. Yet despite a surfeit of annoying flaws, I must add that it is also an occasional whale of an extravaganza. For today’s audiences, entertainment is all that matters, and Elvis has plenty of that in the title role, played by a glittery, overwhelming package of dynamite named Austin Butler.

Pardon my ignorance, but I’ve never heard of Austin Butler, who dominates almost every single frame of the movie in the title role. I never saw his numerous adolescent or teenybopper appearances as a kid on the Disney channel or in feature films like Aliens in the Attic. I did see him as a member of the Manson gang in Quentin Tarantino’s dismal Once Upon a Time in Hollywood, but the movie was so bad I don’t remember him. Apparently Baz Luhrmann did, because he put the young actor through a grueling two years of research, preparation, delays and hard work (the production wrapped in 2021) that resulted in a nervous physical collapse. I guess you could say it was worth it. Neither a singer nor a dancer, he gets it right and nails the signature jukebox hits in amber. On the talk shows, he’s a blonde who neither looks nor sounds like Elvis, so his triumphant work in the movie can only be described as transformational. Even if he’s not a household name, he commands this film with such authority and self-confidence that I’m sure we’ll all hear a lot more about him in the future.

Meanwhile, what about the film itself? Under the self-indulgent, disorganized leadership of Baz Luhrmann, I’m afraid it’s pretty much a mess.

Already established as a manipulative showman more interested in flamboyant and exaggerated sensations than narrative coherence, Luhrmann is simply clueless about how to pull a viewer into the vortex of a storyline. Levity is not his forte. Among his previous failures, he destroyed the literary reputation of F. Scott Fitzgerald with his trashy, overstuffed version of The Great Gatsby and the laughably misguided parody of John Huston’s Toulouse-Lautrec era Moulin Rouge with a disastrously miscast Nicole Kidman was about as French as a liverwurst on rye. That tacky, feverish dedication to style over substance would appear to be a perfect fit for the crude but colorful story of a poor backwoods hillbilly from Tupelo, Mississippi who became the king of rock and roll.

Unfortunately, instead of a deeply investigative biography told in a by-the-numbers summary of a crass and florid life, the director-screenwriter has chosen to abbreviate (or cut out entirely) the many fascinating biographical elements that made Elvis unique, concentrating instead on his turbulent relationship with his agent-creator and business manager, Col. Tom Parker—a control freak, a cad and a heel, played with an abundance of repulsive mannerisms and over-zealous gusto by Tom Hanks. Vilified as a lurid and massive fraud who milked Elvis of 50 percent of his income for 20 years and left him lonely, miserable, deserted, desperately ill and dead in 1977 from self-delusion and self-destruction at age 42, Col. Parker is played, warts and all, by a great actor badly in need of a strong director. Balding and bloated, Hanks is a grotesque lampoon of everything from Tennessee Williams’ Big Daddy to Colonel Sanders of fried chicken fame, padded beyond recognition and disfigured by a mass of prosthetics.  He comes out of the chute hateful, so there’s nowhere to go with the role.

Already established as a heel who betrayed clients Hank Snow and Jimmie Rodgers, he capitalizes immediately on Elvis’ twitching crotch, pelvic thrusts and borderline illiteracy, and encourages labels like vulgar and delinquent. Promoting the newfangled idea of a white man singing like a black man, the Colonel saw dollar signs multiply. Luhrmann’s sketchy screenplay leaves such huge gaps in the trajectory that you move through the whole movie asking more questions than it ever bothers to explain. For instance, the film never delves significantly into the reasons why the public bought into the publicity, or how Elvis developed from a carny vision with greasy hair and pink socks into a movie star with limited appeal. One minute he’s an amateur discovered at a state fair in Memphis; one minute later he’s signing seven-picture deals at Paramount and cutting gold records. What happened during the years between Las Vegas and Hollywood? Elvis himself laughs off his mediocre film career, but the movie fails to add that his co-stars in those bombs included Barbara Stanwyck, Angela Lansbury and femme fatale Lizabeth Scott.

When this movie ends, you won’t know one thing more about Elvis than what you knew going in. No character is developed beyond a one-paragraph analysis. Olivia DeJonge is wasted as Priscilla Presley, the love of his life who left him drug-addicted and an overweight blob with a declining career, and the actors who play B.B.King, Hank Snow, Big Mama Thornton, and Little Richard have been reduced to the status of walk-ons. The assassination of Martin Luther King is a mere footnote. The closest Elvis himself comes to a character with real feelings is in a scene where he sits on the broken letters in the Hollywood sign and talks about the career he defines as meaningless. Who was Elvis Presley? None of the fragmented Elvises depicted here.

I remain especially curious about his military career, about which any one of the real facts is more mind-boggling than anything else in the film. In truth, Elvis did everything in his power to avoid the draft and never forgave Col. Parker for not pulling more strings to get him dismissed from duty. Instead, during his two-year enlistment the Pentagon offered him continual invitations with the Special Services unit that would require only six weeks of basic training and return him to superstardom in Las Vegas. Col. Parker turned down the offers because any public appearances would mean working for free, and he forbid anyone other than himself to profit from the Elvis Presley empire, including the United States army. Instead, while he was stationed in Germany, Elvis lived off-post in a five-bedroom house with his whole family, threw lavish all-night parties in hotel suites in Paris, and became addicted to barbiturates and amphetamines. He was miserable and in tears and worried about the damage two years out of the spotlight would do to his career, while treating his time in uniform as new photo-ops. Elvis Presley never dies, but an unequivocally gripping, emotionally effective and quintessential movie about him still begs to be made. Baz Luhrmann’s Elvis is not the one. 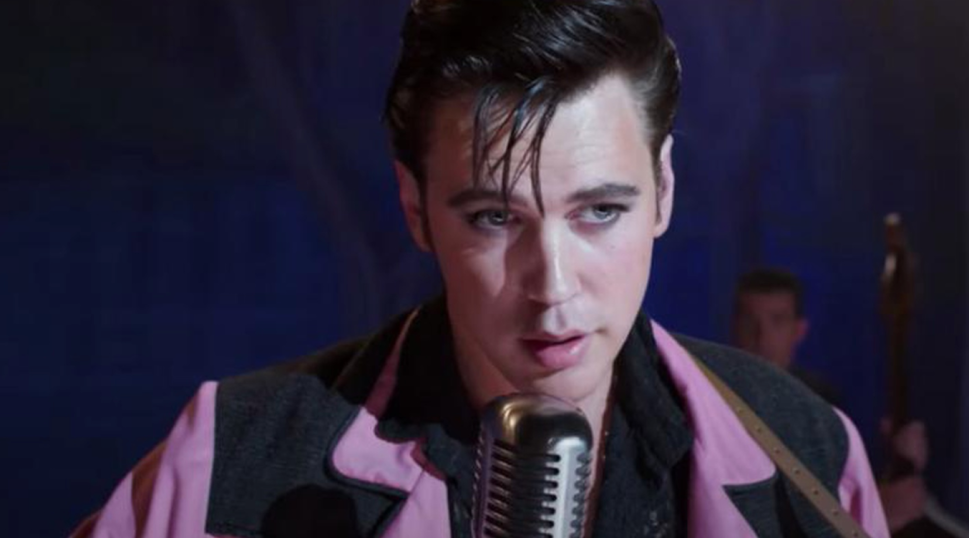