Beautifully designed and photographed, sensitively written and directed by England’s acclaimed Terence Davies, and impeccably acted by a distinguished cast that turns life into art, Benediction is one gorgeous motion picture. It carefully chronicles the turbulent life and times of Siegfried Sassoon, the revered British anti-war poet-novelist-philosopher and political activist, like the meticulous peeling of an orange. Although at this writing it is only June, this is the best film I have seen so far in 2022.

Sassoon is played by a wonderful young British actor, Jack Lowden, who also co-produced. His celebrated rant against the political maneuvers and motives perpetrated by the British government began as early as 1914. While serving in the military in World War I, he suffered a nervous breakdown and was sent to a mental institution in Scotland as an arrogant conscientious objector. Self-controlling, passionately refusing to act on impulse and forcing himself to be emotionally passive to avoid confronting his fear of homosexuality, he had already spent his time as a soldier seeking the two things that drove his inspired literary output and his tortured search for the morality of high ideals that plagued him for the rest of his unhappy life. In Scotland he found both the compassion and friendship he craved from a doctor (Ben Daniels) who acted as a guiding fatherly figure and fellow devotee of “the love that dare not speak its name,” and experienced his first brush with romance  with another patient. “Quick to tears, slow to love” is the way he described himself in one of his famous poems after his companion was returned to his unit on the battlefield where he died a week before the war ended. It was his introduction to life as a complex but disillusioning philosophical puzzle that was never solved.

The post-war years found Sassoon engaged in a series of love affairs with men, most famously the great, witty and legendary musical star Ivor Novello, remembered to this day as a competitor of Noel Coward and heralded as the British Cole Porter. Jeremy Irvine makes a cool, devastatingly handsome Ivor Novello and even sings a perky arrangement of “And Her Mother Came Too,” a song Bobby Short used to perform, decades later, from his throne at the Cafe Carlyle.  Microscopic research by director Davies includes some of Novello’s best bitchy lines (he called Edith Sitwell “an animated meringue”) and probes deeper into his internal psyche than most of his fizzier profiles through the years have dared. He was a great snob (“The only problem with knowing one’s place is that other people never seem to know theirs”) but a terrible person, friend, and lover—untrustworthy, selfish, indifferent and a total cad. Heartbroken after being cruelly dumped, Sassoon indulged in numerous affairs after Novello, including an architect, a novelist, a German prince and Glen Byam Shaw (Tom Blyth), actor, theater producer, and Novello’s former lover. Not all of them are depicted here (the film is long enough already) but the longest (six years) was with Stephen Tennant (terrific Calam Lynch), an effeminate aristocrat with tuberculosis, reduced to the status of a joke with pomades, face creams, outrageous wardrobes and a terror of aging.  The actors in these roles are all superb. So are Simon Russell Beale as Sassoon’s oldest friend and advisor, Geraldine James as his mother, and Lia Williams as a fascinatingly colorful Edith Sitwell, who reads from her renowned but initially critically barbecued “Facade.”

In 1933, Sassoon married Hester Gatty (a sublime Kate Phillips), a loving and sympathetic partner who knew all about his affairs and offered him the unconditional love and loyalty he longed for anyway. There’s one very moving scene near the end of Sassoon’s life when his ex-lover, Stephen Tennant (fragile  and lonely, still plagued with T.B. but desperate for a reunion), arrives unannounced to visit Sassoon (now played by the elderly Peter Capaldi) and Hester (who has morphed into Gemma Jones). It is Hester who offers tea and sympathy to her husband’s old lover and Sassoon who rebukes and dismisses him. Despite all of her dedication and hard work, the loveless marriage was polite and dispassionate, but failed to bring him the happiness that always eluded him and when he died in 1957, on the eve of his 81st birthday, it had dissolved. It produced one son they named George, who lived until 2006, but Sassoon was never able to express the love he felt for his son, either.

Still, when he died, Sassoon was the recipient of numerous war trophies and literary prizes. Books, plays, film and television shows have been produced about him. He was the darling of the London social set and a declared favorite of, among others, Winston Churchill, steamship-line heiress Lady Cunard, dance legend Léonide Massine, Edith Sitwell, and T. E. Lawrence (yes, that Lawrence of Arabia). Ending up isolated and alone, his friends all dead, haunted by the past, his work under-appreciated by the masses, his was a sad story that leaves an ache in the heart. Slow but never ponderous, Benediction, the deserving tribute Terence Davis has paid to his extraordinary failures and triumphs, more than makes up for what’s been unfairly overlooked in the past. Color it unforgettable. 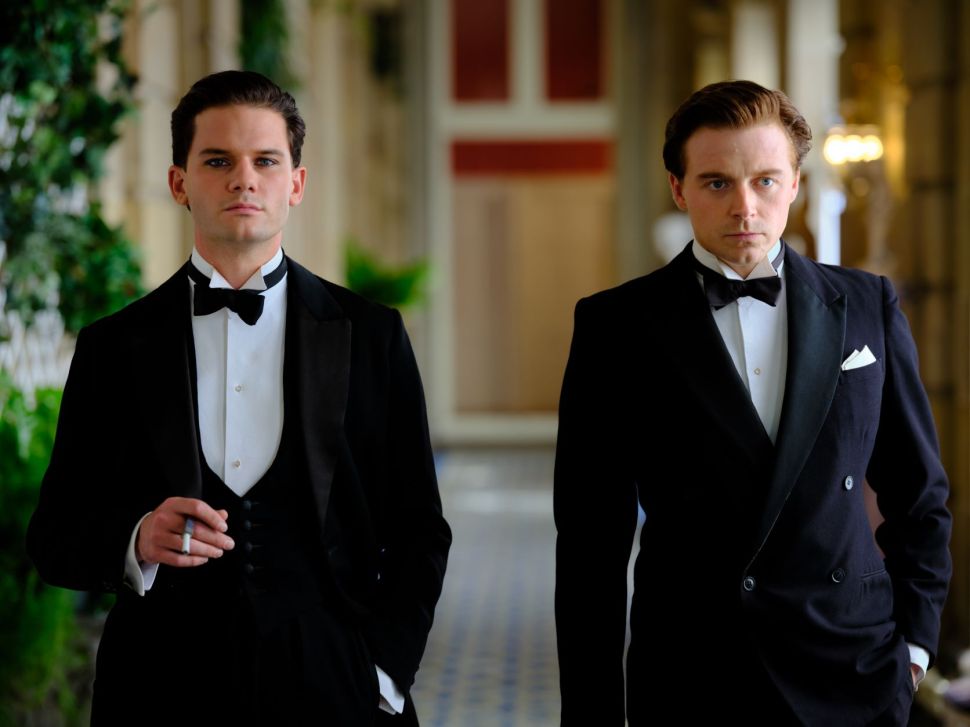