Crimes of the Future is a load of crap. I would like to find a more civil way to describe even a sick and depraved barf bag of a movie like this one, but it defeats every reasonable attempt to try. Publicity poopery declares it “From the mind of David Cronenberg.” That’s your first warning signal. I’ve been able to endure a few of his epic horrors in the past, but 90% of the time  I’ve found no evidence of any kind of mind at all. Still, in what has become of a film industry badly in need of triage,  wonders never cease. Quick on the heels of its world premiere a few weeks ago in Cannes, where it was shown to audiences who walked out in droves, loudly booed and declared “unreleasable,” Crimes of the Future is now upon us, like a rabid raccoon.

The star is once again the visionary, dynamic, and always surprising Viggo Mortensen, who added depth and dignity to a pair of vastly superior Cronenberg films, Eastern Promise and A History of Violence. It’s a crime to see the waste of his time and the disintegration of his body and talent in this freak show, but he’s always marched to the sound of his own drummer, and you’ve got to admire his loyalty to the man who wrote and directed this bomb. He and French actress Léa Seydoux, who is both incompetent and incoherent in English, play a pair of demented performance artists in some dystopian futuristic society where human evolution has gone terribly awry. Only a handful of people can experience pain, infections have vanished, and everyone is qualified to perform surgery, which has taken the place of sex. Mortensen specializes in an act in which Seydoux hacks away his organs, tattoos them so they can be identified and passed on to others, and in the process we are introduced to a creepy ensemble of geeks who treat us to endless encounters with projectile vomiting and long, bloody hypodermic needles inserted into intestines and tumors to create “art.”  Sewing wires through lips and growing hideous sores throughout the body signifies Cronenberg’s vision of a New World future in which slicing open a woman’s feet and face in front of an audience is a new kind of show business.  As more of Mortensen’s body is ravaged, Seydoux strips down, bends over his operating table, and licks his bleeding wounds. Did I fail to mention this cinematic snafu is not for the faint of heart?

The movie opens with a mother smothering her sleeping child to death and goes steadily downhill from there. One scene does not follow another. Images just sort of invade each other while you hope something will make some sort of sense.  Unfortunately, logic is nowhere in sight and nothing in the movie makes any sense. As repellent and revolting as it is, I was astonished to find it doubly boring.  At the screening I attended, a lot of people walked out, but even more people were snoring. Eventually it becomes so silly that it sinks into a pandemic of farce.  The acting is uniformly dreadful, including Kristen Stewart, who plays the head of something called the National Organ Registry, which sponsors the “Inner Beauty Pageant,” a popular event in which people with surgically inserted organs can display their holes, sutures and scars, and handsome Canadian heartthrob Scott Speedman, who plays the father of the murdered boy in the opening scene.  The antics all lead up to an onstage autopsy of the child that I could barely sit through.  The big reveal: he was born with a plastic processing digestive system.  So you can leave this world behind if you eat the same indigestible plastic in the form of a purple candy bar that looks like a toxic Almond Joy.  “If the police perform an autopsy and open up his body, what do you think they’d find?” asks Speedman.  “Outer space,” says Mortensen.

All of the caterpillar-paced loopiness builds to a catatonic ending in which the incomprehensible Seydoux feeds Mortensen the purple candy bar made of microplastics. Obviously, it’s the end of their act, but nothing is explained, including the point of the thing, if there is one. The film has no dynamic, which explains why it has so little impact. Crimes of the Future is Grand Guignol to a new level of incomprehensible gibberish—the kind of self-indulgent, IQ-wrecking trash on film for which landfills and garbage dumps were invented. 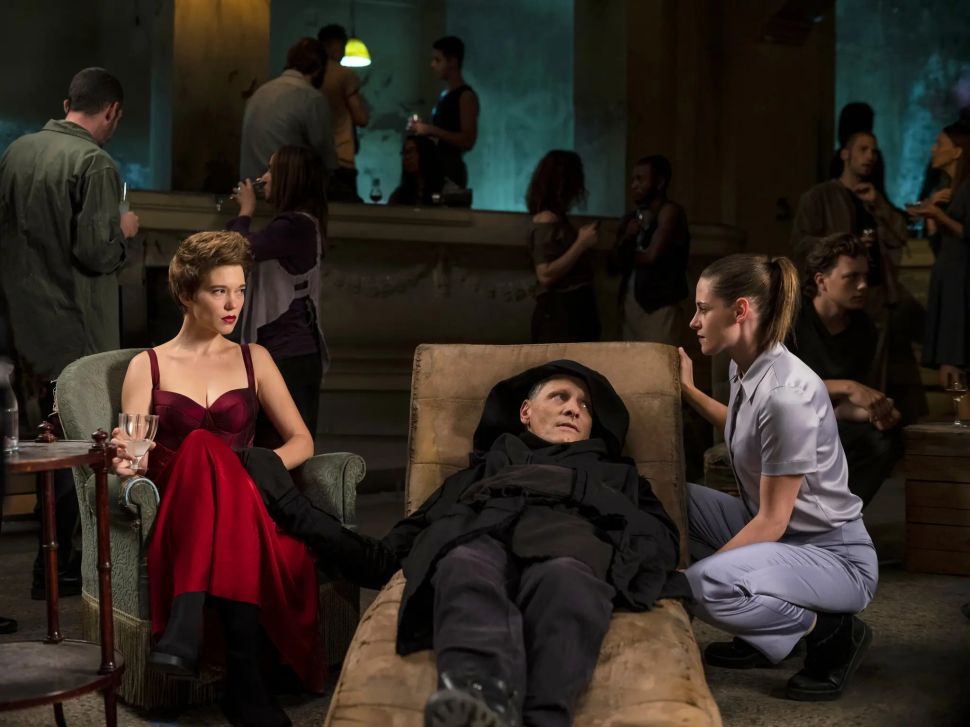