For the first time since the mid-1970s the Metropolitan Opera is performing into June after recently establishing an annual month-long hiatus during the winter. The very enthusiastic applause that greeted two premieres over Memorial Day Weekend suggested that the Met does extremely well with hot-weather audiences. Superlative casts and conductors raised both Rigoletto and The Rake’s Progress to must-see status before the season ends on June 11!

Saturday evening saw the return of Bartlett Sher’s sumptuous but boneheaded production of Rigoletto that opened on New Year’s Eve. Sher always has his good reasons to spin Michael Yeargan’s set: to distract the audience from what it should be paying attention to. I believe that after this production and Simon Stone’s recent revolving Lucia di Lammermoor Peter Gelb must alert all future directors that the Met’s turntable is off limits!

Happily, Verdi’s melodrama was again exceptionally well served by an almost entirely new set of principals. The one holdover was Quinn Kelsey whose extraordinary interpretation of the title role has only grown since December. His unusually nuanced approach might lack the bitter snarl of some past Rigolettos, but his empathy for his character’s blindly destructive paternal devotion made the tragedy all the more poignant.

Though Kelsey was frightening in his fierce “Cortigiani” denunciation, few Rigolettos wield such seamless legato and dynamic variety as the Hawaiian baritone. His three duets with Gilda reminded us once again that Verdi is at his most moving in father-daughter interactions. Kelsey has been particularly lucky at the Met this season in being paired with two such entrancing Gildas: Rosa Feola during the winter and now Erin Morley in her house debut as yet another of opera’s good women who love bad men!

Ludovic Tézier and Kristina Mkhitaryan were originally announced for this run but each dropped out a while ago; it’s unlikely though that anyone was disappointed by the substitution of Kelsey and Morley. The in-demand, sweet-voiced soprano, who earlier this season headlined Matthew Aucoin’s uneven retelling of the Eurydice legend at the Met, triumphed just last week as Lakmé with Washington Concert Opera. She portrayed an unusually feisty Gilda whose desperate need for independence from her over-protective father leads to disaster. One never doubted her firm resolve to sacrifice herself for a man who doesn’t deserve her.

Her dreamy “Caro nome” was dotted with exquisite trills, and Morley also vividly conveyed Gilda’s maturation not only dramatically but vocally. As she recounted her seduction/rape by the Duke, her voice took on darker, richer overtones: she had clearly been changed by the experience. If one wanted a bit more power in the storm trio, her dying duet with her devastated father soared with aching pathos abetted by ravishing piano high notes.

This exquisite Gilda’s death was even more crushing as Stephen Costello’s peculiarly diffident Duke exuded little allure. While his secure, Italianate tenor handled the punishing high tessitura with some flair, his blankness on stage left an important hole in the drama. However, two Met debutants made stronger impressions, though Yulia Matochkina’s slatternly Maddalena took the entire quartet to warm up. Afterward she revealed a strong, gutsy mezzo that one wouldn’t mind hearing again in a more rewarding role. As her murderous brother, arresting Croatian bass Ante Jerkunica plunged into the depths of his creepy music with slimy dark confidence. He, too, should return to the Met often.

When conductor Karl Mark Chicon canceled at the last minute—making it 0 for 2 this season for the Garanca-Chicon family—the Met tapped Karen Kamensek who has been having a grand success with the Akhnaten revival. While she’s been a longtime champion of the very different music of Philip Glass, Kamensek’s versatility was demonstrated by her strongly dramatic Verdi performance. Though much different from Daniele Rustioni’s more transparent Rigoletto reading in the winter, Kamensek drew fine playing from her orchestra and accompanied her singers exceedingly well on what was probably little rehearsal.

How unexpected to note that three women conductors led four performances in a row at the Met! Eun Sun Kim’s run of La Bohème ended on Friday, followed by Kamensek in charge of Akhenaten in the afternoon and Rigoletto in the evening. Receiving a rousing heroine’s welcome ovation as she stepped onto the podium, Susanna Mälkki then led Monday’s revival of Stravinsky’s Rake’s Progress. The Finnish conductor, absent from the Met since she debuted in 2016 with Saariaho’s L’Amour de Loin, has been frequently mentioned as a possible successor to Jaap van Zweden as music director of the New York Philharmonic. Her crisp, yet soulful reading of Rake proved more moving than that of James Levine’s spikier interpretation. Levine of course held a monopoly on Stravinsky’s score with the company for nearly 20 years.

The Met’s social media touts Rake as a “satire” which Jonathan Miller’s sleek 1997 production plays up at times. However, Mälkki’s fine cast, particularly Golda Schultz and Ben Bliss, dug deeply into the profound suffering beneath W.H. Auden and Chester Kallman’s intricately witty text which is based on a series of iconic 18th century paintings by William Hogarth charting a knave’s rise and fall.

The South African soprano glowed with urgent purpose despite the obstacles Anne Trulove faces as she seeks to rescue Tom Rakewell from his disastrous Faustian bargain. Schultz’s radiant soprano exceled in the lengthy scena that concludes the first act; it culminated with a shining high C that stunned the audience into a rapturous ovation comparable to the one Morley received after “Caro nome.” After Tom ends up confined in Bedlam, she comforts him by spinning a luminously haunting lullaby which soothes both him and us.

Bliss (whose name might have served for another Auden/Kallman character) made a less caddish, more sympathetic Tom than usual. His helpless, repeated capitulations to the nefarious Nick Shadow were made less painful thanks to his easy, golden tenor and immaculate diction. After Shadow cursed him with insanity, he drained his voice of color in a striking evocation of madness that rivaled any soprano’s coloratura rhapsodies.

Bliss and his Shadow (get it?) even resembled each other; tall, elegant and bearded too, Christian van Horn expanded his devilish Met repertoire that began with Boito’s Mefistofele several seasons ago. His stentorian approach however lacked a needed subtle insinuating quality. In her Met debut Raehann Bryce-Davis embraced with relish the brassy scene-stealing histrionics of Babe the Turk, Tom’s bearded bride. The American mezzo has recently been garnering notice for her dramatic roles but she clearly enjoyed showing off another side of her talents. It was difficult to judge how she might fare at the Met as, say, Azucena, but she sounded lovely in her brief, concerned exchange with Schultz in the auction scene.

The Met’s Rake was the perfect addendum to New York City Ballet’s recent Stravinsky Festival which celebrated the 50th anniversary of George Balanchine’s spectacular salute to the composer. Even though more than a century has passed since the scandalous premiere of The Rite of Spring, Stravinsky can still be a challenge to some. Monday’s Rake was only the Met’s 27th performance of his neo-classical masterpiece, but the company has done a commendable service of making it available once more to New Yorkers who shouldn’t miss the opportunity how accessible it is. Take it in, as well as the musically powerful Rigoletto, before opera at the Met disappears for three months. 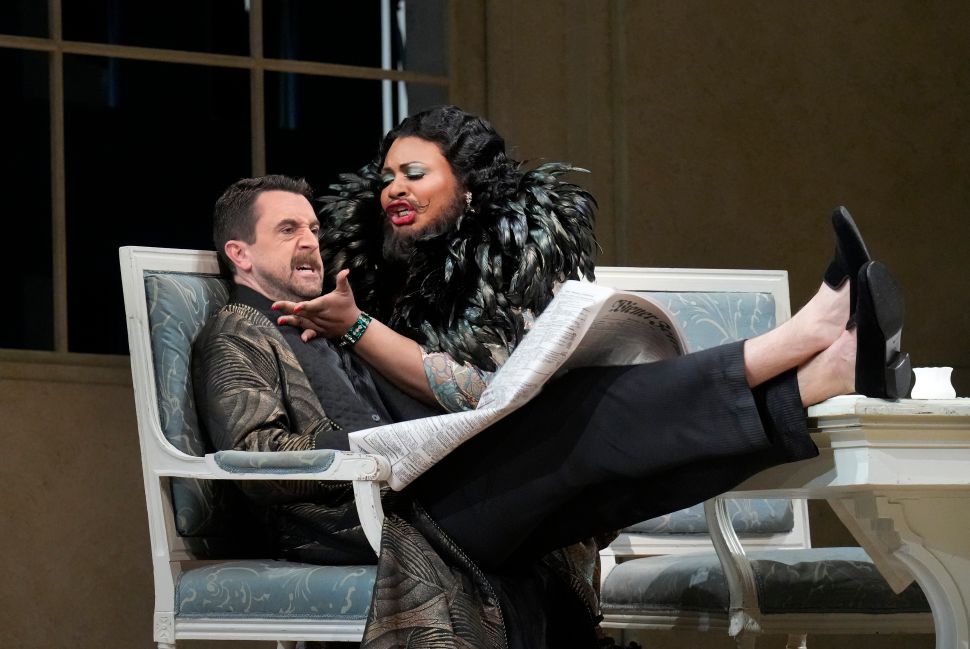