In new works on show in Queens and Manhattan, artists Lydia Ourahmane and Cristina Iglesias explore the depth and expanse of physical memory, the multiple spaces offered to inhabit and reimagine, and the permanence of ruminations. In their respective artworks—which fundamentally converse with each other—the two women artists place the human experience of historicity at the core of life’s uncertain journey.

Tassili refers to the UNESCO heritage site of Tassili n’Ajjer, a hard-to-reach desert plateau located in southern Algeria, close to the borders of Libya, Mali, and Niger. The site, a dramatic lunar landscape dominated by vertical sandstones, is home to prehistoric stone and cave art and other engravings.

The 45-minute-long film is a scenic dream which takes us from footsteps—following Ourahmane and her team meandering their way through passages and open spaces—to aerial vistas revealing an awe-inspiring panorama playfully unveiled behind lens flares and accompanied by sound-bath-like acoustics. The camera alternates between licking the basking, blinding light of the desert, to stroking the more subdued and mysterious shadows of caves where silhouettes of ancestors, animals, and spirits project the spectral remanence of a lost world, the lost city of Sefar.

Between a feeling of ascent and a symbolic regression, eroded monoliths that rise like desiccated trees, cave drawings, and carvings come alive in a post-human experience of the uncanny. One drawing in particular, estimated to date from 12,000 years ago, depicts a haunting spiritual figure, a “Great God” who refuses to vanish.

Tassili conveys disorientation as a suspended language in which seeing, as well as listening, play a key role to confront the notions of invisibility and transmission. Music accelerates like a beating heart; it further pulsates under a high noon sky. Primordial hunt scenes adorn silent caves that appear like cul-de-sacs. Geology is the canvas of a reacquainted cosmology—of beginnings, and endings. In the contemplation of the sky and the heights of the sandstone pillars, we feel an unbearable weight, a slow agony which musically complements the impression of an allegorical polyphonic death scene.

For Spanish artist Cristina Iglesias (b.1956), her public art installation at Madison Square Park’s Oval Lawn, which will be there until December 4, is about reviving a landmark in the former swamp area. The Cedar Creek, once flowing through the land where the park stands, is now buried underground. This is also true for Minetta Brook and other forgotten urban streams, which only appear as serpentine capillaries on 19th-century New York City maps.

In five sculptural bronze pools that play with mirrors and fountain grass textures, Iglesias fools. Her intricate visual illusion of the creek exposes an open scar and an effulgent spine. I walked barefoot along the recreated stream on a rainy early summer evening, feeling a nourishing sense of reverence and unexpected harmony. In challenging manipulated spaces and simplified topographies, the artist discusses indigeneity, historical legacies, and the violence of modern urban spaces. A refreshing commission for Madison Square Park Conservancy which has sorely lacked in recent times.

Similar to the camera of Tassili, Iglesias’ fountains channel cyclicality, an endless loop of fortitude and inescapability in the rust and knots of forgotten days. There’s a common stubbornness between the two artists in not wanting to let go, in the documentary-like and forensic effort to walk the present in the shoes of yesterday. During archaeological excavations and field work, there are often “happy surprises” yet the labor presented in these artworks betrays persistence and a conscious effort towards embracing iterative detours and artistic rigor.

These are above all explorations into the pluralities of truths and multilayered realities. For Ourahmane, it’s an identity-affirming quest against erasure. Professor Brahim El Guabli, teaching at Williams College, recently wrote of “Amazighitude,” explaining his relationship to his indigenous native language, Tamazight, as something “both intimate and elusive.” Tassili scrutinizes the sacred in the profane. Can home and homeland ever be detached from the realm of an untouchable shrine?

This is less visceral but no less urgent for Iglesias’ hydraulic pursuits when it comes to New York City. Her latest work complements a four-decade-long commitment to immersive and site-specific installations reconciling man and aquatic nature. Rewilding and reclaimed locations are gaining more momentum as cities are turning inhospitable and one fantasizes over the actual restoration of Cedar Creek and other streams. Why not? The city of Seoul reversed decades of absurdist urban development in 2003 when it replaced a hideous expressway with a restored stream (buried during the 1970s) and a park. Not without challenges, the revitalization of the Cheonggyecheon Stream has brought a sense of respite from urban planning madness—which makes it all worthwhile.

Both artists understand the malaise arising from us and our surroundings being out of sync. They expressed a double human need: to be simultaneously grounded and elevated as part of an ecocultural consciousness. It’s not without danger as under such intense inspection, both polarities can crash. It’s the case during a gripping scene of Tassili when the stone returns to being a stone, or when one of the usual Madison Square Park dog crowd disrupts a brief oneiric experience of contrast and liminality.

Ourahmane reclaims a narrative previously dominated by colonial “discoveries” and anxious accounts of sub-Saharan migration, radicalization, and smuggling. Instead, she reflects on what a postcolonial effort entails. Her works have previously featured in 34th Bienal de São Paulo (2021) and the New Museum Triennial (2018) among other institutions, with her recent shows, Survival in the afterlife (2021) and Barzakh (2021) revisiting archives, family, and community in the context of Algeria’s recent religious history and politics.

Iglesias, winner of the UK’s Royal Academy Architecture Prize in 2020, has exhibited solo institutional shows in Spain, France, the UK, US, Germany and more, in addition to public commissions such as Forgotten Streams (2017) by Bloomberg’s new European Headquarters in London and has represented Spain at two Venice Biennales (1986, 1993).

“History is often dealt with as a violent excavation, uncovering the past by any means. We don’t hold space or allow it to speak for itself. It’s about claiming ownership of that discovery and not caring about the consequences,” Ourahmane said, in conversation with fellow artist Sophia Al-Maria in 2021.

Is a postcolonial future more than an eternal return to pre-colonial times, we wonder as these restorative steps leave lingering the question of what next. 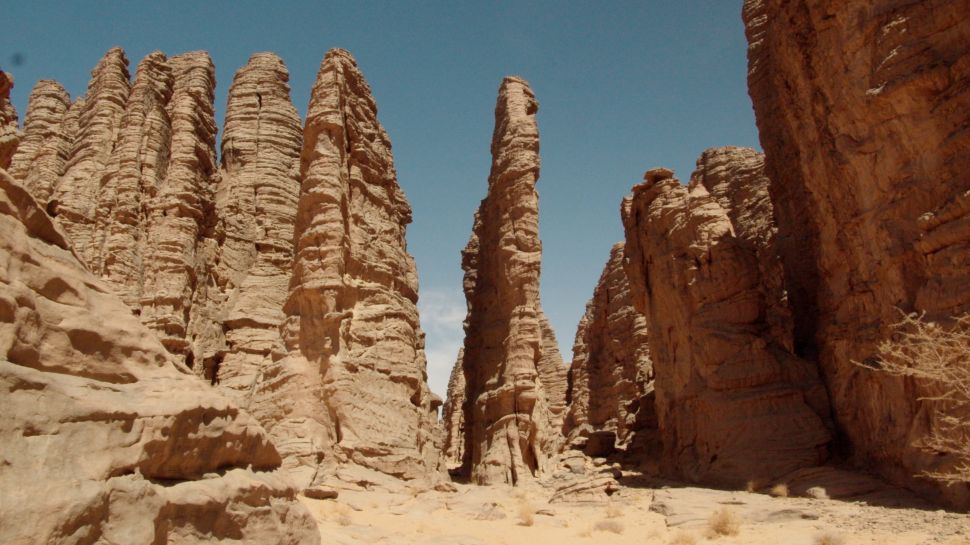