Modeling agencies, once the primary conduit for connecting models with gigs, are fading in relevance. As print catalogs vanish and companies turn to online influencers, agencies are no longer able to supply models with steady work. The trend was only exacerbated by the Covid-19 pandemic, which canceled fashion shows and prompted cuts to advertising budgets. In an effort to control their careers, models both new to the industry and already established have turned to social media to find gigs.

On Facebook, models and photographers gather in groups to seek and advertise jobs. One New York City group created in 2018 has more than 50,000 members. They post samples of their work with captions detailing collaborations they’re interested in—some paid but many not, an arrangement common for up-and-coming models and photographers looking to build out their portfolios. This new, decentralized system has broken the barriers erected by agents and designers for decades. Eliminating these gatekeepers has also reduced the leverage many of them have historically abused to exploit models.

Models are finding that working on their own can also be a perilous business, and social media’s low barriers to entry create a space for bad actors to take advantage of models, both financially and sexually. But in this new world, models aren’t waiting for institutional change or recognition. That never did much to clean up the old modes of labor exploitation in the modeling world, which is largely unregulated, difficult to unionize, and lacks proper reporting mechanisms. Instead, models have begun to turn the very social media tools used to prey on them against this new class of abusers, as well as the old, publicizing on Facebook groups and popular Instagram accounts the bad acts of everyone from fake photographers to famous designers.

Briy Gilgeous, a New York based model, is represented by two agencies but still relies on social media apps to find work. Her primary agent, too busy with an overstuffed book of models, rarely lands her assignments. Instead, Gilgeous finds her own collaborators via Facebook, Instagram, and Backstage, a LinkedIn-like app for the entertainment industry, then relies on her agent chiefly to negotiate her fee.

“People who were gatekeepers in the past are now losing their grip because of social media,” Gilgeous said. “I think that’s also why I’m starting to see success.”

The pivot to social media has also helped free models from the narrow aesthetic sensibilities and target audiences of big agencies. Gilgeous has been modeling for 10 years, but at 6-foot-2, with a shaved head and an athletic build, she doesn’t conform to the gaunt look favored by the haute couture world. With social media, she has built her brand outside the traditional fashion world, appealing to “the girls, the gays, and the theys,” as she puts it.

Arguably the greatest beneficiaries of this shift are models at earlier stages in their careers. Dion Fullard, who goes by Chun Swae—like the Nikki Minaj song—signed with a boutique modeling agency last year. But in the months since, he’s found social media a more reliable source of work. His agent often fails to reply to his emails, and the agency has only booked him two jobs, both of which fell through (he doesn’t plan on re-signing). Meanwhile, he’s booked reputable runway jobs for himself through Instagram advertisements, hashtags, and Facebook groups. While much of this work is unpaid, it’s essential to building his portfolio, and it mirrors the unpaid test shoots agencies book for their new models.

The traditional agency structure still has its uses, and can benefit models because it might shorten this period of unpaid work. John Paul Pfeiffer, a so-called mother agent who takes on first-time models and works with different agencies, said agents are incentivized to find their models work because that’s how they get paid. He said he is also uniquely positioned to find markets in which a model’s look is best suited, expertise a model might not have on their own. At the same time, he said, a model’s trust in their agent is sometimes misplaced, because agents can see them as disposable.

Taking the social media route isn’t without its risks either. In January 2021, Donald Monroe, an Instagram user with the handle @vxfashion who claims to be a talent manager, promoted a competition on social media where the winners would qualify to attend a casting call. The competition included unusual tasks, like interacting with and promoting the @vxfashion page. It had 1.2 million followers and brimmed with videos of celebrities vouching for the brand, including boxer Floyd Mayweather and Shark Tank’s Kevin O’Leary.

Swae entered the competition, like many other early career models. He liked and commented on Monroe’s pictures, and posted the casting call to his Instagram story—all tasks required to move on in the competition. Swae became suspicious after Monroe posted a celebrity endorsement from singer Trey Songz. The video, Swae told me, included a logo for Cameo, an app where users can hire celebrities to send personalized, scripted messages. Upon revisiting Monroe’s many endorsements, Swae realized they all appeared to have been purchased through Cameo, with their careful cropping and impersonal messages giving them away. He ended communications with Monroe, but other models weren’t so lucky.

Aspiring model Shania Glover lost money to Monroe. The 22-year-old lives in Statesboro, Georgia, a city about 60 miles inland from Savannah. Her location wasn’t the only hurdle in making it big, but her petite frame also held her back from breaking into runway work. Glover found the @vxfashion account when a friend posted Monroe’s model call to their page, one of the tasks required in the competition. She did the same. Gover recalls a phone conversation with Monroe when he pressed her to answer how much money her dreams were worth. She ended up paying him $100, believing he’d be her agent. All he did, though, was send her two videos to watch. Nothing more came of the arrangement.

“I knew the rule of thumb, about not paying anyone to get you on a runway or in a photoshoot,” Glover said. “But I thought I was taking a leap of faith.”

Lyneareya Williams, another model who lost money to Monroe, had a similar experience. Monroe said he’d set her up with auditions and video shoots but after Williams paid him $50, he told her she’d never make it in the modeling world and stopped responding to her messages. She requested a refund on CashApp. He declined it. Another model, Cece Merlot, paid Monroe at least $500 believing he’d provide development classes, new portfolio pictures, and casting information. Instead, he told her to watch a VogueTV documentary from 2008 and bought ghost followers for her account. She reported his CashApp and Instagram account, and filed a claim with the Federal Bureau of Investigations’ Internet Crime Complaint Center. When she requested a refund, Monroe declined it.

In a hyper-competitive industry, models are itching for any break they can get. They see an account like @vxfashion, with its many markers of legitimacy—a large following, an impressive interaction rate, celebrity endorsements—and they assume it must be real. Today, @vxfashion has 2.4 million followers. When contacted for comment, Monroe didn’t dispute any of these allegations, beyond calling them “your False Facts.” Instead, he responded with memes about work ethic, a video rant about haters, a series of messages criticizing my Instagram account—“low followers low likes and low comments”—and said, “My rates start at $50,000 for a interview.” He then sent me pictures of myself he’d found on the internet.

Other risks exist when models rely on social media to find work. David Powers is an Ohio photographer who booked work through social media platforms. Police records note that on October 30, 2020, two people reported being sexually assaulted by Powers during photo shoots. Last year, Ohio prosecutors indicted Powers on four counts of rape, five counts of gross sexual imposition, one count of attempted rape, and one count of kidnapping. The indictment lists three people he engaged with, two of whom were named in the police report. Powers, who has denied all charges, posted bond at $50,000 and is awaiting trial in July.

Models use Instagram to expose exploitation in the industry

Before law enforcement got involved, models who worked with Powers took to Instagram to share their experiences with him, posting them anonymously to an account called @i.shotwith.ek.andlived. The “ek” refers to his business: EK Photography.

Social media has expanded the whisper networks models once relied on to caution each other about predatory figures in the industry, networks often unavailable to the newest and most vulnerable models. One high-profile example is @ShitModelMgmt.

Originally a model-themed meme account on Instagram, in 2018 Shit Model Management turned to a more serious pursuit: exposing exploitation in the modeling industry. The account’s anonymous owner, who did not respond to interview requests but has described herself as a former model in past media interviews, asked her followers for names of people in the industry who had assaulted them. The response was overwhelming, and she soon published a list of 450 names, nearly half of whom more than three people reported.

One risk of this approach, which traditional whisper networks largely avoided, is defamation lawsuits, and after receiving personal and legal threats from some of the accused, the owner deleted the list. The account, which today has almost 250,000 followers, still publishes accusations in Instagram stories which disappear after 24 hours—their impermanence seems to have diminished the backlash—and models say they’ve come to consider Shit Model Management a central repository for warnings about bad actors in the industry.

Whisper networks are, by definition, not official complaints, nor are their allegations formally investigated. There is no appeal process for the falsely accused. Some who appeared on the Shit Model Management list, like model scout Lanny Zenga, have publicly condemned the list. Zenga, who has denied any wrongdoing, told The Cut that reports should be handled in “a responsible and critical setting.”

But many models say no such setting exists in their industry, leaving social media forums and accounts like Shit Model Management the only means of recourse available to them. State and federal labor laws generally categorize models as independent contractors rather than employees, which means they cannot unionize, are not ensured minimum wage or overtime pay, are not covered under many workplace discrimination laws, and have fewer protections against workplace sexual harassment. The widespread reliance on Shit Model Management and its ilk is a testament to this legal regime’s inadequacy. Slippery though Shit Model Management may be, it fills a void, a self-help remedy for a workforce disempowered by law.

That could soon change for some models. On March 25, the New York Senate introduced a bill that would consider modeling agencies as employers rather than booking managers, thus giving agency-signed models more rights. The bill has passed the state’s Senate Labor Committee and is now working through the Senate Finance Committee, which precedes being voted on by the state Senate. But even if it becomes law, it would do little for early-career models relying on social forums to find work. For now, social media is all they have. 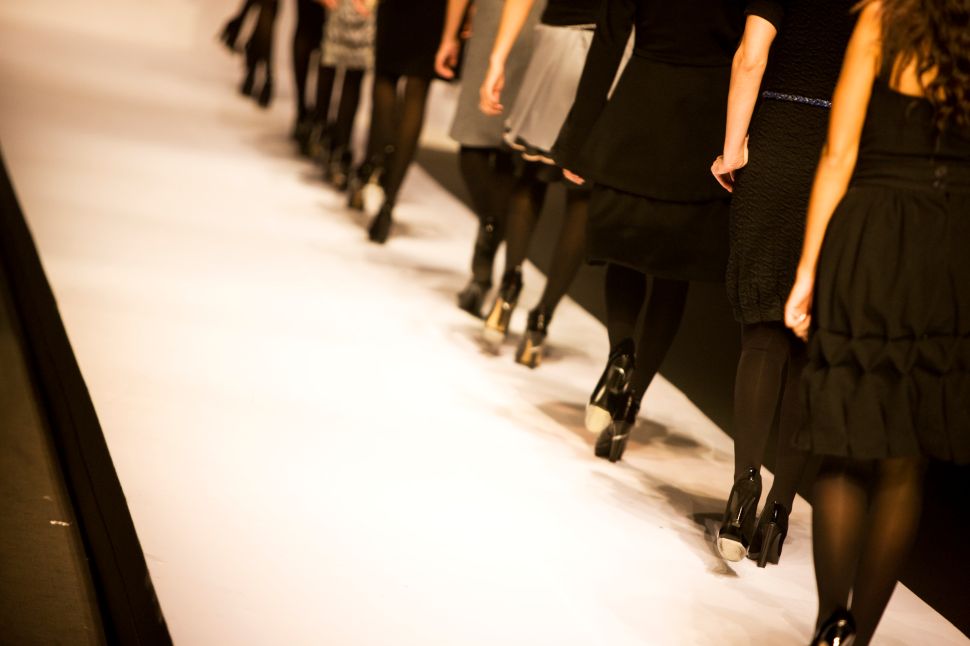