For almost three decades now, much of the fun of these dinosaur films has been the cathartic thrill of seeing strangers’ expensive family vacations get ruined by realistic CGI monsters culled from our childhood fascinations. Who hasn’t stood in one of those unmerciful lines at Space Mountain and not wondered about all the ways the situation would be improved—or at least mercifully brought to an end—by some triangulating Velociraptors on the hunt?

But just as many of us have had to accept that the price of travel and health concerns have made dream vacations at least a temporary thing of the past, so has the Jurassic World franchise moved far beyond its resort era.

In the latest film—the supposed last of a limp but profitable trilogy that began with 2015’s Jurassic World and once again overseen by that film’s director Colin Trevorrow—dinosaurs have permanently jumped the fence and are now living among us. You can find various species nesting in skyscrapers, trampling construction sights, chomping on crab traps, and competing with ducks for breadcrumbs by a pond.

It is a situation apt to produce some bold, drive-in worthy pop images—early on, trilogy star Chris Pratt rides horseback on a snowy Northwest plain among a herd of horn-topped dinosaurs and ropes one—and some fascinating ideas about the nature of life and humanity. Of the former, Jurassic World Dominion has a memorable handful; of the latter, it is utterly bereft.

It does not help that the movie is profoundly disinterested in its characters, or even giving them anything at all compelling to say. The script, written by Trevorrow and Pacific Rim: Uprising co-screenwriter Emily Carmichael, when not bubbling over with a synthesis of half-baked technobabble and nature proverbs, reads like a mid-’80s self-help book. “You are the only you that ever was,” a mom (Bryce Dallas Howard) tells her adopted daughter (Isabella Sermon), who herself is an exact genetic clone of her birth mother.

The trademark move of Chris Pratt’s animal handler Owen Grady is to hold his hand up in the air and make his eyes really wide, like a crossing guard who just woke up from a nap. That’s about as deep as his character gets.

Granted, lack of character development should be no surprise to anyone who caught 2018’s anemic lava-filled franchise installment Jurassic World: Fallen Kingdom. But it’s especially dispiriting to see this sandblasting of individuality hit a trio of holdovers from Jurassic Park, the 1993 Spielberg behemoth that started it all: Drs. Sattler, Grant, and Malcolm (Laura Dern, Sam Neill, and Jeff Goldblum, respectively). Neill in particular spends much of this movie looking like a weekend warrior searching for the right aisle at Home Depot.

While Bryce Dallas Howard’s Claire Dearing gets no more help than the others, the camera adores her angular, expressive face. Dominion was mostly shot on 35mm and 65mm film by original Jurassic World cinematographer John Schwartzman, and the movie does have individual moments of joyful cinematic effusiveness, like wide shots of genetically modified locusts—lit on fire—winding their way into a dinosaur’s mouth. It’s almost enough to make you forgive the cardboard-cutout characters and lack of narrative momentum.

Almost. But with emotional investment at an all-time nadir and the story structure as flimsy as possible, there is no bulletin board on which to pin Jurassic World Dominion’s occasionally inspired snapshots.

Instead, the film seems hellbent on demonstrating just how out of gas it is. Again and again there’s a false moment of relief followed by the manifestation of a so-called terror exactly one beat later. Trevorrow does not add one fresh idea to this franchise.

We are simply too far along in this technological revolution to think that the computer generated creatures themselves are enough, no matter how artfully they are arranged.

“You never get used to it,” says Dern’s Dr. Sattler, rubbing the nose of a baby dinosaur. If only we were so lucky. 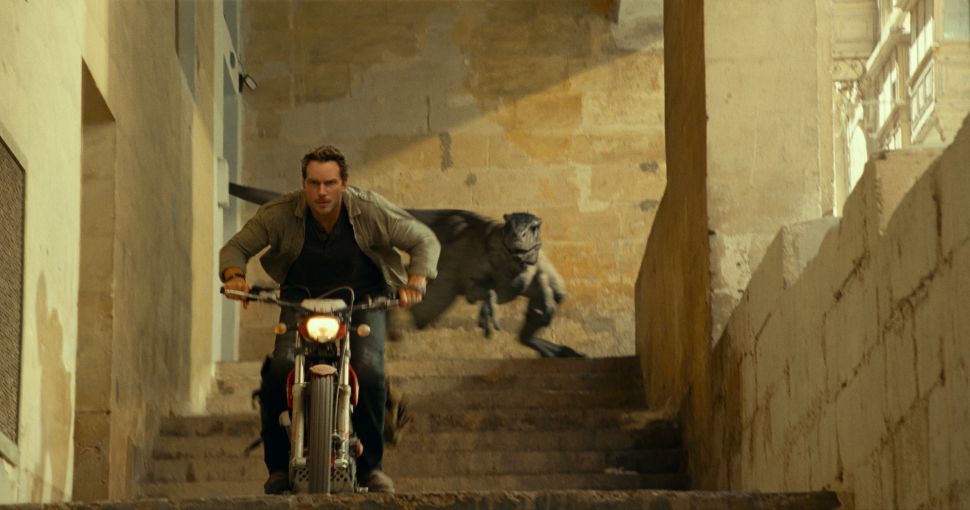