When Westworld debuted on HBO in 2016, it would have been hard to imagine just how much the series has changed over the course of three seasons. Like the 1973 Michael Crichton film on which it’s based, the series initially took place at an intricate theme park where the rich and powerful could role-play as 19th century ruffians, killing and screwing the lifelike robotic residents (or hosts) to their hearts’ content. While the hosts’ rise to sentience and violent revolution was forecast from the very beginning, Westworld has now continued far beyond the fall of its titular resort and into the “real world,” chronicling the ongoing power struggle between humanity and artificial intelligence with nary a cowboy in sight. As the series has broadened in scope, it’s also compounded in complexity to the point that, by the end of 2020’s Season Three, it became damn near impossible to keep track of the character’s allegiances, to decide who to root for, or even to parse the literal events of the narrative. Happily, the fourth season, which begins Sunday, June 26th, is the most legible and the most fun Westworld has been in years. It’s still a mind game, but it no longer feels as if you’re playing against a computer.

Season Four picks up years after the rogue android Dolores Abernathy (Evan Rachel Wood) gave her life slaying Rehoboam, the omniscient AI predicting and dictating the fates of every human being on Earth. Though scarred by the war to essentially dethrone God, her human disciple Caleb Nichols (Aaron Paul) has returned to living a more normal life. This peace is short-lived, of course, as both he and the technopathic super-Host Maeve Millay (the always terrific Thandiwe Newton) are being hunted by the massive Delos Corporation. Showrunners Lisa Joy and Jonathan Nolan have used this season’s time-jump to set up fresh new relationships to explore. Caleb and Maeve, who had only just met at the end of last season, now share a close bond and unshakeable trust, the origins of which are explored via flashbacks. Teaming them up as the core protagonists immediately solves one of Season Three’s greatest frustrations, which was that nearly every character with sympathetic motivations was under the thrall of someone with either ambiguous or clearly malevolent intent. After two consecutive seasons of moral gymnastics, most of the characters have finally become clearly delineated between protagonists and antagonists.

In a parallel subplot, Bernard (Jeffrey Wright) returns from the virtual world of the Sublime and hopes to use the knowledge he’s accumulated from millions of simulated futures to prevent a potential doomsday. Wright gives as solid a performance as ever, but the less contemplative tone of this season means that he gets to flex even fewer of his acting muscles than he did last year, which is unfortunate given what a showcase the earlier seasons were for his talents. He’s also still metaphorically handcuffed to Stubbs (Luke Hemsworth), a total accessory of a character who exists only so Bernard has someone with whom to share exposition aloud. On the plus side, Evan Rachel Wood gets a distinct new character to portray, Christina, a video game writer who appears to have no knowledge of her nature as a synthetic being but seems haunted nevertheless. Her foil on the show is her roommate Maya, played by recent Oscar-winner Ariana DeBose, who along with Caleb’s family represent the everyday human stakes of the story.

While the grizzled bastard William (a.k.a. “The Man in Black, played by Ed Harris) is still in play, the big bad of the season is Charlotte Hale (Tessa Thompson), a copy of Dolores’ mind who has grown more merciless and Machiavellian than her ancestor. Thompson’s performance remains the show’s most fascinating, as she continues to blend her well-studied impression of Evan Rachel Wood’s portrayal of Dolores with glimpses of Thompson’s original character and the years “Chalores” has spent evolving into a distinct personality. Charlotte has become the distillation of all of the worst parts of humanity and artificial intelligence, betrayed by both sides so completely that she now trusts only herself. Where she once wished to create a better future for all hosts, her definition of “her kind” now only includes those whose minds are copied directly from her own. The Dolores variant from last season sought to unshackle both humans and hosts from their pre-programmed paths; her progeny, Charlotte, wants to be the one doing the programming. Charlotte’s nakedly evil plans give nearly all of the protagonists a single outcome they wish to prevent, which simplifies the narrative significantly.

Which is not to say that Westworld has suddenly become a breezy viewing experience. Joy, Nolan, and company are still up to many of their old tricks, setting up puzzles to solve, throwing in twists both predictable and outrageous, and playing with the audience’s perceptions of time, memory, and reality. This is still a series in which you should never, ever, assume anything. It is, however, far less taxing on the brain, which can help one enjoy the other ways that the series has improved since its (still superior) first season. Westworld outgrew its uncomfortable obsession with sexual assault as a means of heightening drama and defining character all the way back in Season Two, but that year’s story found other ways to foray even deeper into misery porn territory. Season Three was less depressing, but so cerebral that a viewer could barely spare the brainpower to process joy. This time around, you’re permitted to relax enough to realize how rad it is that Thandiwe Newton is playing a robot with superpowers who carries a katana. I would not previously have described Westworld as an action-adventure show, but I would now, even though neither the quality nor quantity of the action has significantly changed. It’s simply a matter of tone; you only call something an “adventure” if it’s fun. 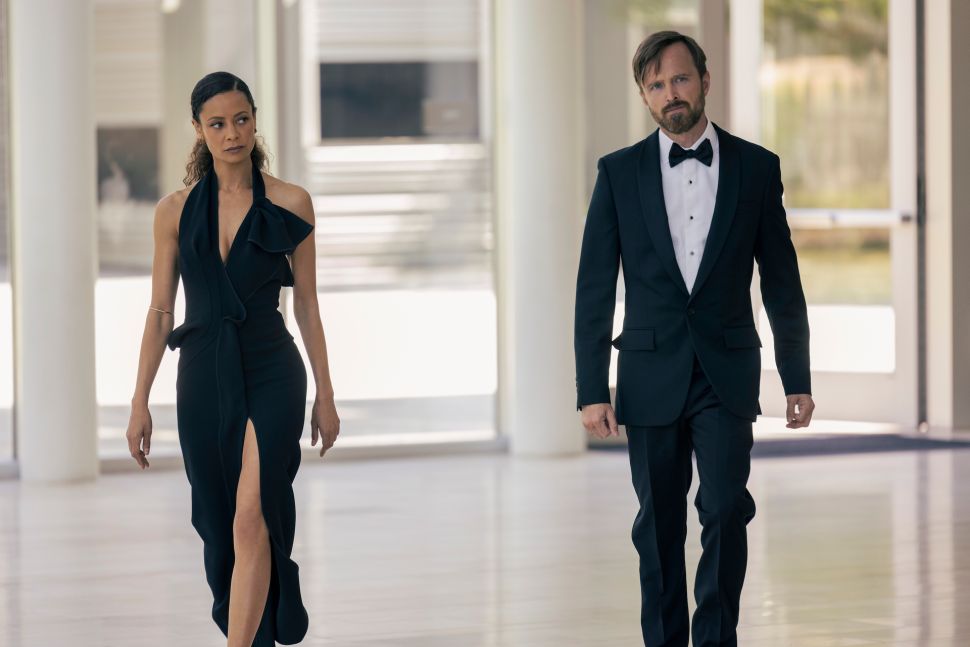