The first, and last, person seen shuffling (in tiny Tim Conway-like steps) across the stage of the Jerome Robbins Theater at the Baryshnikov Arts Center is Mikhail Baryshnikov himself, in a rare acting turn. He is Firs, the ancient, faithful-to-a-fault manservant of The Orchard (as the Chekhov play is known in this production), cutting a zigzag trail through cherry blossoms that have fallen from an early frost.

It will be a winter of profound discontent for Firs and the aristocratic Gayevs he pampers—particularly the widow Lyubov Ranevskaya (Jessica Hecht) and her brother, Leonid Gayev (Mark Nelson), both willfully oblivious to the social changes that will cost them their estate.

Anton Chekhov labeled this, his last play, a comedy and was understandably mortified when Konstantin Stanislavski premiered it at the Moscow Art Theater as a tragedy. The issue is still debated. Trevor Griffiths has said he finds it “objectively comic and subjectively painful.”

Weighs in Hecht: “I think it’s a comedy in that there is a lot of human idiosyncrasies, which created very funny moments. In terms of behavior, it’s very funny, and, anecdotally, it’s very funny, but really I don’t know if you can look at it and not feel the loss of family.”

Fiddler on the Roof, which she revived on Broadway, “shows the same thing. People think, ‘Oh, they’re going off, but they will find one another again’—and they never do.” It’s an aspect of The Orchard that resonated with Baryshnikov: “Misha said he never saw people that he left when he was 26. He never saw them again, and many of them were political people. They just disappeared. That’s hard to imagine as an American.”

The Ukrainian-born Igor Golyak, who conceived, adapted and directed this production which runs from June 16 to July 3, also insists these characters won’t see each other again.

“The idea of being a family amidst this nightmare of being ripped from your home is what he wanted to mine in this play,” explains Hecht. “Just what is it for a family to go through something like that? Obviously, we’re looking at it through the lens of each individual, but what is it to say goodbye to your family? That’s what he’s after by all these images.”

And, of course, the play’s theme of an era coming to an end is sharply echoed by what Golyak’s homeland is now going through with the Russian invasion. “It’s extremely difficult, obviously, for him to make a statement about the war. We all feel disempowered by it, but Igor feels deeply, deeply responsible to his community. He created a theater of refugees in Boston. That’s how he started. He was selling ads in telephone books, and he slowly raised enough money to start this storefront theater for Russian and Ukrainian refugees.”

Hecht has been one of Chekhov’s Three Sisters, but Ranevskaya is—joyfully—a first. “I love Chekhov, and I’ve always wanted to do this role, but it wasn’t until Igor presented me with this idea that I really thought about it. He proposed developing The Cherry Orchard for a smaller cast and making it multimedia. That’s all he said.”

Dominating the set is a 12-foot robotic arm that sweeps floors, serves coffee and takes snapshots, projecting the moving images on a stage-encompassing scrim. “The head of this creature has cameras in there and light and can create these projections,” Hecht explains. “You’re acting in a stage production, but you’re also trying to adjust it delicately so you don’t look too big.”

She adds: “What’s so interesting about Igor’s work is, yes, it is of this moment technologically, and, yes, it’s pushing the multimedia thing—but the acting is delicate.

“You don’t want to see everyone roaring or some kind of bloated human behavior. You want to see real people in the face of technology. Our essential nature should not be changed—hopefully, only enhanced. Our own emotional lives should not be altered for these bigger multi-media productions.”

Kuka, the company that manufactures the 12-foot robotic arm and other robots (this one is named Ronin), is a collaborator and partner in the show. They provided the manpower to create the robotic moves free of charge because they are trying to find a place for them in the art world, whether it’s theater or dance or film—a way to use this technology in performance pieces.

The rest of the set—that which isn’t layered in cherry blossoms—is dotted with nursery-room bric-a-brac: a rocking horse that Leonid used to ride, and a spinning top which Ranevskaya still twirls to calm herself. It’s symbolic of a brother and sister who refuse to recognize their privileged life is coming to an end. His disinterest in a regular job and her extravagance have put their heavily mortgaged country home up for auction by the bank.

It is suggested at one point that they could save their estate if they sold off their beloved cherry orchard and converted it into plots of land for summer homes. The notion horrifies Ranevskaya because of her aristocratic upbringing. “She imagines that somebody is going to save her, even though she knows in reality that there’s nothing forthcoming,” Hecht proffers. “She has always been saved at the last moment—literally by somebody giving her  money—and she thinks somebody’ll sweep in and help her. This time, it doesn’t happen.”

If Hecht and Nelson have a sibling simpatico, it’s no accident. They have not only worked together before (in Arthur Miller’s After the Fall), they teach at HB Playwrights Studio.

And what does Hecht have to say for their faithful manservant? “To work with somebody who is as artistically accomplished as Misha is a thrill. People of that level of greatness you encounter only a few times in your career.  I think that it probably falls into two categories of people who have done so well in their lives. Some people, sadly, believe that they are superhuman or they adopt the identity of the diva. Then, there are people who are humbled by it all, and Mischa is so modest, so collaborative, so interested in the work that I am literally blown away by him. I really cannot say enough good things about him.” 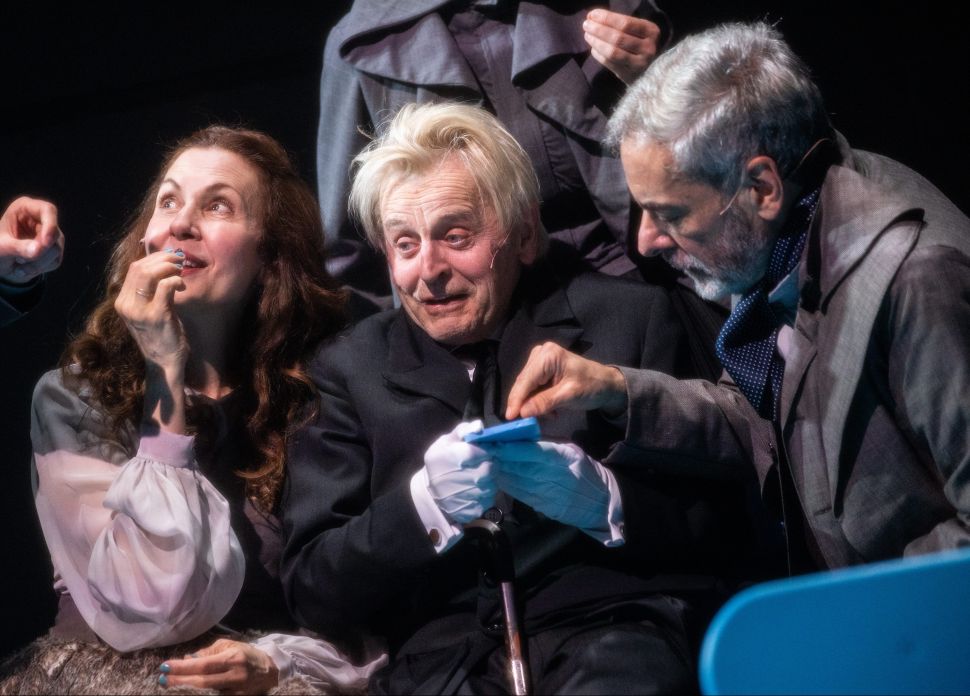